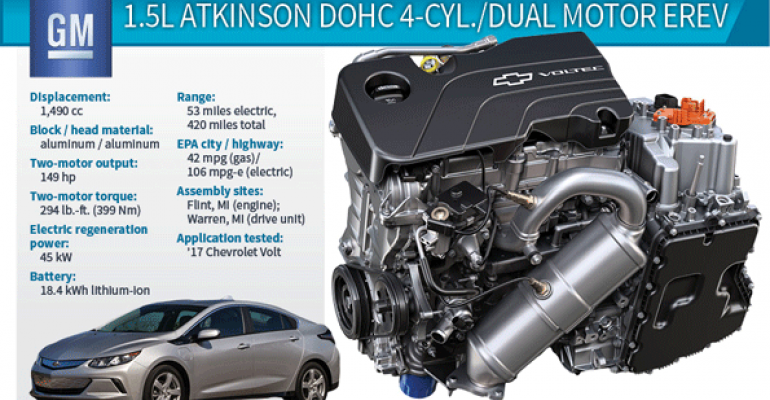 WardsAuto’s 10 Best Engines competition has recognized outstanding powertrains for 23 years. This installment of the 2017 “Story Behind the 10 Best Engines” series looks at the development of the second-generation Chevy Volt propulsion system.

Most observers agree that General Motors missed a prime opportunity after its innovative battery-electric EV1 failed in the marketplace in the late-1990s.

After that setback, it jumped right past gasoline-electric parallel hybrids to more expensive “2-mode” hybrids intended primarily for trucks, and much longer-term fuel-cell research while Toyota leapt into the eco void with its Prius hybrid, followed by a variety of others, to become the perceived leader in environmental friendliness.

GM’s EV team did build some parallel-hybrid prototypes back then but couldn’t work out a winning business case for production. GM decided the cost of HEVs couldn’t be justified by the projected efficiency gains over much more affordable advanced conventional powertrains.

Then Bob Lutz arrived in 2001 as vice chairman of product development. He convinced his bosses that ceding eco-friendly leadership to Toyota’s parallel hybrids was a major mistake because, even if each one was sold at a loss, they would result in more effective brand building than pouring that same money into advertising.

But instead of trying to imitate Toyota, Lutz pushed GM engineers to create something special to one-up the Prius. That goal became the Chevy Volt extended-range EV.

When the first-generation Volt was named a 10 Best Engines winner after it was launched in 2011, WardsAuto editors called it, “a car that revolutionizes mobility” and “a magnificent achievement that marries the best attributes of all-electric vehicles with those of fun-to-drive, fuel-efficient gasoline cars.”

“The key was to be better in every measurable way,” says GM Global Vehicle Chief Engineer Barry Walkup. “We even spent a lot of time and effort on optimizing 0-to-30 mph (48 km/h) acceleration and drivability because customer feedback said that while they didn't get many 0-to-60 mph (97 km/h) opportunities in city driving, they did get a lot of 0-to-30s.”

Walkup says the biggest challenge was integrating the powertrain to make the transition from all-electric to engine startup, as well as the stop/start system, as smooth as possible.

“Our goal was to keep the engine quiet,” he says. “We didn't want clunks or bumps or any indication that it has started. We torque-match the electric motor to the gasoline engine and pre-fill the cylinders with gas during stop/start, which allows the engine to start quickly.

“We coordinate the fuel and air controls and optimize the powertrain mounts to filter out engine vibration, dampen engine noise with acoustical damping and desensitize the car to noise and vibration. We wanted to maintain the electric vehicle perception even when the engine is running.”

Another challenge was ensuring the drive-unit-mounted integrated power electronics could survive significant powertrain vibration, especially if the engine misfires.

“Through chemistry changes, we dropped the cell count while increasing its capacity. We have a partnership with LG Chem, and we're continually refining the chemistry for additional range.”

Engineers rethought and redesigned the car, which rides on GM's new compact Chevy Cruze architecture, and its entire Voltec powertrain, including the control wizardry that once the battery is depleted, continually finds the most efficient blend of electric and gasoline torque.

While it shares many parts with the new 1.5L I-4 used in other GM products, the Gen II engine’s combustion process and calibration are specific to the Volt. Its larger displacement not only improves fuel efficiency but also provides more torque, which contributes to the Gen II Volt’s surprising quietness.

Another major improvement is the capability to use both motors at any time, as motor or generator, in EV or range-extending mode, which enabled a 60-lb. (27 kg) lighter drive unit. Mounting the power electronics directly atop the drive unit got rid of the Gen I's big and expensive orange connecting cables and eliminated another 40 lbs. (18 kg). Still more mass reduction came from eliminating one of the Gen I's two drive-unit oil pumps.

The transmission also is improved significantly. “The Gen I had a big motor and a medium-size motor inside it, while the Gen II has two medium-size motors that enable better torque transitions and less mass. Kind of an electric CVT, it’s now compatible with the Malibu Hybrid and other platforms.”

“Think about all the individual parts and systems that go into a vehicle,” he says. “They all have to be integrated to work together seamlessly, and our Milford Proving Ground integration teams are a huge part of that. Sometimes when you're driving other vehicles, they feel like they're about 80% done. I think we have an advantage over our competition in how we integrate and how we are able to launch a vehicle that is 100% ready.”

There were reports in July, after Walkup was interviewed, that GM might discontinue the Volt in 2020. Whatever happens, the Voltec propulsion system and its various components almost certainly will live on and power other types of vehicles, which it already is doing.

“We are committed to the Volt for the long-term, and you're starting to see some of its components spill over onto other platforms like the Malibu Hybrid, which has a lot of the Volt system in it,” Walkup says.