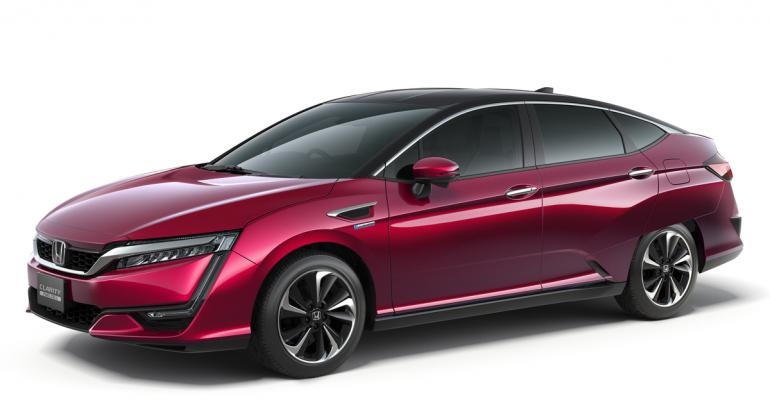 The cost of the technology, the energy required to produce the fuel and the resulting well-to-wheel emissions make FCVs less than green, concludes a Hong Kong-based investment firm.

TOKYO – He’s not alone among critics of fuel-cell technology, but he’s made one of the best cases for why fuel-cell vehicles may have less upside than some industry players – particularly Toyota and Honda – think.

“The cost of the fuel cells, the cost of building a hydrogen network and the fact that hydrogen isn’t green all raise serious questions,” says Chris Richter, managing director of investment firm CLSA. “You get hydrogen from reforming natural gas, thus it’s an odd decision to spend money for a technology that doesn’t really solve the (carbon-dioxide) problem.

“If you want to make it truly green (through solar energy or electrolysis of water), then it’s going to add cost to an already-expensive system.”

In contrast, Richter, who comes down on the side of battery-electric technology with qualifiers, notes the power grid is already there. “Thus, the set of problems is smaller. Effectively, you have a fueling station in your house if you own an EV.”

Further detailing problems facing proponents of fuel-cell technology, he warns the biggest is where the hydrogen comes from. “While a fuel-cell vehicle is indeed zero carbon emissions on a fueling-pump-to-wheel basis, it leaves a lot to be desired when the source of the hydrogen is considered,” he says.

At present, 95% of hydrogen is produced from steam reformation of methane, mainly natural gas, and gasification of coal.

“This implies, considering that 1 kg of hydrogen generates nearly 12 kg of CO2, that the car generates 175 g of CO2 for every mile driven, compared to 167 g emitted by the (gasoline-electric hybrid) Prius.

“Moreover,” he says, “to make clean hydrogen requires 12 times as much electricity to come up with the equivalent amount of hydrogen to power up a battery-powered vehicle. It is very demanding on freshwater resources. You need 2.5 gallons (9.5 L) to produce 1 kg of hydrogen.”

“The bottom line: I am not 100% convinced that EVs will take on the world, but I’m pretty sure we’re not going to a fuel-cell world,” Richter says.

Turning to EVs, the Tokyo-based analyst cautions the main obstacle continues to be battery costs. And while CLSA has been neutral on prospects for EVs and plug-in hybrids – predicting sales of nearly 2.5 million units in 2020 – Richter is nevertheless a realist.

An added incentive that extends beyond the auto industry and the so-called “legacy” makers such as Toyota and Honda is that EVs are “relatively simple devices,” which is why Richter says the industry also has Tesla.

“Tesla couldn’t exist if it were necessary to have an internal-combustion engine,” he says, adding electric and hybrid vehicles represent better business models because most of the intellectual property on IC engines belongs to traditional automakers.

“Electrification – along with autonomous driving – creates opportunities for new entrants.”

Since launching the Mirai in December 2014 and through August 2016, Toyota has sold and leased 1,680 units, including 910 in Japan and 770 in export markets. Honda, which launched its Clarity counterpart in Japan in March, has not disclosed sales results but reportedly plans to lease 200 units in the model’s first year.

Elsewhere, Hyundai, which launched the Tucson fuel-cell vehicle in 2014, has sold or leased 500 units to date.

Expected to join Toyota, Honda and Hyundai in that segment in 2017 are Daimler, Ford, Nissan and Renault, followed by Volkswagen, General Motors and BMW in 2020.

Rising OE Interest in Fuel Cells Has Ballard Back in Light-Vehicle Game
Aug 26, 2016