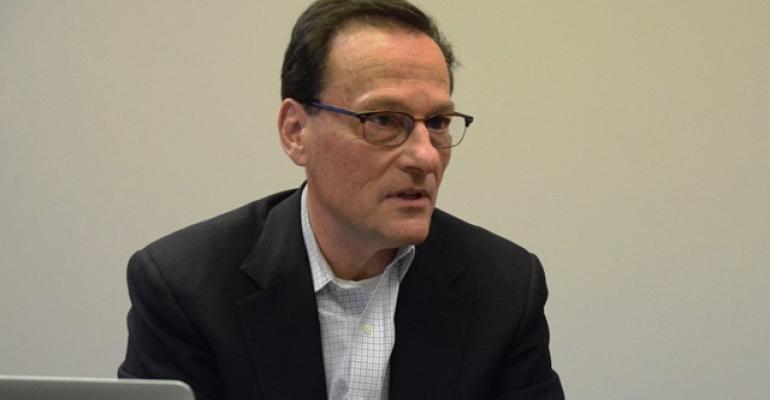 FCA&rsquo;s Bob Lee says OEMs may be waiting six weeks&nbsp;for vehicles to clear EPA certification because of a backlog caused by VW&rsquo;s emissions scandal, which also triggered an internal audit at FCA. &ldquo;We looked at 2 million lines of software code in the last month,&rdquo; he says.

The EPA’s pledge to conduct more rigorous emissions testing to ferret out offenders such as Volkswagen’s illegally rigged diesel engines is forcing automakers to bake in an extra four to six weeks so vehicles can clear the certification process on their way to showrooms, a Fiat Chrysler executive says.

Within the past month, the federal agency has alerted automakers of the backlog in certifying every automaker’s ’16 model, says Bob Lee, FCA’s vice president-engine and electrified propulsion systems engineering.

“The letter said, ‘Please be aware that some undetermined amount of time longer will be required to approve your request for certification,’” he tells WardsAuto editors during a recent interview.

Lee estimates ’16 vehicles with carryover engines will need an extra four weeks for certification, while models with all-new powertrains could need six weeks or more to clear the process. Still, he knows it’s only a guess. “We don’t have any idea if that’s enough (time) or not.”

For the U.S. market, automakers conduct their own emissions tests and submit findings to the EPA’s test lab in Ann Arbor, MI, which reviews data and grants certification, denies it or requests additional information.

“There’s about a one-in-four chance they will say, ‘Give us that vehicle. We want to test it,’” Lee says. “Then it goes to Ann Arbor, where it will go through the full test sequence there.” Every Fiat Chrysler vehicle called in for further scrutiny has passed, he says.

With about 400 light vehicles available each year in the U.S., the EPA does not have capacity to test every one of them.

In the case of Volkswagen, the German automaker admits some of its software engineers included code that identified when emissions were being tested on diesel vehicles. If so, equipment designed to scrub oxides of nitrogen emissions were functioning properly.

But when vehicles were being driven by real-world customers, away from test benches, the emissions controls shut off, resulting in better performance and fuel economy but exceeding tailpipe limits by a wide margin.

VW has recalled some 11 million vehicles worldwide, including a half-million in the U.S., with plans to fix the vehicles.

The VW case illustrates the vast differences between the emissions certification process in the U.S. and Europe. Lee describes the U.S. process as “interactive” and says California regulators routinely ask for detailed engine-control algorithms, the logic behind them, the supporting data and all the calibration.

“It’s a diagnostic, so they have the right to ask for it,” he says. “It’s back and forth.”

However, in Europe, Lee says there’s no such process. “There are rules, but there’s no checking, no asking, ‘Is this OK?’ There’s no going through algorithms like… in California. None of that.”

When the VW story broke, Lee ordered his engineers to scour the engine-control algorithms for similar “defeat device” codes. “We looked at 2 million lines of software code in the last month,” he says.

In his discussions with colleagues at rival automakers, Lee finds everyone’s in the same boat. “We’ve all been through the same exercise. We’ve all looked and dug and scraped, and we probably know our systems better in the last month than we’ve known them for the last few years.”

FCA engineers have been looking for software that could be calibrated to violate the rules. “It’s not against the rules to have something (used for test procedures) that could be turned into a defeat device,” Lee says. “You’re only guilty if you have used the defeat device, which was the case at VW.”

The internal audit at FCA was extensive. “What is our software-control process? Are we as good as we think we are? This is the right time to ask that question. Second, do we have any software that could be misused if you could find the requisite number of people to make it happen?”

As a result of the VW case, the EPA is requiring additional on-road tests of gasoline and diesel engines using portable emissions measurement systems installed onboard. Lee says the EPA has 23 PEMS devices already in use for heavy-duty truck testing.

“But that’s not nearly enough to test everyone’s vehicles if we are going to keep doing this across the board,” he says. “They will have to buy some more equipment.”

About a month ago, the EPA hosted an informational conference call with automakers about the new testing requirements, but Lee says engineers left with more questions than answers. Details were scarce.

EPA officials would not provide the brand of PEMS testing device they will use, the kind of driving loop to be employed or whether the same driving loop would be applied to all automakers. “I don’t know if it’s under development or if it’s under cloak,” he says. “But at this point, we really don’t know anything about how they will be testing.”

Until now, FCA did not employ PEMS testing. “Why? Because it’s expensive, but that’s not the real reason. It adds hundreds of pounds to the car,” Lee says. “When you test on the road, it’s highly variable because of temperatures and driving conditions. The driver style has no way of being maintained. If you do it in mid-winter or mid-summer, you get different data.”

Members of Congress publicly skewered EPA officials upon learning the International Council on Clean Transportation, working with West Virginia University, discovered the discrepancy in VW diesel emissions, and not the EPA. The accelerated level of testing now under way is intended to show Washington that the agency is on guard, Lee says.

“You’ve got to expect the agency will push, and they will find something somewhere to show that they pushed,” he says.

The lack of a “rigorous methodology” for checking emissions, whether in Europe or at a company such as VW, is an invitation for trouble, Lee says.

“Over time, any system that doesn’t have a re-zeroing somewhere will drift. And I think it shifted in a direction of improving image and improving positioning for sales,” he says. “It didn’t drift in the direction of more stringency. And I’m not just talking about VW. I’m talking about the system.”