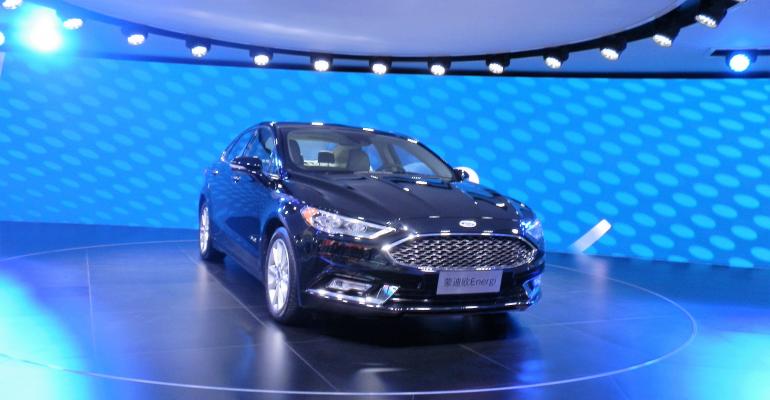 It isn&rsquo;t clear exactly what the market wants, and what the government policies related to EV production will be. That is forcing automakers to adopt somewhat unfocused future-product plans.&nbsp;&nbsp;

SHANGHAI – China wants electric cars to account for a significant portion of the vehicles sold in the country in the future, and it wants automakers to produce them in growing numbers. That much is clear.

What isn’t as clear is exactly what the market wants, and what the policies related to EV production will be. That is forcing automakers to adopt somewhat unfocused future-product plans.

Take Ford, for example.  It plans to eventually offer electrified versions of every model produced at Changan Ford, its joint venture with Chongqing Changan Automobile.

Seventy percent of the JV’s models will be electrified by 2025, says Trevor Worthington, vice president-product development at Ford Asia Pacific.

The “vast majority” will meet the Chinese government’s definition of an electric vehicle, he says.  “In order to compete in the world’s largest market, you have to be there with the right product at the right time.”

The problem can be knowing just what the right product will be. For example, “I don’t know that anyone understands the Chinese customer (battery-) range demands,” Worthington says.

Ford announced in April the JV would begin producing a plug-in hybrid vehicle, the Mondeo Energi, in 2018. It also will bring to market within five years an all-new, fully electric SUV with a stated range of more than 450 miles (725 km).

Then there is the issue of shifting government policies.

Sales of battery-electric vehicles in China rose 9.7% in the first four months of 2017 to 72,895 units. Plug-in hybrid-electric sales fell 27.4% to 17,507 vehicles, according to the Chinese Association of Automobile Manufacturers.

Hefty government subsidies underpin much of that demand. Chinese drivers haven’t shown any real passion for electric vehicles unless accompanied by cash.

But in January, the government announced it will phase out those subsidies. They are expected to be eliminated by 2021.  At the same time, Beijing still says it wants EVs to account for 20% of car production and sales in 2025.

In place of the purchase subsidies, China’s central government is planning a carbon-credits program similar to California’s Zero-Emission-Vehicle program.

China is switching from using a carrot to using a stick to promote EV sales, says Jason Forcier, CEO of battery maker A123 Systems.

“It is going to shift the burden (for creating demand) to the manufacturers,” he tells WardsAuto,

adding automakers likely will be forced to produce EVs at a loss to meet the government requirements.

“But you essentially go from a system where there are government subsidies to a system where OEMs cross-subsidize each other via the credits system,” he says.

However, Worthington says, government mandates “are in flux. You don’t always know what is going to happen.”

Forcier says: “It wouldn’t be shocking to me if we get to the end of this year and this policy gets updated. It happens in China a lot, and it happens rapidly.”

Indeed, exactly what form China’s ZEV mandate will take is as yet unknown. Two government offices, the National Development and Reform Commission and the Ministry of Industry and Information Technology, each have published their own version.

In a November 2016 report, Bernstein, quoting Winston Churchill’s description of the Soviet Union, calls it “a riddle, wrapped in a mystery, inside an enigma.”

The industry consensus now, says Zhu, is that the EV credits target will be delayed either by a significant phase-in period or lower 2018-2019 quotas. For automakers, he says, “It is a source of frustration.”