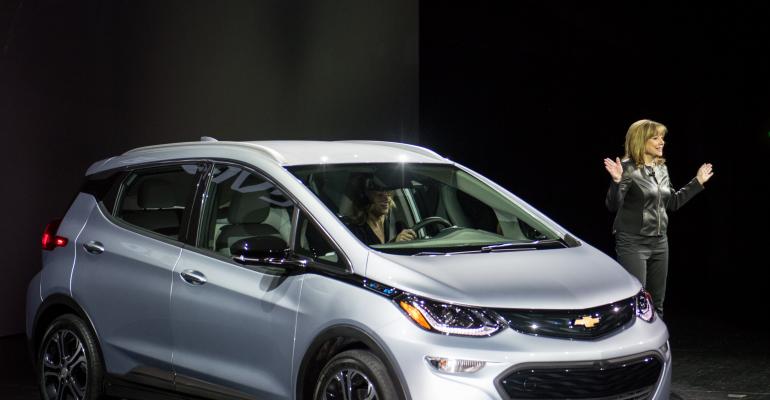 The Bolt also soon could see duty in ride-sharing, another alternative and predominately urban mobility segment where GM recently has dipped its beak.

LAS VEGAS – General Motors executives say the ’17 Chevrolet Bolt, a battery-electric CUV unveiled here on the heels of a string of related investments and partnerships, will go a long way toward urbanizing the automaker’s business – just don’t call it an urban vehicle.

“Where we can build and grow is in the urban areas,” GM Chairman and CEO Mary Barra tells WardsAuto after introducing a production version of the car during a keynote address at CES. “We see this as a huge opportunity, with vehicles like this and the (Lyft) partnership.”

GM President Dan Ammann notes in the Lyft announcement that most of GM’s profits come from suburban and rural areas, not the urban zones that will dominate future population growth. Barra also says industry-watchers should not scratch their heads over GM partnering with a ride-hailing service that someday could affect the automaker’s sales by persuading people to rent rather than buy.

“The segments where we are strongest are probably the last that would be affected,” she says of GM, which banks most of its earnings off trucks and not the small and midsize cars upstart ride services generally use.

Other elements of the deal see GM becoming the preferred supplier of vehicles to Lyft and immediately starting work on rental hubs for drivers of the ride-hailing service needing cars, as well as someday organizing rental hubs for autonomous vehicles.

The Bolt also could soon see duty in ride-sharing, another alternative and predominately urban mobility segment where GM recently has dipped its beak.

The car is built off an EV-specific platform instead of cobbled out of an existing vehicle architecture like most other battery-powered vehicles, so it has the roominess and functionality ride-sharers want. It’s a highly connected vehicle, too, so ride-sharers potentially could locate and rent one over their smartphones, and it has a confidence-inspiring 200-mile (322-km) range.

But to characterize the car as an urban vehicle sells it short, GM Executive Vice President Mark Reuss says.

“There was always an excuse not to buy an electric vehicle. A lot of it was (that) it has to be a secondary-use vehicle, so maybe it is an urban vehicle,” says Reuss, GM’s global product development chief. “This takes that excuse away with the range that we are talking about. You can have this as your primary vehicle. Many people can have this as their primary vehicle.

“It is very much a paradigm shift for how people think about electric vehicles,” he says.

GM plans to begin production of the Bolt at its Orion Twp., MI, assembly plant later this year. It will be available for sale at dealers across the U.S.

The Bolt is expected to be among the leading cars in GM’s portfolio to leverage mapping technology from MobilEye, another budding mobility company with the automaker’s backing.

Using cameras on existing and future GM vehicles, MobilEye will cull highly precise mapping data and send the information back to the automaker to update navigation systems to accuracy within 4 ins. (10 cm), a capability expected to help pave the way for autonomous driving. With 7 million vehicles on U.S. roadways, GM thinks it could be a data-harvesting giant.

Alicia Boler-Davis, senior vice president-global quality and customer experience at GM, tamps down suspicions the automaker would use data collected from its vehicle owners for anything other than improving its products and their ownership.

She notes GM will not pull data without an owner’s consent. It is used in aggregate form so owners cannot be singled out, and the automaker does not share the data with other new connectivity partners such as Google and Apple.

“We use (the data) to make the car better and make the experience better for our customers,” she says.