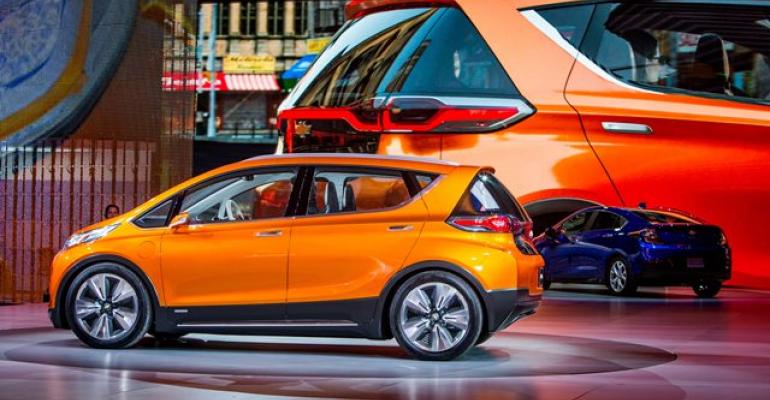 A sale is a sale, but automakers historically dislike it when one product in the portfolio cannibalizes demand from another, because it can erode profit margins and frustrate marketers and production planners.

Nine months into its launch, the all-new Chevrolet Bolt has enjoyed increasing, if not still relatively modest, U.S. sales. It also has been outfitted with autonomous technology to lead self-driving development and deployment at General Motors, made a name for itself as a weekend racer and, just a few weeks ago, became available to Costco warehouse members.

Talk about hitting it big.

But in that time, the longest-range electric vehicle on the market also has been stealing sales away from its plug-in hybrid predecessor, the Chevy Volt.

“That is the story,” says Buzz Smith, a sales professional and self-confessed EVangelist at Classic Chevrolet in Grapevine, TX, a newly trendy city within the 7.1 million-resident Dallas-Fort Worth Metroplex.

Smith estimates his dealership’s Volt sales have tumbled 60% since the Bolt hit the market 10 months ago.

A sale is a sale, but automakers historically dislike it when one product in the portfolio cannibalizes demand from another. When a buyer trades down from a more expensive model, it erodes profit margins, and cannibalization also can frustrate marketers and production planners by causing unplanned adjustments to go-to-market plans and output schedules.

According to WardsAuto data, the Bolt has sold 6,710 copies in the past three months compared with 4,416 deliveries of the Volt. The Bolt also leads in calendar-year sales with 18,552 units, vs. 15,348 for the Volt.

Inventories further reflect the Bolt’s momentum. Dealer stocks of the Bolt closed September with 5,313 units, or a 52 days’ supply. Volt inventories stood at 5,694, or a 102 days’ supply.

The single shift at GM’s Orion Twp., MI, assembly plant, which builds the Bolt CUV and Chevy Sonic gasoline compact car, has seen marginal overtime recently. The automaker’s Detroit-Hamtramck assembly plant building the Volt sedan has been idled for the remainder of the year, although it also makes the Chevy Impala, Chevy Malibu and Buick LaCrosse sedans suffering badly from waning demand due to a prevailing consumer preference for trucks and utility vehicles.

Smith, who worked, ironically, in the oil and gas industry and, more recently, for Apple before taking on the lead EV sales position at Classic Chevy, thinks the Bolt benefits from being the new kid on the block. But a lot of his Volt owners recently have jumped to the Bolt because it is a better fit for their lifestyles and values, he says.

“Some of them even timed the expiration of their Volt lease to coincide with the Bolt launch,” Smith says.

The Bolt is a pure EV, which travels an EPA-estimated 238 miles (383 km) before it needs recharging, while the Volt is an extended-range EV with an all-electric range of 53 miles (85 km) before a gasoline engine takes over for a full range of 420 miles (676 km). After that, the Volt must either go on a charger or have its fuel tank refilled.

But in a number of markets, incentives have been introduced on the Bolt, further drawing down its price. The spiffs helped push Chadwick Wyler, a San Francisco land acquisition professional, into a Bolt instead of a Volt.

“I originally wanted a Volt, but the incentives made the Bolt more competitive,” he says.

Wyler’s main motivation, however, was reducing his carbon footprint and improving his fuel efficiency as much as possible. He recently added a Chrysler Pacifica plug-in hybrid to his household, which convinced him he could not live without electrification in his next car. Those factors made the Bolt a smarter choice for him, he says, despite traveling as much as 200 miles (322 km) daily for work.

“After doing the research, I challenged myself,” he says. “There have been 100-mile-range (160-km) EVs on the market for a few years and those people were doing fine. I wanted to be an early adopter, too.”

Lucy Cooley, an arts professional in Cleveland, owns a ’12 Volt and had thoughts of buying a second-generation model until she learned of the Bolt.

“Once the Bolt became available, it was no more thoughts of Volt Gen 2,” she says. “(We) tried so hard not to burn gas in the Volt – almost obsessive about it.

“The new obsession is one-pedal diving,” she says, referring to how EVs can use their electric motors to brake the car. It’s especially helpful in bumper-to-bumper traffic, where the driver does not have to switch back and forth between the accelerator and brake pedals. It saves battery juice, too.

Cooley, who fondly recalls GM’s first EV, the EV1, from her years living in California, bought her Bolt May 31. She drove three hours to do it, too, because the car was not available in Ohio until September. But her garage still has its Volt.

“We love it and the resale value seemed too low,” she says.

GM spokesman Jim Cain says the automaker sees some interaction between the cars, although it occurs mostly among green-leaning buyers rather than hardcore environmentalists.

“There are customers for pure-electric vehicles who would not consider anything with a tailpipe,” he says.

Consumer demand for the Volt also is linked more closely to fuel prices, Cain adds, and the car is more susceptible to the market’s swing away from passenger cars to trucks and crossovers.

Bolt sales also enjoy a modest tailwind owed to the Volt. The Volt has been in Chevy showrooms since 2011, when it and the Nissan Leaf EV introduced the mass market to battery propulsion.

GM executives admitted the Volt’s biggest hurdle for many of its seven years on the market was an inability by the automaker and its dealers to effectively convey how the technology worked. For good reason, consumers simply could get not get their head around an EV with an internal-combustion engine. It also became a political football shortly after launching. Critics nicknamed the Volt the Obamacar, because it arrived on the heels of GM’s government-backed bankruptcy.

The Bolt launched into a much different market, with startup automaker Tesla making high-tech EVs look sexy. Perhaps more importantly, Chevy dealers now have under their belts nearly a decade of pitching electrification.

But dealers still must be committed to the technology, says Steve Majoros, director-marketing, cars and crossovers at GM.

“We have some dealers that are phenomenal at it and some that are OK,” says Majoros, who adds that the expertise of individual Chevy dealers often is dictated by their market. Some are more knowledgeable about Silverado heavy-duty diesel pickups, for example, and others about traditional passenger cars.

“What does it take to move a dealer from OK to phenomenal? It takes a lot,” he says, pointing out Classic Chevy as one dealer that invested a great deal in electrification expertise.

The dealer has a dedicated showroom to the Bolt and Volt. It’s called Electric Avenue and Smith helped with the design, which relies heavily on video and resembles an Apple store. It’s a standout for Chevy among its EV sellers despite its location in the heart of truck country.

“Texas is a lot like everywhere else,” Smith says. “Yeah, 60% of sales are trucks but we still sell a lot of cars and crossovers, and people are always coming in looking for better fuel economy.”

Smith admits it is easier to sell the straight forward proposition of the fully electric Bolt over the mixed-propulsion Volt, but whichever car fits a customer’s needs he is always sure to demonstrate the fun-to-drive aspect of electric power.

“Fun and fuel economy are no longer exclusive,” he says. “I had a customer come in recently looking for better fuel economy but said she also autocrosses. I pointed her to the Bolt.

“And once you plant a seed with that first plug-in, their next car will be a plug-in, too.”

As for Bolt sales steaming ahead of Volt, Smith thinks the tide soon will turn again in the Volt’s favor.

“The Volt will rebound,” he says. “It is still a much more logical choice for people who travel.”