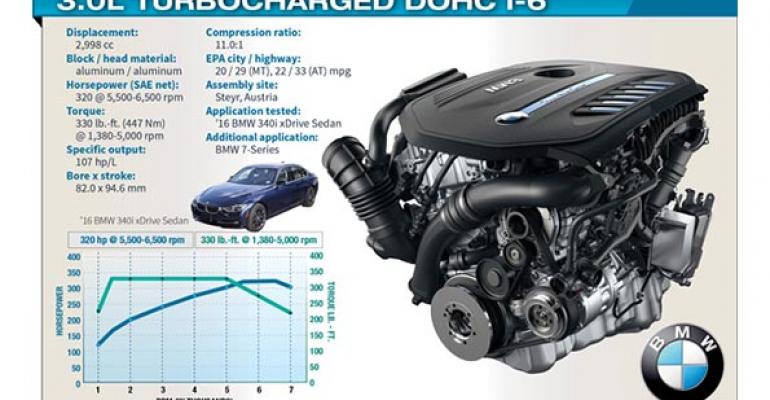 BMW’s Near-Perfect I-6 Gets Even Better

Why not go to an easier-to-package V-6 like everyone else? BMW&rsquo;s head of inline gasoline engines reminds us the I-6 not only is inherently smoother, but it also is significantly lighter.

WardsAuto’s 10 Best Engines competition has recognized outstanding powertrains for 22 years. This installment of the 2016 “Story Behind the 10 Best Engines” series looks at the development of the latest-generation of BMW’s iconic inline 6-cyl. engine.

In the 22 years WardsAuto has been testing, analyzing and honoring the industry’s best engines and propulsion systems, BMW has earned no fewer than 32 Wards 10 Best Engines awards, all but six scored by the German automaker’s legendary smooth and powerful inline 6-cyl. engines.

The previous-generation N55 3.0L TwinPower turbocharged I-6, still performing admirably in a variety of  ’16 BMW cars and CUVs, took home three successive trophies in 2011, 2012 and 2013. And now this measurably better same-displacement B58 3.0L TwinPower turbocharged I-6, the core member of a new BMW EfficientDynamics modular engine family, earned its first trophy in 2016. Offered first in BMW’s bread-and-butter 340i sedans and sport wagons, it now is available in the ’16 M240i, 440i and 740i models, as well.

Like the N55, this new all-aluminum B58 features direct fuel injection, a twin-scroll turbocharger, Double-VANOS variable camshaft timing and Valvetronic fully variable valve lift. But the B58’s block and head are redesigned with a 0.19-ins. (5-mm) longer stroke, a 0.08-ins. (2-mm) smaller bore diameter and a higher 11.0:1 compression ratio, and the turbocharger’s turbine and compressor wheels are larger by 6% and 10%, respectively. Also redesigned are the valvegear and the Valvetronic system and its servomotor, while a new water-to-air intercooler is integrated into the intake plenum and a new engine-mounted encapsulation system helps retain heat for easier restart, quicker warmup and lower emissions.

Beyond its higher output and more efficient operation, the B58 also improves on the N55’s already noteworthy quietness.

“The inline 6-cylinder is one of our most famous engines,” says Markus Rülicke, BMW’s head of design for inline gasoline engines. “And one of its outstanding features is its NVH. This is a big advantage of the inline configuration, and we improved that advantage even further. If you drive through the whole rpm range, it revs up quite easily and is really outstanding from the NVH point of view.”

These improvements were achieved by setting up a completely new engine family with the cylinders in the optimal size of 0.5L, improved thermodynamics and the addition of an integrated charge-air cooler to get more performance, Rülicke says.

“We brought in a new (Bosch Mahle Turbo Systems) turbocharger to get better response and power output. For NVH, we revised the crankshaft and redesigned the crankcase, making it stiffer and reducing its weight. Those are the two main features that improve NVH at higher rpms,” he says.

Also among the primary objectives was quicker response. “We wanted to stay with a very wide rpm range up to a maximum of 7,000 rpm,” he says.

The fuel-economy target was more than a 6% improvement over the N55 in comparable vehicles, and that was accomplished with help from some vehicle-level improvements. “We achieved all of the targets we set for ourselves,” Rülicke says, “including all legal requirements in terms of emissions worldwide.” And he emphasizes the fuel-efficiency improvement is not just in test cycles but also in real-world customer usage.

The most difficult challenges in developing the new engine were the trade-offs in terms of low fuel consumption and more performance, he says.

“But we managed to do this (and also managed to) increase performance and lower weight. Some might say you can’t do that because with more performance, the engine loads are higher and the weight will have to go up, but we managed with lightweight design to reach both targets. The new design and further development of our full-aluminum crankcase helped us very much, and also the new turbocharger and integration of the charge-air cooler into the intake manifold.”

As an all-new member of a completely new modular “B” engine family, the B58 six shares more than 40% of its parts (such as pistons, rods and valvegear) with its 3- and 4-cyl. siblings. And with the recent replacement of Volvo’s venerable I-6 by a supercharged and turbocharged “Drive-E” I-4, it also is the last remaining I-6 available in a U.S.-market car.

Why not go to an easier-to-package V-6 like everyone else? Rülicke reminds us the I-6 not only is inherently smoother, it also is significantly lighter.

Because engineers never are completely satisfied, we ask whether there may be room for still more improvement as CAFE targets climb relentlessly.

“You are right that as an engineer, at the end of development, you always have good ideas of what maybe could make better,” he says. “Of course we are thinking every day about what we can improve and how to improve it – even small improvements – for a next-generation, because the legislative boundaries will be set even harder in the future. But for the time being, I think we have made quite a perfect engine. I think it is really the best 6-cylinder you can buy.”