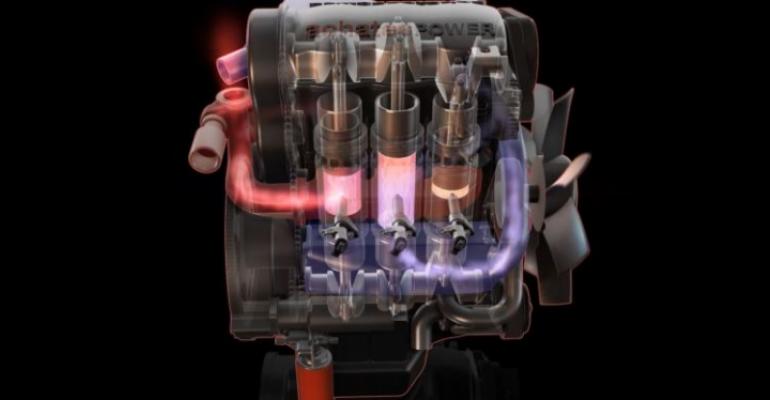 Inexpensive to manufacture, compatible with all fuels, cleaner burning and up to 50% more fuel efficient, the opposed-piston engine is finding traction with manufacturers, Achates says. The first demonstration vehicle will be ready for driving next year.

DETROIT – A modern incarnation of the 2-stroke opposed-piston engine is inching toward production for light vehicles as its key proponent, Achates Power of San Diego, claims nine customers have hired the company to develop, build and test engines, some of them for light vehicles.

In addition, Achates President and CEO David Johnson says some engine manufacturers are retooling plants in certain parts of the world to produce Achates’ opposed-piston engines or are investing in this conversion. Existing engine factories need only modest retooling, he says.

With onerous fuel-economy regulations bearing down, internal-combustion engines must consume significantly less fuel than they do today in order to comply.

Executives at Achates (pronounced a-KAY-tees) are convinced their engines, which require two crankshafts and place two pistons in each cylinder, are up to 50% more efficient than current downsized turbocharged gasoline engines and 30% more efficient than next-generation light-duty diesels.

“We are in a deep phase of commercialization of our technology and have demonstrated on our dynamometers in San Diego that our engines are the cleanest and most efficient engines in the world and therefore are highly relevant,” Johnson tells journalists in a meeting here during the North American International Auto Show.

“It’s the technology that has driven customers to our doors,” he says, noting that each automaker is in the process of eliminating its dirtiest engine. “They replace it with their best engine – kind of a leapfrog game. When they do that new one, it will be an OP engine.”

Four major automakers, in response to questions from WardsAuto, say they are intrigued by the Achates technology but not working on opposed-piston engines or with the company.

Johnson cannot identify the nine customers, but there are three additional contracts for military programs, including a $14 million deal with Cummins to develop engines for advanced combat vehicles. The U.S. Army has been a customer for five years. Revenues from military programs have reached $25 million.

Engine producer Fairbanks Morse of Beloit, WI, now is using Achates technology to update its opposed-piston engines used in power generation, marine, military and other applications. “We’ve helped them achieve the next level of emissions (reduction),” Johnson says. “They are taking our technology into production now.”

The U.S. Dept. of Energy’s ARPA-E research arm has awarded a $9 million grant to Achates, Delphi and Argonne National Laboratory to develop an opposed-piston gasoline compression-ignition engine suitable for high-volume production and to be used in fullsize trucks and SUVs popular in the U.S.

That research program eventually will result in a 2-stroke 3-cyl. (6-piston) gasoline engine being installed in a demonstration vehicle in the future.

But sooner, early next year, customers will be able to drive the first diesel demo vehicle, which will meet CAFE 2025, Tier 3, LEV III and Euro 6 emissions requirements, Johnson says. Images of a debadged Ford F-150 and Chevrolet Suburban on an Achates Powerpoint presentation suggest the target market.

“The reason we went after those vehicles and targeted this product is they have the greatest need for fuel efficiency improvement, and they sell in tremendous volumes in this country,” Johnson says.

Lop off one cylinder and a smaller 4-piston variant “would be lovely for passenger cars,” he says. “We have studies going on along those lines now.” Bore sizes can be as narrow as 70 mm, resulting in displacements as small as 0.6L per cylinder.

Having worked previously for Navistar, General Motors and Ford, Johnson joined the privately held Achates in 2008. Today, he can barely contain his excitement that this revolutionary technology he has been promoting for years is now so close to production.

“There’s a tremendous amount of spending going on in our industry globally for engine development. Some of those dollars are flowing to Achates Power, and I can guarantee you those numbers will keep growing because of what we offer,” Johnson says.

“Basically, OEMs that make engines today will make these engines in the future. I know that because of the work we’re doing with them today. Engines we are working on today go from 50 hp to 5,000 hp,” for everything from weed wackers to battleships.

In his nine years at the company, Achates has grown from 30 employees to nearly 100 and from one building to four, including a facility nearby in Farmington Hills, MI. Achates was founded in 2004. Revenues more than doubled from 2015 to 2016.

His enthusiasm is understandable: Achates’ OP engine can be tuned to run on any existing fuel, although Johnson says zero customers are asking for an engine that runs on hydrogen. The radiator can be smaller because the engine rejects less heat to the coolant, and transmissions can have fewer speeds because they won’t have to shift so often for optimum efficiency.

The OP engine has no cylinder head or valvetrain and uses many components already produced, such as pistons, connecting rods and crankshafts. The two crankshafts are geared together.

Fuel is sprayed perpendicular to the cylinder, between the two moving pistons. Because the fuel doesn’t impinge on the combustion-chamber wall, the engine produces very little soot compared with 4-stroke engines.

The engine needs both a turbocharger and supercharger for adequate breathing, but Johnson pegs overall cost savings at $1,500 or more – about 20% less expensive than manufacturing a comparable 4-stroke engine. The cost of aftertreatment is reduced 30% because fewer precious metals are necessary and catalytic converters can be smaller.

A diesel Achates OP engine also would need selective catalytic reduction to scrub oxides of nitrogen emissions, but the SCR tank can be smaller. Johnson isn’t saying whether SCR would be needed for a gasoline version. “There’s work being done now at Argonne on that subject,” he says.

Noise and vibration characteristics are not a problem because the OP engine is fully balanced with one, two or three cylinders, as opposed to the “paint shaker” sensation Johnson attaches to 4-stroke engines with the same number of cylinders.

Johnson says the “plug-and-play” nature of the Achates engine allows it to fit in existing engine bays, and that it is compatible with all current transmissions, stop/start, 48V electrical systems, hybridization and all duty cycles currently required of 4-stroke engines, including towing.

The company has 135 patents (and 178 pending) for the engine, and many are associated with the integration of existing technologies such as common-rail fuel injection, forced induction, charge-air cooling, exhaust-gas recirculation cooling and closed-loop combustion feedback.

Despite breathless enthusiasm internally, at least one major automaker, Hyundai, says it is not working with Achates, although they met three years ago.

“Their concept is interesting,” says John Juriga, Hyundai’s North American powertrain director. “However, with a 2-stroke engine design, we still have concerns with emissions capability and durability. This technology could be very beneficial in several applications, so it is worth watching.”

Another automaker says it is concerned about weight and emissions associated with the Achates concept.

An FCA US LLC spokesperson says a number of companies are working on similar designs, and that fundamental thermodynamic benefits for opposed-piston architectures include higher indicated efficiency than in conventional engines. But FCA US says OP designs “do not feature in our engine plans,” citing a number of technical challenges that need to be addressed before going mainstream.

Battery-electric vehicles would appear to pose a threat to Achates, but Johnson is convinced Americans will continue to want internal-combustion engines for long-distance driving and that hybrids will continue carrying a cost premium.

“Toyota has been successful with the hybrid Prius. But we say, if you want to make a better Prius, you’d better give it a better engine. That’s what we can do to help Prius,” he says.

Plus, electrified vehicles are a financial drain on automakers. “That’s a problem. If the Prius was the solution, then everything would already be hybridized. Toyota has been the leader in that for years, and they still basically have one plant making Prius because they can’t make money on it. We think this changes things quite dramatically.”

Johnson says the key remaining question is: Which customer will be first to market with an Achates OP engine in a light-duty vehicle?

“There was a day when I used to come to work and say, ‘I wonder if anybody will ever do this?’” he says. “That day is long since past.”