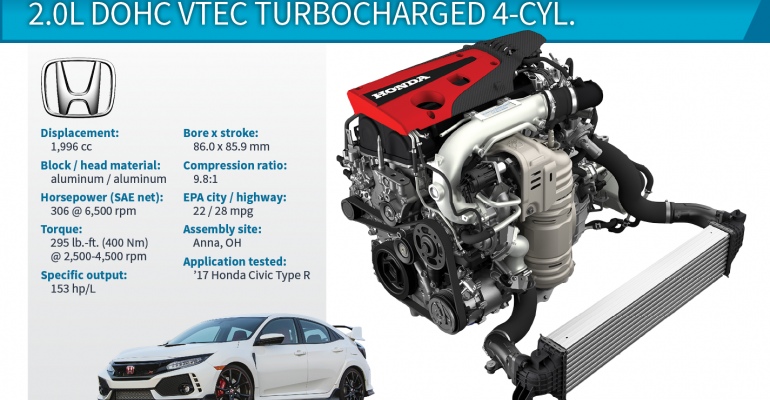 High-rpm flogging is not required but makes for storming good fun as the 2.0L turbo 4-cyl. pounds out 306 hp before reaching the 7,000-rpm redline. With a specific output of 153 hp/L, this VTEC engine is the most powerful street-legal Honda ever to reach America.

Some years ago, Honda was preparing to launch its 10th-generation Civic compact car, and top management decided the automaker’s new global Civic platform would be used for every 2-door, 4-door and 5-door body style in every part of the world.

That meant the high-output Civic Type R hatchback, five generations of which had been titillating enthusiasts in other parts of the world since 1997, could finally make its way to American shores.

Honda has made some stupendous and sporty 4-cyl. engines dating back 30 years, but all those powerplants were naturally aspirated, which required steady caning at high rpm to wring out their full potential.

High-rpm flogging is not required but makes for storming good fun as the 2.0L turbo 4-cyl. pounds out 306 hp before reaching the 7,000-rpm redline. With a specific output of 153 hp/L, this VTEC engine is the most powerful street-legal Honda ever to reach America.

Even when pushed hard, this all-aluminum 4-pot assembled in Anna, OH, responds without excessive buzzing or vibration. At lower rpms, the engine is sedate, seemingly intent on being a capable daily driver. A unique three-way exhaust system makes for subdued tones, until engine speeds rise.

On earlier naturally aspirated Honda engines, VTEC provided additional valve lift by switching to a different cam lobe at high rpm. The execution is slightly different in the new turbocharged engine, which deploys VTEC only on the exhaust valves. Instead of doing its job at high rpm, the updated system operates at lower engine speeds, opening the exhaust valves wider to dump more exhaust into the turbocharger to spool it up more quickly.

Judges were effusive in their praise of the Type R engine.

“Insanely enjoyable, especially with the revs up in what used to be VTEC-activation range,” writes editor Bob Gritzinger on his scoresheet. “This is Honda engineers tossing a chunk of a racing engine into a street car. It rips the tires loose in third gear!”

This engine is loaded with innovation, from the electric wastegate to help the turbo spin faster and oil jets to cool the pistons to the lightweight forged steel connecting rods to help reduce rotating inertia and the lightweight single-mass flywheel that spins up faster than the heavier dual-mass flywheel used previously. Premium fuel is recommended.

There’s only one transmission available in the Type R – a short-throw 6-speed manual – and it employs standard rev-matching, which permits the driver to, say, downshift without drama into third at 80 mph (129 km/h) while on the highway. Still, this engine is cool and confident.

Remember, the Civic is front-wheel drive, so it’s most impressive how little torque steer factors into just about any driving situation, thanks to active dampers and a slick dual-axis strut front suspension design.

This engine truly is one of a kind, although a sibling at a lower state of tune (252 hp) appears now in the all-new Honda Accord sedan, with lower boost pressure, different connecting rods and a different turbocharger.

That 2.0L 4-cyl. also was very much in the hunt for a 2018 Wards 10 Best Engines trophy, but our judges were intent on honoring the Civic Type R.

With a base price of $33,900, the Civic Type R was among the least-expensive vehicles making this year’s list.