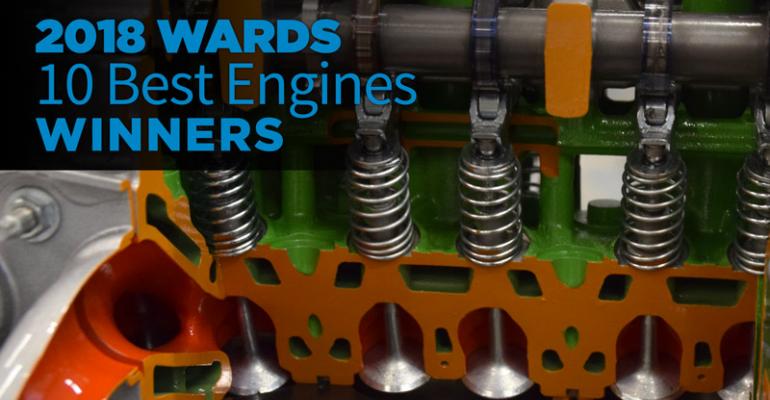 This year’s list sees the return of the fuel cell, as well as the V-8. Jaguar and Kia win their first trophies. Half the winners are turbocharged. Toyota wins for a hybrid that’s not a Prius.

Ford and Honda each earn two Wards 10 Best Engines trophies for 2018, while Jaguar and Kia land on the list for the first time in a year that sees mainstream brands dominating the winners’ circle.

Other notable trends this year: No German automakers are among the winners, and the only luxury brands represented are Infiniti and Jaguar. Also, four electrified powertrains are honored for the first time in a single year.

“And we certainly didn’t set out to find four electrified drivetrains to honor this year,” he says. “These four belong on our list because they are extremely efficient while at the same time fun to drive.”

The all-electric Chevrolet Bolt was not available for Wards 10 Best Engines testing a year ago, but it was worth the wait to run the zero-emission compact car through our real-world gauntlet this past fall.

We now know the Bolt, available in dealerships in all 50 states, is an affordable, world-changing vehicle that delivers on the promise of electric mobility for the masses. It is quick and smartly designed, and its official range of a groundbreaking 238 miles (383 km) makes it attractive to a much wider audience, particularly those who want to do right by the environment.

Torque is more than abundant, delivering thrilling acceleration and answering our guiding question for every 10 Best Engines nominee we evaluate: Does the powertrain sell the vehicle?

That statement also rings true for the Chrysler Pacifica Hybrid, one of only two returning winners this year. It’s a big, seven-passenger plug-in hybrid minivan with all the bells and whistles families have come to adore, but with 33 miles (53 km) of full-electric range and levels of fuel efficiency unimaginable just a few short years ago.

By keeping the Pacifica Hybrid charged as much as possible during testing, we were able to post nearly 35 mpg (6.7 L/100 km) on the trip odometer in mixed daily driving that usually exceeded battery range.

With most owners using their minivans to run errands and occasionally take a long-distance drive, we find the Chrysler Pacifica Hybrid to be a stroke of genius.

It’s been five years since an engine in a gasoline-powered pickup truck has landed on the Wards 10 Best Engines list. Cars seem to have the upper hand in our competition because they’re lighter, quicker off the line and more fuel-efficient.

This year was different. Ford loaned us the redesigned 325-hp twin-turbo 2.7L EcoBoost V-6 in the F-150, and our staff was blown away by its vibration-free idle, its nearly imperceptible stop/start system and especially its tomb-like silence. We’ve been in luxury cars that aren’t this quiet.

Judging by its relatively small displacement, one might assume this engine, using both direct and port fuel injection, is merely an adequate offering within the F-150 lineup. Not true. It will snap your head back if you stomp on the gas at just about any speed. No wonder the 2.7L is now the most popular engine in America’s most popular pickup truck.

Ford’s second award is for the redesigned 5.0L V-8 in the Mustang GT. This engine shares some of its voodoo with the Shelby GT350’s 5.2L V-8 that made our list two years ago, such as lightweight spray-in cylinder liners.

Paired to an all-new 10-speed automatic transmission, this muscle car is shockingly efficient as some of our editors routinely topped 24 mpg (9.8 L/100 km) despite our heavy-pedal testing. If saving the planet isn’t your thing, then feel free to launch the Mustang GT from a standstill at wide-open throttle. It’ll reach 60 mph (97 km/h) in less than 4 seconds.

The next award alphabetically comes from a different space, without internal combustion but equally deserving for its advanced technology: the 174-hp Honda Clarity fuel-cell vehicle.

Running on hydrogen, this comfortable five-seat all-electric car can drive 366 miles (589 km) without stopping, the longest range of any zero-emissions vehicle, while reaching a top speed of 103 mph (166 km/h).

Coupled with Acura-level driving dynamics and delightfully silent operation, this car is ready for prime time despite all the insanely complex things going on under the hood and floor. We even chirped the tires in sport mode.

The fueling infrastructure is limited to the coasts, but it’s growing. And Honda has a great lease deal: $369 a month, a $15,000 fuel allowance, $5,000 California rebate and 21 days a year to swap for a luxury car. The Space Age is here.

Honda’s second Wards 10 Best Engines trophy is something altogether different, and yet familiar for an automaker with a long legacy of high-output 4-cyl. engines.

Its new 2.0L VTEC turbocharged 4-cyl. makes 306 hp in the riotous and lightweight Civic Type R – the most powerful Honda ever to reach the U.S. It represents Honda’s 18th trophy for 10 Best Engines but the first with forced induction.

A close derivative of this same engine appears in the all-new mass-market Honda Accord, with 252 hp. It damn near made the list this year as well.

With the growth of turbocharged 4-cyl. engines, the future of high-feature V-6s had come into question. But the 3.0L twin-turbo VR V-6 in the Infiniti Q50 sedan and Q60 coupe confirms these silky smooth powerplants will be around for years to come.

At 400 hp and 350 lb.-ft. (475 Nm) of torque, this returning winner is a delight for driving enthusiasts, sprinting to 60 mph in less than five seconds. It never seems at a loss for extra punch at highway speeds, and its responsive throttle brings out the mischievous child in WardsAuto judges.

But it’s a sophisticated brute, too, with electrically variable-valve timing and a weight-saving exhaust manifold design within the cylinder heads. Turbo lag is a veritable no-show.

Meanwhile, fuel economy surpasses 23 mpg (10.2 L/100 km) during testing, which is quite a feat for an engine that begs to run freely. The VR 3.0L is only getting better with age.

Spend some time behind the wheel of the Jaguar XF sedan, and you’ll understand why the Brits proudly claim this Ingenium 2.0L turbocharged 4-cyl. gasoline engine as their own, developed in-house, independent of any previous ties with Ford.

There are two versions of the Ingenium 2.0L, but we tested the low-output variant, rated at 247 hp and 269 lb.-ft. of torque. Those numbers fall in line with other luxury-leaning turbo-4s, but this new powerplant with a unique electrohydraulic valvetrain ranks with the best of them, cruising confidently and displaying plenty of punch for every situation.

We look forward to testing this engine again next year, along with the high-output version making 296 hp in several Jaguar vehicles.

It’s great to hear Jaguar planning battery-electrics and plug-in hybrids for the future, but it’s equally encouraging to see the brand holding fast to efficient, world-class internal-combustion as well.

Like Jag, Kia enters the winners’ circle for the first time with its 3.3L twin turbo V-6 in the new Stinger sport sedan. This formidable powertrain generates 365 hp and a whiplash-inducing 376 lb.-ft. (510 Nm) of torque, as early as 1,300 rpm, barely above idle speed.

Powertrain engineers at Hyundai Motor, which owns Kia, designed this engine for both the Stinger and Genesis G80 Sport, which is quite a bit heavier but more of a comfortable cruiser.

In the rear-wheel-drive Stinger, the 3.3L V-6 is quiet and smooth at idle but willing to bellow like a big V-8 under hard throttle. “Illegal speed arrives quickly,” one WardsAuto judge writes on his scoresheet.

Hyundai/Kia engineers like to compare the new 3.3L twin-turbo V-6 to BMW’s excellent B58 3.0L inline 6-cyl. – perhaps unfairly because Munich’s mill has less displacement and only one turbo.

But give the Koreans their due: The BMW B58 engine, a winner last year, was eligible in this year’s competition, and yet it’s Kia going home with the hardware.

Toyota wins its 13th Wards 10 Best Engines trophy for a powertrain configuration it hoisted to prominence in the U.S. many years ago: the gasoline/electric hybrid. Yes, the Prius has earned four trophies since 2001, but now for the first time a different type of hybrid is being honored.

The new Toyota Camry Hybrid sailed (literally) onto this year’s list by logging no less than 40 mpg (5.8 L/100 km), despite some aggressive driving in a vehicle considerably larger than a Prius.

Even more spectacular is the way this package works. Toyota has choreographed the interaction between the Camry’s all-new new 2.5L gasoline 4-cyl. and electric motor into an elegant, seamless, high-tech ballet. And thanks to the turbo-like boost from the electrics, the car never seems to run short of passing power.

If you still believe “hybrid” is synonymous with “drudgery,” think again.

Since 1995, the Wards 10 Best Engines competition has recognized outstanding engines and electrified propulsion systems, as well as the technology and engineering behind them. All new or significantly improved powertrains, as well as last year’s 10 returning winners were eligible. Vehicles must have a base price no higher than $63,000.

The winning automakers will be honored Jan. 17 at a WardsAuto ceremony in Detroit during the North American International Auto Show.

Please visit WardsAuto.com in the coming weeks for additional commentaries, profiles of the winning engines, videos and more information about the 2018 Wards 10 Best Engines.