WardsAuto Megadealer 100: Revenues Down, Profits Up in 2020

Total revenues were about $59 million for the average U.S. dealership in 2020, down 4.2% vs. 2019, according to the National Automobile Dealers Assn. But total expenses declined 5.6% on average to $6.6 million. As a result, pretax net profit per dealership increased 48% for the year, to $2.1 million, NADA says.

Dealer groups in the WardsAuto 2021 Megadealer 100 hit the ground running in 2021 on the heels of a banner year in 2020, despite lower revenues and lower unit sales because of the pandemic. 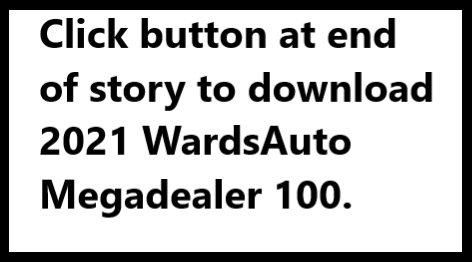 Cost-cutting has offset lower revenues, along with higher per-unit margins driven by high consumer demand and low inventories for both new and used vehicles.

Coronavirus-related business shutdowns originally led to the shortage of new vehicles in 2020, but the shortage continues in 2021 and probably into next year because of the current shortage of computer chips.

Total revenues were about $59 million for the average U.S. dealership in 2020, down 4.2% vs. 2019, according to the National Automobile Dealers Assn. But total expenses declined 5.6% on average to $6.6 million. As a result, pretax net profit per dealership increased 48% for the year, to $2.1 million, NADA says.

Sonic, based in Charlotte, NC, is No.6 in the WardsAuto 2021 Megadealer 100, based on total annual revenue for 2020. However, lower inventories probably are a “new normal” in the new-car department, even after production catches up with demand.

“The manufacturers are seeing the profitability of having a lower days-supply,” Byrd says in a June 18 phone interview. “They make more money. They don’t have to incentivize the vehicle. They learned from COVID. It’s a better way of doing business.”

Dealers have reached the same conclusions. “I would never wish for this pandemic. It's a horrific, horrible thing that we’ve gone through,” Mike Jackson, CEO of AutoNation, says in a conference call in April.

“But if you ever wanted a case study of what the world looks like if you did it different, this past year is this moment, and all of this year will be it. The list of benefits, both at the manufacturer, supplier and retail level, with a little adjustment here and there, is considerable, and it’s long,” he says.

Sonic Automotive is on a campaign to achieve $25 billion in annual revenue by 2025 – more than double its 2020 total of about $9.8 billion, and a number that would have surpassed No.1 AutoNation in the 2021 Megadealer 100. AutoNation, based in Fort Lauderdale, FL, had total annual revenue for 2020 of about $20.4 billion.

Most of the planned growth for Sonic Automotive comes from its used-car-only brand, EchoPark, Byrd says. By 2025, Sonic plans to have 140 EchoPark locations nationwide, up from 24 today, he says.

Of Sonic’s $25 billion goal, $14 billion would come from EchoPark, with the other $11 billion coming from Sonic’s franchised network, Byrd says. Compared with the target for EchoPark, that would be a relatively modest increase. The group’s franchised dealerships accounted for $8.3 billion in 2020 revenues. The additional revenue is to be achieved though both organic growth and acquisitions, Byrd says.

To get there, Lithia says it expects to add $3 billion to $5 billion annually in additional revenues through acquisitions. The other major pieces of the increase come from Lithia’s Driveway online commerce platform, and from organic growth from its existing dealer network.

That rate of growth would make Lithia more than twice AutoNation’s current size. Lithia is No.2 in the WardsAuto 2021 Megadealer 100, up from No.3 a year ago.

Despite the high-profile, large-volume moves among the publicly traded new-car retailers, privately held groups account for the biggest number of mergers and acquisitions, says George Karolis, president of the Presidio Group, a dealer brokerage firm based in Duluth, GA, and San Francisco. The Presidio Group was the Suburban Collection’s adviser in the sale to Lithia.

That should account for plenty of movement in the WardsAuto 2022 Megadealer 100.