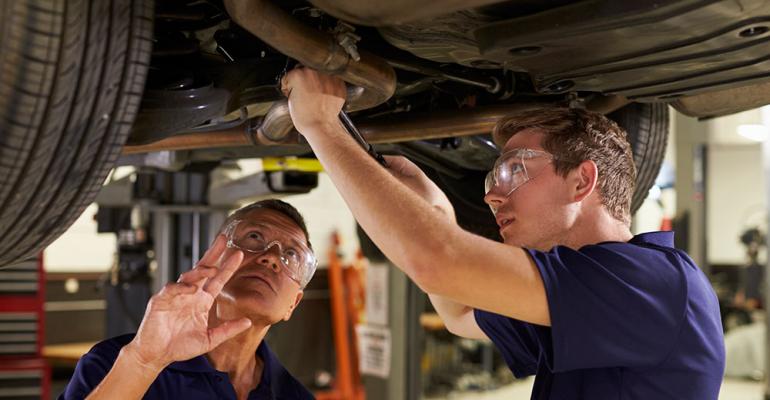 “I haven’t made my living on engine or transmission work on vehicles I’ve sold new in more than a decade, and neither has any other franchised dealer,” Lutz says.
Dealers

It’s wrong to contend selling EVs at the front end will hurt dealers at the back end, says Wes Lutz.

Some electric-vehicle advocates contend dealers don’t like selling those vehicles because it would end up cutting into their service-department profits.

But it’s wrong to contend selling EVs at the front end will hurt dealers at the back end, Wes Lutz, chairman of the National Automobile Dealers Assn. tells an Automotive Press Assn. gathering in Detroit.

“First off, I don’t make money on oil changes,” he says. “And these days, vehicle are going 7,500 miles (12,000 km) between oil changes anyway. Try to make money selling $30 oil changes that cost $40 in goods, labor and overhead. Unfortunately, you can’t make that up in volume.”

As for another part of the claim, “I haven’t made my living on engine or transmission work on vehicles I’ve sold new in more than a decade, and neither has any other franchised dealer,” says Lutz, a Chrysler, Dodge, Jeep and Ram dealer in Jackson, MI.

“And the last time I checked, you know what EVs have?” Lutz says. “Tires, brakes, suspensions, steering systems and electrical systems.”

He also refutes “a theory” that EVs don’t require as much drivetrain maintenance or similar service work compared with internal-combustion vehicles.

“NADA is not aware of a single study or data set out there that can substantiate, even partially, this theory,” Lutz says. “And that’s because there just aren’t enough real-world EV miles out there to study, let alone draw any meaningful conclusions from.”

He adds, “It sort of sounds true. And it’s super interesting. But that’s not good enough. Or at least it shouldn’t be.

“So the next time you hear, or are told, that dealers don’t want to sell EVs because they are going to lose service revenue, I want you to respond, ‘How do you know that? Show me what you’re looking at that proves that?’ Because I want to know as much as anyone.”

Lutz says he wants “to sell anything my customers want to buy, period.”