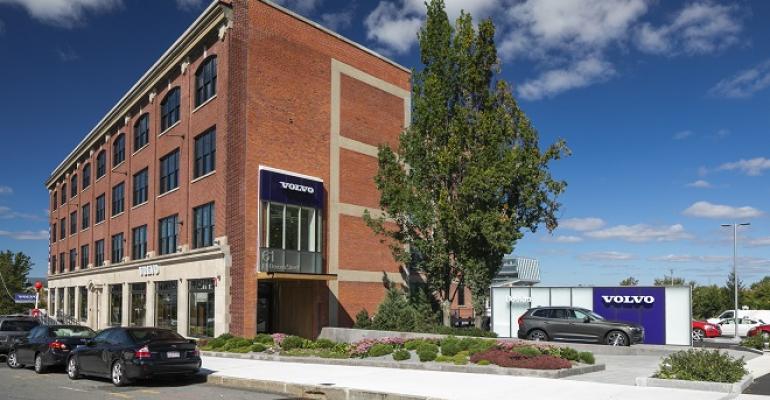 Dealer Ray Ciccolo says the project demonstrates how a long under-utilized but architecturally and historically significant building can be sensitively rehabilitated.
Dealers

It is a state-of-the-art metro Boston dealership occupying a historic building that once housed a defunct International Harvester’s facility.

Boston Volvo Cars, of Ray Ciccolo’s Village Automotive Group, has relocated to the site at 61 North Beacon Street in Allston, adjacent to its previous home.

In an unusual vertical showroom design, the new store utilizes three floors of the building.

A service intake area is on the basement level (accessed through the rear of the building). The main showroom is on the street level with additional showroom space on the second level. (The service department facilities remain at the previous location.)

In the early 20th century, this Allston area was known as Boston’s “Auto Mile” or “Truck Mile” to some people because International Harvester manufactured trucks and other machinery there.

Boston Volvo Cars’ move returns the historic commercial building to its original use as an automobile showroom. The stately brick building was built in 1925 and housed International Harvester and New Balance in the following decades.

“In 1963, our original Volvo showroom was bare-bones and simple,” says Ray Ciccolo, president and founder of Village Automotive Group. “Just as 21st century Volvos have transformed from solid and boxy to sleek and stylish, so has their flagship home in Boston. We wanted to create an interior that combines beautiful Swedish simplicity with unique functionality.”

Ciccolo says the project demonstrates how a long under-utilized, but architecturally and historically significant building can be sensitively rehabilitated.

Village Automotive has implemented green initiatives at many of its dealerships. The new Boston Volvo Cars store is no exception. It has 285 solar panels, seven EV charging stations, high-efficiency windows and sustainable building products.

The renovated building is “in the center of one of Greater Boston’s most up and coming neighborhoods,” says Arrowstreet Principal David Bois.

His firm, the dealership group and Volvo worked closely to address changes in the retail landscape and “to transform Boston Volvo Cars into a smaller footprint that efficiently introduces an innovative showroom concept to the industry in a multipurpose building.”