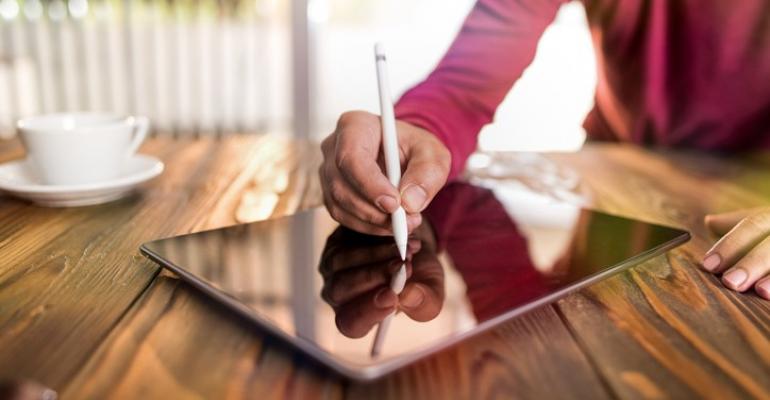 People in auto-retailing and lending sectors had talked about its coming for years. But people talk about flying to Mars, too.

For a while, it looked like car dealership e-contracting was a vision of the future –and always would be.

People in the auto retailing and lending sectors had talked about its coming for years. But people talk about flying to Mars, too. It just wasn’t happening.

Jon Strawsburg, vice president-product planning at Reynolds & Reynolds, a dealership IT provider, told Wards in a previous interview that if you had asked him 10 years ago when true e-contracting would finally make the auto-retailing scene, “I would have said five years ago.”

It has taken longer than he and others thought. But after a lot of hovering, the eagle has landed, in a somewhat tentative way.

“In reality, (e-contracting) is out there today,” Jason Swiech, product marketer at CDK Global, another automotive IT company, says at a webinar entitled, “The Modern F&I Office.” The National Automobile Dealers Assn. sponsored the event.

But e-contracting is not yet a conventional way to formally and legally consummate a vehicle purchase and all that goes with it, especially online. Nor is there much uniformity to it. “It’s already here, but what’s not here is a non-fractured process.” Swiech says in response to a Wards webinar question.

Nearly everyone involved – including consumers – notes how much document signing is associated with car buying. But paperwork hardly seems obsolete. Not yet anyways. So-called “wet signatures” remain standard practices at many dealerships.

Dealership attendees of the NADA webinar were electronically polled on how they e-contract today, specifically having a contract electronically signed and send digitally to the lender. The results:

Swiech says those results are typical of previous CDK polling.

It’s relatively easy to develop an e-contracting system. But it required much behind-the-scenes work (technological and otherwise) for an e-contract to take on the status of the authoritative document in a vehicle purchase.

“We had to build the system, then get the lenders on board and then it took about nine months for the attorneys to validate the process,” Strawsburg said of Reynolds effort. “It’s not just technology.”

(Reynolds a couple of years ago consummated its first digital car deal – including credit approval and the myriad mandatory documentation necessary to buy a car – with Mercedes-Benz Financial. It took seven minutes.)

Then there are the individual states to deal with, and not all of them are all-in.  “Some states, such as Florida, have opened up to online and electronic signatures,” Swiech says. But otherwise, states, which title and register vehicle purchases, “will be the last hill to climb for electronic signing.”

It seemed like a dead heat on a Merry-go-round.

RouteOne, a loan aggregator with 1,400 lenders in its data base, was created as a joint venture by Ally Financial, Ford Motor Credit, TD Auto Finance and Toyota Financial Services in 2002.

Last year, it had 20,000 dealers enrolled on its credit-application processing platform, including 9,000 participating in its e-contracting service. RouteOne says nearly 80% of the consumer credit applications it processes can be e-contracted.

“We may not have everything today, but these are our goals, and it’s where the industry is headed,” Swiech says of the final push.

Unexpectedly, the coronavirus crisis has spurred digital auto retailing as an alternative to in-store selling, he notes. “We’ve seen how quickly our industry can change. But all of these things that we see were going on regardless of COVID-19.”