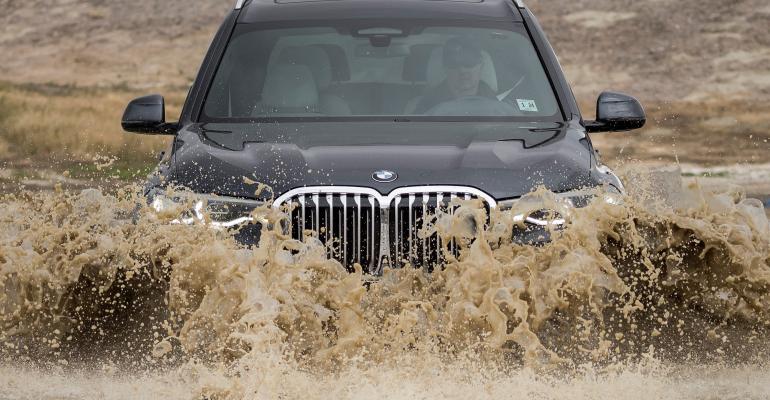 The brand has spent two years responding to disgruntled dealers, and a pipeline full of CUVs is part of the solution. Also, Bernhard Kuhnt confirms Munich is considering opening an engine plant in North America and says demand for diesel engines has waned.

BMW dealers felt the need to vent on a number of topics at their annual meeting with the German automaker at the 2017 National Automobile Dealers Assn’s convention and expo in New Orleans, complaining about inconsistent marketing messages, overly conservative vehicle styling and lackluster showroom upgrades demanded by corporate.

Two years later, management isn’t claiming every problem has been rectified but points to significant progress in responding to concerns voiced in previous dealer surveys conducted by NADA.

“We really took comments from the NADA survey very seriously, and we’re not just paying them lip service,” Bernhard Kuhnt, BMW of North America president and CEO, tells Wards in recapping the recent meeting held with dealers in San Francisco.

“If we’re not successful, it’s not because of the products,” Bernhard Kuhnt, BMW of North America president and CEO, tells Wards.

Some 90% of BMW’s 346 U.S. dealers participated in this year’s survey – an industry record two years in a row.

Five key topics for improvement were identified from a series of subcommittee meetings: complexity, financial services, vehicle loaner programs, marketing and the need to “stair step” customers through the entire product portfolio.

“You could argue in true German fashion we listened, we identified, we measured, we created topics,” Kuhnt says. “We sent them back to the dealer network, and now we’re working on them.”

BMW management in Munich and the U.S. took the criticism to heart and created new bonus and performance scorecards for all employees at the North American sales headquarters in Woodcliff Lake, NJ, “to make sure we have a focus on dealer satisfaction,” he says.

Next year, BMW of North America plans to launch a new incentive program to recognize top-performing dealers – a suggestion that came from recent surveys.

The program is still in the works, but Kuhnt says several key evaluation criteria will be included, such as sales effectiveness, service effectiveness, sales volume and training. “We’re working together with dealers to identify a best way forward,” he says.

Also contributing to a more satisfied dealer pool is a product portfolio better balanced to ride the crest of CUV popularity in the U.S.

Kuhnt says when he arrived at BMW of North America two years ago, 60% of BMW brand sales were sedans or coupes, which traditionally had been the automaker’s strength. But times had changed.

“We didn’t have the right amount of SUVs in the market,” he says.

And it made a huge difference in the bottom line, relative to key rivals Mercedes-Benz, Audi and Lexus. Grouped in with BMW, Kuhnt refers to them as the “Core Four” luxury brands. 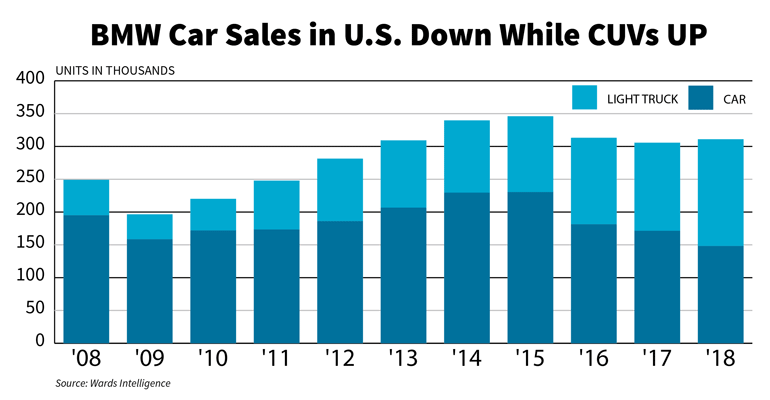 At November’s Los Angeles auto show, Kuhnt says BMW had a “beautiful problem” – not enough room for all the new product. “We stood there on the floor, running out of space,” he says, referring to booth personnel finding clever ways to arrange the new 330i, X5, X7, 8-Series and the Vision iNEXT all-electric utility vehicle. The all-new Z4 roadster comes later this year.

“We had vehicles right, left and center,” he says. “If we’re not successful, it’s not because of the products.”

This month, the three-row X7 (larger than the X5) goes on sale, one of five “sport/activity vehicles” BMW produces in Spartanburg, SC, a plant that has been expanded several times since opening in 1994. It’s now BMW’s largest plant worldwide and ships most of its output overseas.

This year, Kuhnt says he expects BMW sales to steer further toward SUVs, achieving about 55% of the overall mix.

On other topics, Kuhnt confirms Munich is considering opening an engine plant in North America. Until now, all powertrains installed in Spartanburg have been imported from Europe.

“We’re evaluating the necessity,” he says. “It’s an opportunity to expand our footprint in America.”

“The decision to bring diesel (to the U.S.) will be based on demand from consumers,” he says, and he points to waning demand for compression ignition. “If you’re a diesel fan, you want it, but unfortunately there are very few of them.”

As for returning to the North American International Auto Show in Detroit, which ended its January run this year and will switch to June in 2020, Kuhnt says BMW hasn’t ruled it out. “But we have no plans to go back at this point.”