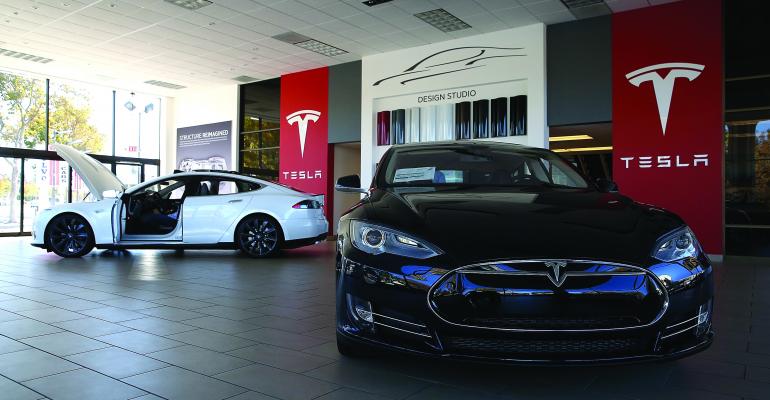 <p><strong>Tesla bucks the traditional dealership franchise system by operating its own showrooms.</strong></p>
Dealers

Someone Says ‘Amen’ to Tesla

Groups form a coalition calling for Michigan to allow the electric-vehicle maker to sell cars in the state.

A Michigan law that cars must be sold only through independent franchised dealers is coming under fire from a conservative-leaning coalition assembled by automaker Tesla, which effectively has been barred from selling cars in the state.

The new Freedom to Buy Coalition includes representatives of organizations such as the Michigan Christian Coalition, which Republican legislators and Republican Governor Rick Snyder have depended for votes in election campaigns over the years.

The enhanced dealer-franchise law weighted in favor of franchised dealers was signed by Snyder last year. The legislation bars automakers from directly selling and servicing cars in the retail market.

The coalition emerging to oppose the pro-dealer law claims it inhibits consumers.

“Consumers want more choices and more convenience,” he says. “They don’t want to be forced by the government to buy their cars from a certain type of monopoly retailer.”

The bill approved by the legislature specifically halted electric-vehicle maker  Tesla from opening stores and service centers in Michigan. Tesla has sold more than 400 cars to Michigan residents, but the nearest Tesla facility is in Cleveland, OH, according to Tesla spokesman and lobbyist Jeff Timmer.

Unlike dealerships for other auto brands, Tesla stores are company owned, similar to Apple stores. The automaker operates stores in more than 20 states, including Ohio, Indiana, Illinois, and Pennsylvania, Timmer says.

they can only sell their products through Best Buy and other retailers,” says Dave Coffey, territory manager of the Michigan Moose Assn. “Michigan’s new-car sales law just doesn’t make sense in a free market.”

Also weighing in is Larry Ward, executive director of the Michigan Conservative Energy Forum: “We think their cars are great technology, and we support policies that remove barriers to Tesla Motors in Michigan so we can see expansion of that technology.”

Consumers should be able to choose to shop at a Tesla store or at a traditional dealership, depending on their preference and the kind of car they want to buy, says Casey Kreiner, chairman of the Michigan Federation of College Republicans.

But the franchise law does not need alterations, says Terry Burns, executive vice president and secretary of the Michigan Auto Dealers Assn., who had not seen information about the “Freedom To Buy” campaign.

“We think Michigan has an excellent law,” he says. “It serves manufacturers from all over the world, dealers and consumers.”

Creating an independent dealership network does not require clearing high hurdles, Burns says. “Anyone can come in and set up a business. Tesla is certainly welcome in Michigan. But we think they should follow the law.”

The law was supported by General Motors, which campaigned for the bill on behalf of its dealers.

Tesla has beefed up its presence in heavily Republican western Michigan by acquiring a Grand Rapids tool and die maker with about 100 employees. The company is now a wholly owned subsidiary of Tesla, Timmer says.

However when he signed the original bill last spring, Governor Snyder attached a message in which he suggested the future of the automaker-franchise model is open to further discussion.

“A healthy, open discussion can and should be had over whether the current business model in Michigan should be changed,” Snyder said when he signed the bill.

Earlier, in an August, 2014 Q&A with WardsAuto, the governor said of the state's dealer-franchise laws, “They’ve worked in Michigan a long time. It’s not a priority on my list to change that. The dealer system works well in Michigan. They take good care of customers, and they have good relationships with the people making the cars.”