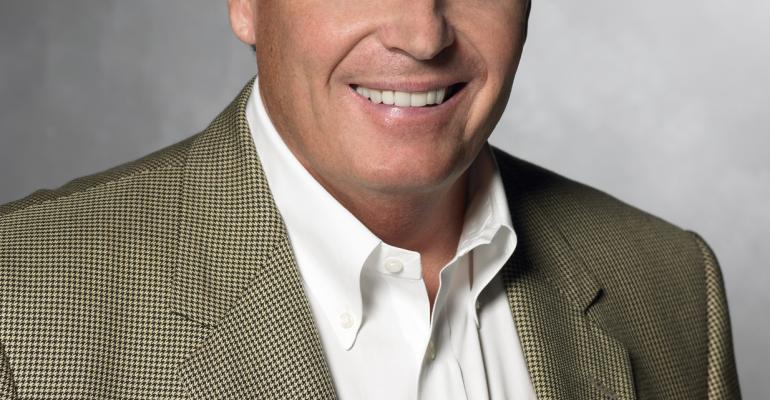 An analysis for the 27th annual WardsAuto Megadealer 100&nbsp; looks at how grand-scale auto retailing started and where it went.&nbsp;

The growth of megadealers is significant.

In the beginning of auto retailing and for several decades afterwards, the automotive retail space was primarily dominated by individual owners with single franchises in hometowns.

Then came the great public group consolidations of the 1990s. Skepticism greeted their arrival. But once they got started, they’ve become a greater presence. 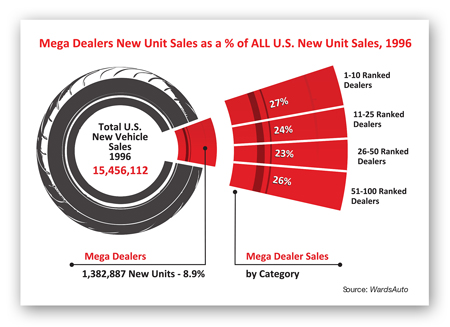 To better understand the fluctuation of the Mega 100, consider four categories:

There was remarkable parity among these segments in 1996 at the dawn of the public groups. Each of these segments represent roughly one quarter of all revenues in the Mega 100.

This all changed after AutoNation, Sonic and other publics saturated the auto-retail sector. Ever since, what used to be three quarters of all sales now was struggling to maintain half of that.

That the top 10 dealers outsell the other 90 dealers on the list speaks volumes to private equity firms and investors that are seeing this as a viable opportunity.

The heavyweight groups skew towards the Sunbelt. But we are beginning to see consolidation patterns in smaller and non-Sunbelt states as dealer groups and investors choose to maximize return on investment by not having to pay premiums for metro or Sunbelt stores.

There are a lot of tangible and intangible benefits to operating in some of these smaller or isolated markets. Single representation franchise markets allow dealers to truly advertise the benefits of the product as opposed to try to out-price a same-brand dealer in the same market. Here, the art and value of the sale are at the forefront.

However, the greatest challenge with some of the smaller or non-mainstream areas can often boil down to talent and resources. Dealers can in a way become hostage to their own employees, or lack of them. The issue is about leadership, whether at the group or store level.

As groups look to enter a market or fuel their expansion, here are some considerations. Comparing the top 10 dealer were in 1995, a couple of years before the true consolidation of 1997 occurred brings questions to the surface.

With a few exceptions – notably Bill Heard Enterprises that went bankrupt in 2008 and Dobbs Brothers Management that was acquired by AutoNation – most all the other groups on that 1995 list are still part of current list, just not at the same ranking level.

Van Tuyl and Hendrick groups seem to embody the content of James Collins’ business books, “Good to Great” and “Built to Last.”

Both Van Tyul and Hendrick are closely managed companies that not only adapted to an ever-changing retail environment, but also thrived in it when public groups were amassing and over-paying for stores. 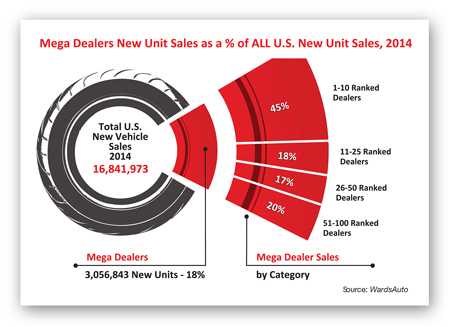 These two companies did not need to change their core operating philosophies in a desire to compete with public groups saturating the auto retail space.

They based their approach on acquiring the right opportunities in the right market, not simply trying to accumulate as many dealerships as possible in a mad grab, which essentially was how most public groups were formed in the 1990s.

Both Van Tuyl and Hendrick had a core understanding of the most important asset to fuel growth. It was mainly about having the right human capital in stores and markets.

Both groups give general managers the opportunity to earn an ownership interest in their stores. The managers are vested and entrepreneurial. They stand to win as much as lose.

This approach is not unique to these two groups. Several other groups operate this way. Rock star general managers are more likely to work for a dealer or group where they have a vested interest.

This is one of the reasons we see so many of the dealers in the top 10 in 1995 drop down and not be able to keep pace with either the publics or Van Tuyl and Hendrick.

Healthy group growth depends of having the right personnel at all levels.

Some expansion-minded dealers rapidly add stores but neglect to make sure they have the proper personnel as part of the growth plan. They can lack the management or corporate infrastructure to properly evaluate the expansion they are taking on.

The industry has seen this more than once. A dealer has been very successful operating a store or two. All of a sudden, this dealer starts believing the highest yield is not in improving those holdings, but in adding new ones.

Where they had been conservative and pragmatic, they start getting into marginally less attractive deals, and eventually into deals that only work if all goes right all the time. This defies the cyclical nature of the auto business. 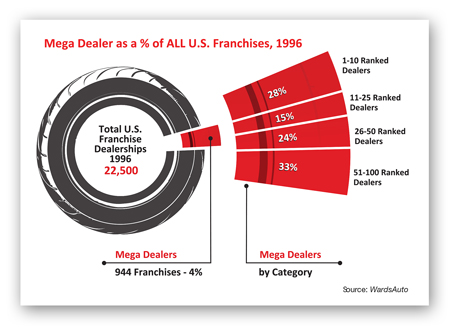 This bad situation is driven by ego and bankrolled by built-up profit reserves or investors looking to ride the next wave. It’s essentially a failure of leadership.

We see some groups that make a rapid ascent, and unlike the Buffett acquisition where a single group is being acquired, these are groups likely fueled by investor/private equity capital that is primarily being banked off the goodwill of the dealer’s past.

These rapid-ascent dealers feel they have either a unique selling proposition or that other dealers are missing the mark. While there may be small truths in both of these statements, it is usually not to the extent that the acquiring dealer thinks. Picasso or Matisse did not paint with an airbrush. Similar passion and attention to detail from a good dealer can get diluted by continued expansion. The dealer can’t dedicate the time to all the stores in an expanded portfolio. If the right leaders aren’t in place, it spells trouble.

With the topic of private equity groups making headlines, it is important to note their growth philosophy.

Typically, it’s all about quickly adding stores under the main premise that these stores are truly underperforming and can be transformed into leaner more aggressive profit driven models that will change everything.

AutoNation had a very similar philosophy, and in many ways still does. In 2000, AutoNation at its peak was just shy of 300 dealerships after its first expansion burst.

Ten years later, it had shed a third of its dealers and was just above 200 stores.  It recognized, painfully, that this business is not all volume or about grabbing all the available franchises in sight. 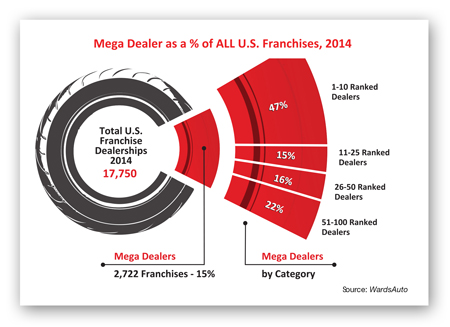 AutoNation’s growth since 2010 has been very selective, no different than Van Tuyl or Hendrick, where the quality of the dealerships trumps that of simply adding stores.

Lithia was no different. It took the growth approach of acquiring less-desirable franchises in secondary markets. Yet, it swung for the fences last year and stuck the DCH deal, a transaction that caught many by surprise, not due to the fact that DCH was acquired or that a top-10 fellow megadealer acquired it. Rather, the surprise was that Lithia pulled off the transaction.

There has been a lot of talk of Tesla and its avoidance of the dealer franchise system. Tesla has indicated that it may ultimately transition from factory-direct sales to a franchised dealer system.

If Tesla were to submit its numbers, it likely would occupy the No.12 spot. WardsAuto Megadealer 100 ranking is based on total revenues. Tesla’s is $3.1 billion.

Phil Villegas is a Principal at Axiom Advisors, a boutique automotive dealership consulting firm specializing in Mergers & Acquisitions, Enterprise Management, and Litigation Support. He can be reached at [email protected] or 786-472-2800.