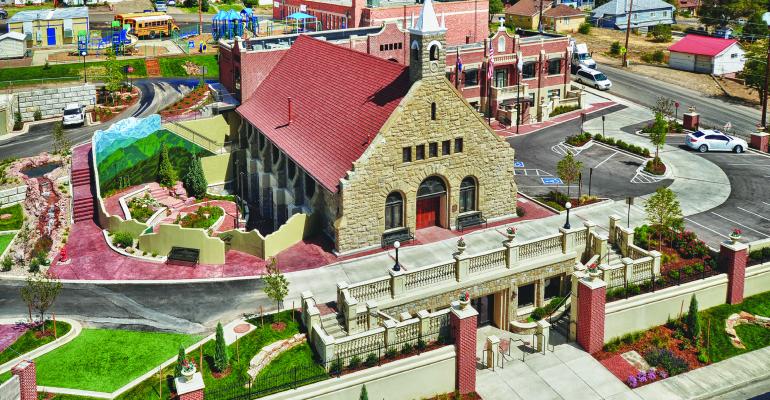 &ldquo;There must be 100,000 ways to say &lsquo;I can&rsquo;t,&rsquo; but none of them are acceptable to him,&rdquo; Michael Cimino says of his father.

The Our Lady of Mt. Carmel Roman Catholic church was built in Trinidad, CO, near the New Mexico border, in 1907 to serve Spanish and Italian immigrants who worked in the area’s coal mines.

But as the mines eventually were spent and Colorado Springs, two hours north, became the region’s focus of development, Trinidad lost jobs and population.

A serious blow came in 1998 when the Diocese of Pueblo closed Mt. Carmel. In the years that followed, the structure began to deteriorate. The roof collapsed under the weight of Colorado snowfalls and its foundation crumbled.

Mt. Carmel’s demise hit Jay Cimino particularly hard. The philanthropic president and CEO of the Phil Long Family of Dealerships had attended Mass there as a young man and traces his family roots for three generations in Trinidad.

After watching the church deteriorate for nearly a decade, Cimino and his family bought the property for $150,000 in 2007, but its new use was unclear. All Cimino knew was that the building had the potential to once again be a community focal point.

When Cimino learned of an independent study that showed health and wellness were among the region’s greatest needs, his vision was clarified: the church would be re-born as the Mt. Carmel Health, Wellness, and Community Center to provide primary and behavioral health care to the locals.

A $12 million renovation of the former church, funded entirely by the Cimino family, began in 2009. In 2011, Cimino deeded the property to Mount Carmel of Colorado, a non-profit organization created to operate the facility. The new center officially opened in 2012.

“I have to be honest, when my dad said he wanted to open a health-care clinic, I thought he was the one who needed a doctor,” says daughter Gina Cimino, president of Mt. Carmel of Colorado. “I said, ‘Dad, we fix cars, we don’t fix people.’

“It was like learning a different language. But we looked at all the studies and saw that Las Animas County was 54th out of 57 counties in the state in health care, and over half of the residents traveled outside of the county to be treated. There were real problems there, like teenage suicides and drug use, so we felt the best use of the church was to open a health clinic.”

Services include physical exams, injury and illness diagnosis and prescriptions. Mt. Carmel’s 29-person team counsels patients who are at risk for obesity, diabetes or cardiovascular disease.

“We also run wellness and enrichment programs at Mt. Carmel,” Gina Cimino says. “They range from Leadership 21, where we teach kids about how government works to Boot Camp for New Dads that teaches all of the important how-to’s of taking care of a new baby from a dad’s perspective.”

The Mount Carmel Center for Health and Wellness operates on a budget of $1 million per year. “We live on grants, sponsorships, and donations,” Gina Cimino says.

The dealerships’ success helps, too. “After all the bills are paid, we calculate the net profit after tax for each of our dealerships, then we pay 1% of that profit to Mt. Carmel every month,” says son Michael Cimino, vice president of the Phil Long Dealerships. “We don’t take it off the car and we don’t ask employees to participate.”

Jay Cimino and the Phil Long dealerships are no strangers to philanthropy. A team of Phil Long Ford master technicians dismantled, rebuilt, and restored 11 ’02 and ’03 Ford Crown Victoria cruisers for the Colorado Springs Police Dept., saving taxpayers more than $200,000.

Cimino created the Phil Long Community Fund, which provides grants for 501(c)3 youth-based organizations. He has partnered with the NFL’s Denver Broncos to build playgrounds throughout Colorado.

The America Red Ross named Cimino 2013 Humanitarian of the Year.

“Dad’s a huge visionary, he dreams in color,” says Michael Cimino. “He gets a vision, and he challenges that vision all the way up and down. If anyone says he can’t do something, it just gives him more power to push forward. There must be 100,000 ways to say ‘I can’t,’ but none of them are acceptable to him.”

With total revenue of $711.7 million last year, the organization ranks No.82 on the 2016 WardsAuto Megadealer 100. The group sold 24,580 new and used vehicles last year. Three stores individually were on the 2015 WardsAuto Dealer 500.

The group sells pre-owned vehicles under its ValuCar and 5995 Bargain Corner brands.

For Jay Cimino, the keys to running a successful dealership come in groups of five.

“We’re very strong with what we call the five P’s,” he says. “People, passion, processes, product – we consider ourselves the product; what we sell is the by-product – and profit. Those drive everything.”

He adds: “Under the five P’s are five leadership steps: acquiring a vision, challenging that vision and be challenged, communicating and connecting with our people, making sure that everybody’s aligned with what we’re doing and executing the plan.”

The strategy is rounded out with five sales steps: meet and establish rapport with the customer; determine their needs and wants; build value; get “mental ownership” through demo drives; get commitment and close the sale.

“That’s kind of our bible,” Jay Cimino says. “It’s real simple because everything we think is important comes in fives.”

His zeal for health and wellness extends to his employees and, to him, also makes good business sense.

In 2013 he opened a free employee health clinic and fitness center at the Phil Long Ford Motor City location in Colorado Springs. In December, the clinic was relocated to an area of the group’s collision center, which has more space and better parking.

The clinic operates three days a week and is staffed by a private practice physician, a physician’s assistant, and two registered nurses. A Ph.D. runs the fitness center.

“The clinic lets people leave their jobs for an appointment and quickly get back to work,” says Jay Cimino. “That’s the benefit to the employees and to us.”

In-Dealership Clinics Makes Sense To Him

“To be quite frank, it’s common sense why we (run the in-house clinic),” says Michael Cimino. “About four or five years ago we looked at what we could do to better care for our employees, but at the same time control and mitigate our costs.

“We had a lot of experience with self-insuring for workman’s comp, so we started doing it for health care. I haven’t been to my family practitioner in two and a half years. It’s easier for me to go to work.”

The benefits run both ways: “Employees still have the privacy they have with their own doctor, and they don’t pay a deductible,” Michael Cimino says. “We take out the middleman and it’s still a lot less than paying an insurance company.”

Back at Mt. Carmel, Jay Cimino’s work is not done. The former U.S. Marine purchased a building that had housed television station KOAA in Colorado Springs for $500,000 in 2014. It just became the Mt. Carmel Center of Excellence of Colorado to serve the region’s estimated 80,000 veterans.

The Center of Excellence, part of the non-profit that also operates the Mt. Carmel Health and Wellness Center in Trinidad, is run by retired U.S. Army Colonel Bob McLaughlin, a veteran of five tours of duty from the Balkans to Afghanistan.

“I met Jay when I was garrison commander at Ft. Carson from 2009 to 2012,” McLaughlin says. “He asked me what I was going to do when I retired, and I said, ‘I’m going to go to the East coast.’ He said, ‘I don’t think so, I think you’re going to come to Colorado Springs and help me help veterans.’”

The facility offers a veteran and family resource center; career and employment services, including an incubator to help veterans with an entrepreneurial spirit; wellness and transition services; and outreach to partners like the USO.

“The two biggest issues for veterans in transition are behavioral health care and financial planning-assistance-counsel,” McLaughlin says. “Our mantra is to be a beacon of support for veterans and their families.” He predicts his team will ultimately serve over 1,600 veterans annually.

“Jay is a visionary, a giver, who does things rapidly and sees things that the average person doesn’t see,” McLaughlin says. “He wants to help veterans and their families who deserve a chance to be productive members of the community, and he brings the right teams together to execute his vision.

“It’s dumbfounding to me how he is able to run an incredibly successful business and still find such time and energy for the community.”