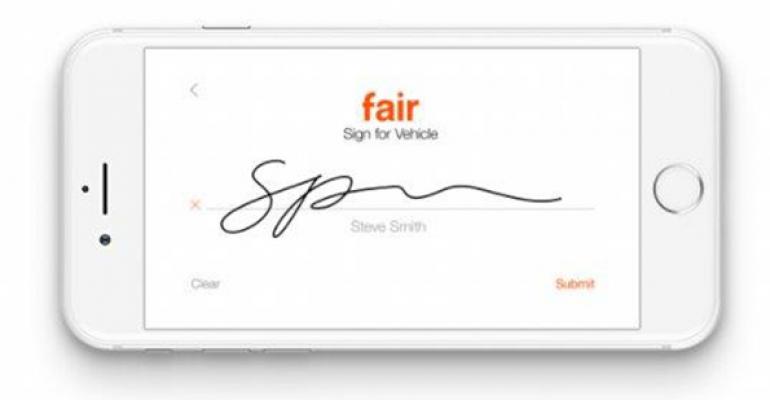 Customers shopping through Fair may drive their vehicles for as long or short a time as they want, as long as they give at least five days&rsquo; notice. In other words, no fixed terms.&nbsp;

The Fair mobile app, launched about two months ago in the Los Angeles area and slated to expand to select U.S. markets in 2018, allows used-car buyers to shop, get approval, pay for a vehicle and then order a ready-to-pick-up model in as few as five minutes.

“We did a ton of surveys to find out where the pain points are,” Fair co-founder Georg Bauer tells WardsAuto during an interview. That research confirmed vehicle buyers consider it “really unpleasant to spend two or three hours at a dealership, being in the corner office with the F&I manager and having to deal with tons of paperwork, 15 signatures and 25 pages which the consumer doesn’t really understand.”

Consumers, he says, have told him “getting a car should be as easy as streaming a movie on Netflix – why not?”

Analysts call that a “car-as-a-service” business model, while Bauer, also Fair’s president, describes it as the long-awaited “disruptive change” needed by the auto industry to conform to the emergent digital marketplace and better meet consumers’ needs.

That was the mindset that led Bauer to team up with tech entrepreneur Scott Painter, founder of the CarsDirect and TrueCar auto-research and internet-sales sites, to establish Santa Monica, CA-based Fair, which recently announced it completed a round of funding from BMW’s iVentures, Penske Automotive Group, Mercedes-Benz and other investors.

Bauer, an automotive financial-services veteran whose 30-plus years in the sector have included top posts with Mercedes-Benz Credit in the U.S., global financial services for BMW Group and Tesla’s financial operations in the European Union and Asia Pacific markets, says he and Painter met about 1½ years ago and ended up brainstorming and strategizing about how Fair can move the customer experience and the financial solutions, as well as the ownership options, to a new level.

As explained on the Fair.com website: a customer scans their driver license; runs their financial numbers online to determine the best monthly payment plan; chooses from a customized listing of available pre-owned vehicles (all within 6 years old and under 70,000 miles [112,700 km] and held at Fair’s roughly 80 partner dealerships); signs the leasing agreement; picks up the vehicle at the dealership; returns the vehicle whenever they want, then repeats the process.

Customers make a “start payment” every time they shop through Fair, with the initial amount beginning at about $1,000, based on their reported finances and price range.

Fair customers may drive their vehicles for as long or short a time as they want, provided they give at least five days’ notice. In other words, no fixed terms.

Bauer explains when a customer puts that first sum down on a Fair vehicle it usually helps them understand they are making an extended, albeit flexible, investment into their Fair ride, and not just looking to take it for a spin for a couple of days or weeks.

“We do not want to be considered a rental company,” he says.

Once the customer signs a purchase agreement through their mobile device, Fair buys and then keeps ownership of the chosen vehicle, although it’s registered under the name of the customer, who also assumes all other responsibility, aside from the limited warranty, roadside assistance and routine maintenance package offered with every Fair automobile.

Bauer asserts a Fair customer won’t be able to find a lower monthly payment for the same vehicle model through a traditional 72-month loan or 36-month lease.

Fair makes a profit through funding margins and the incremental insurance, insurance and extended-warranty fees rolled up in the “all-in-one” payments. As such, the company’s fleet comprises only vehicles that fall within a specific value range.

Early this month, the Fair app listed a total of 1,252 available vehicles.

Even though Bauer and Painter have been calling for a technological sea change in automotive sales, they’re not anticipating a human-less marketplace. On the contrary, says Bauer, who believes the Fair business model will open new opportunities for dealerships to flourish.

Aside from the vehicle leases, Fair sends its partner dealerships an ongoing stream of business alternatives to generate revenue from the mounting overstock of lease-return vehicles. That includes the chance to purchase returned vehicles for predetermined prices.

In addition, consumers could return to lease from Fair and thereby interact with partner dealers several times within the span of a traditional lease – during which they would otherwise be out of the market.

Brick-and-Mortar Stores Challenged But Not Obsolete

Brian Maas, president of the California New Car Dealers Assn., tells WardsAuto he understands Fair’s expectation of working together with dealers, as well as the dealers’ interest in finding new and better business ideas.

But Maas is not too concerned about his members’ ability to survive in the new digital frontier, saying: “Everbody’s got to change their game to match the changing tastes and interests of consumers and dealers. For 100 years, (they) have been at the forefront of that...they’re very good at adapting to changing market conditions because they’re in touch with their customers in ways that no other vendor really is.”

Maas says he and his staff are conducting an analysis of the Fair app to determine “whether it’s compliant with California law...and supplies consumers with the disclosure that they need.”

Despite the prevailing dissatisfaction with traditional sales experiences, not all the market numbers are bad for dealers, suggests Marco Schnabl, co-founder and CEO of automotiveMastermind, a predictive consumer behavior service with offices in Los Angeles and New York.

He says internal and external surveys reveal 75% of consumers across all generations still want to see a product in the store, and one-third of all consumers feel bricks-and-mortar locations remain just as important as online markets.

Perhaps more surprising, Schnabl says a majority of Millennials value traditional stores as much as did their “Silent Generation” counterparts – born from the mid-1920s to mid-40s – when they drove market trends.

“It now is all on the dealerships, to take a really close look inside and say, ‘Is my current staff well-positioned, well-trained, and is my internal culture also (one where) consumers come first, are the consumers the front-of-mind with everything I do?’” he says.

Schnabl acknowledges dealerships are under enormous pressure from OEMs to sell cars while margins are shrinking. “This transformation that we’re going through, there’s going to be some pain...but it doesn’t mean that the dealerships are becoming obsolete. Dealerships still need to be local, they still need to support you.”

When the digital revolution makes dealers able to access the sales data they need quickly, “they tend to focus on the one thing, and one thing only that they really do the best: just building relationships, building trust and providing quality information to the consumer,” Schnabl says.

Consumers will continue to feel “a human desire to see the goods before they make the final purchase decision,” he says. “They still what to see the whites in the eyes from the person they’re buying their second-highest investment from.”