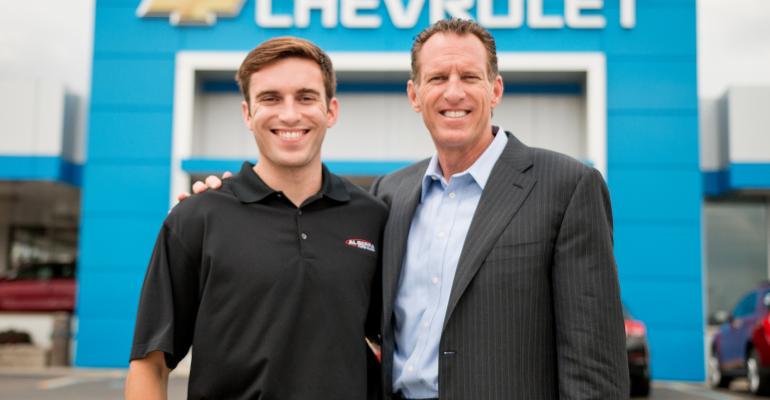 That comment from Jerry Mullinax, co-owner of six dealerships in Florida, Alabama, and Washington state, all of which are on the 2017 WardsAuto Dealer 500 (ranging from No.69 to No.460), reflects a growing sense among dealers that a change is coming.

Though no one has pulled the emergency cord, yet the auto-sales express that has been racing along at a record pace for the past seven years appears to be slowing.

May U.S. auto sales registered a 0.6% drop compared to 2016, the fifth consecutive month of declining sales this year.

Mullinax doesn’t think market conditions will be as dramatic as they were in 2008-2009 when sales plummeted. Three of his six stores have increased new-car sales in 2016, but results in the other three are flat. He will open a seventh dealership, a Hyundai franchise, in Clermont, FL this fall.

“We’re just trying to prepare by getting better at service, parts, and used cars,” he says. “Not that we aren’t focused on new cars, we are. But in order to sell these cars, the factory just keeps increasing the incentives to keep the sales rate up. The demand doesn’t feel organic; it feels ‘made.’”

The WardsAuto Dealer 500 collectively sold 1,547,951 new and used vehicles in 2016. Total revenue was $57.4 billion. The annual ranking is in its 31st year. (Click the top item in the related media box at upper left to see the entire list.)

“It’s not surprising that vehicle gross has been declining for some time,” says Steven Szakaly, NADA’s chief economist. “We’re seeing the industry move to a much greater focus on warranty work, service and parts, and customer pay because there’s really no money for a new-car dealer in the actually sale of that vehicle.”

There are many bright spots on this year’s  ranking. The Al Serra Auto Plaza in Grand Blanc, MI, which represents 12 brands, jumped to No.5 from No.6 last year, selling 14,041 new and used units.

“The selling environment is great, I don’t think you could ask for or expect much more,” says Executive Manager Matt Serra. “Interest rates are good, the economy and the stock market are doing well. There’s nothing crazy that’s going to shake up the buying environment.

“We had a record year last year at the Auto Plaza, and in terms of new- and used-vehicle volume we’re up a little over 10% this year. We expect that to continue.”

“Used vehicles give you a better profit opportunity,” he says. “If we’re able to source them right you can lower your costs and control margins a little better. You can also grow your profit margin though fixed operations. If you attract really good technicians and advisers and have streamlined processes and deliver a good product, that’s where you can fetch really good profitability.”

Parent company Serra Automotive has 36 dealerships and 52 franchises in seven states. It sold 58,678 new and used vehicles in 2016 and had total revenue of $1.84 billion.

“There’s been talk for the past few years that we’re peaking and if that happens to be 16.5 or 17 million, that’s not a bad peak,” says Joe Serra, president of Serra Automotive and Matt’s father. “There’s tremendous opportunity for those in the retail automotive industry with a SAAR anything above 15 or 15 and a half.

“Our organization is diversified enough that we can weather any type of small dip. I always say good times create bad habits and bad times create good habits.

“We’ve had some good years, and the negative of that is just human nature – you start to get some bad habits and get back to some practices that you shouldn’t be doing but you can afford to do. If there is a dip, the silver lining might be that it’ll force all my partners and myself to get back to some good habits.”

The Cardinale Automotive Group operates 19 dealerships in California, Arizona, and Nevada and represents 11 OEM “partners.” Cardinale had three stores on the WardsAuto Dealer 500 in 2016, but that has grown to six this year, ranging from No.147 to No.461. Those stores sold 23,482 new and used units last year and posted total revenue of $580.2 million.

“We are really seeing the market plateauing and shrink,” says Cardinale CEO Erich Gail. “Pre-owned values will drop over the next 12 to 18 months. The SAAR for new vehicles will right-size itself down to 16 (million), possibly 15 million. With options like Maven (GM’s ride sharing start-up) and pool leases, the ability to secure personal transportation in a variety of ways is only continuing to grow.”

Gail expects continued erosion in new- and used-car grosses and lower used-car valuations. However, because Cardinale is management-driven, not market-driven, he sees a “velvet ring” of opportunity.

“We build our daily operations in all departments around our objectives regardless of market conditions,” Gail says. “We don’t bloat our expenses or investments to chase an unsustainable market.

“Cardinale and groups like us have prepared for moments like this since the last economic downturn. Their disciplines were ready, their expense controls were proper, store performance was great, and their CSI was on point. We will only step so far so we do not put ourselves in a position to be overextended. It has to do with daily discipline.”

Gail shuns a “spray-and-pray” marketing approach where dealers often spend over $600 per unit to try to reach every potential customer.

“We have thrown that book completely out the window,” he says. “We target and acquire in-market buyers using (technology). We know that consumers are looking for XYZ in our market and we target them specifically. Our investment per unit sold averages $186, all in.”

While used cars and fixed operations are seen as the go-to profit saviors in a downturn, one industry thought leader and former dealer says the future belongs to the digital revolution.

“The most expensive part of selling a car is selling a car,” says Dale Pollack, senior executive vice president of Cox Automotive and founder of dealer management software vAuto.

“Ultimately a very important solution for dealers will be digital retailing,” he adds.

When a consumer can find a car and walk into a dealership with a deal already structured, it takes out a lot of the cost of selling a car, he says “Customer satisfaction also rises dramatically. Addressing margin compression will not just involve cutting every possible expense. Dealers are going to have to change the way they sell cars – and digital retailing holds that promise.”

While NADA’s Szakaly acknowledges difficulties dealers face, he is optimistic about their adaptability.

“Dealers can respond very quickly to market changes because they’re small and very nimble retailers,” he says. “We’ve seen this because productivity in our industry has grown dramatically over the last five years. We sell more used cars, more new cars and service more vehicles than ever before in the history of this industry and we’re doing so with fewer dealerships than ever before. Adaptation has already happened and will continue to happen.”