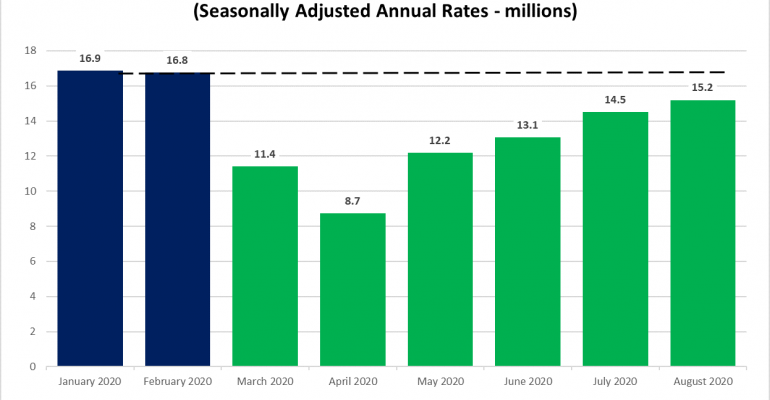 Growth in U.S. new-vehicle sales is expected to level off, but there is potential upside if the industry can overcome economic challenges and sparse inventory. After the pause, sales are expected to continue sequential growth later in 2021.

U.S. demand for light vehicles has roared back since the sudden precipitous decline caused by COVID-19 that started in March and bottomed out at an annualized rate of 8.7 million in April – a 50-year low - with volume declining 46% year-over-year to 717,000 units.

Manufacturers not only increased but strategically placed incentives and attractive financing offers on certain vehicles, dealers adjusted to lockdowns by upping their online sales efforts among other things, pricing on used vehicles remained solid and sales came out of the pandemic doldrums faster than most expected.

By the end of the summer, while fleet volume was still flagging, retail – the vehicles sold off dealer lots – was closing in on pre-recession totals.

Although growth is expected to temporarily flatten, with the final four months of 2020 running at a 14.5 million-unit annualized rate, they still will remain well above April’s trough. Currently, Wards Intelligence and partner LMC Automotive expect calendar-year sales in 2020 to end at 13.9 million units, well below the 17-plus million averaged over the past five years, but above many initial pandemic projections calling for a sub-13 million year.

After the pause, sales are expected to continue sequential growth later in 2021.

However, there is more upside opportunity than downside to the 2020 forecast.

One reason is pure momentum. Sales have continually surprised on the high side since the spring, even after incentive spending came back down to Earth after spiking upward 26% year-over-year in April. Since then, there also has been cutbacks in long-term financing options. 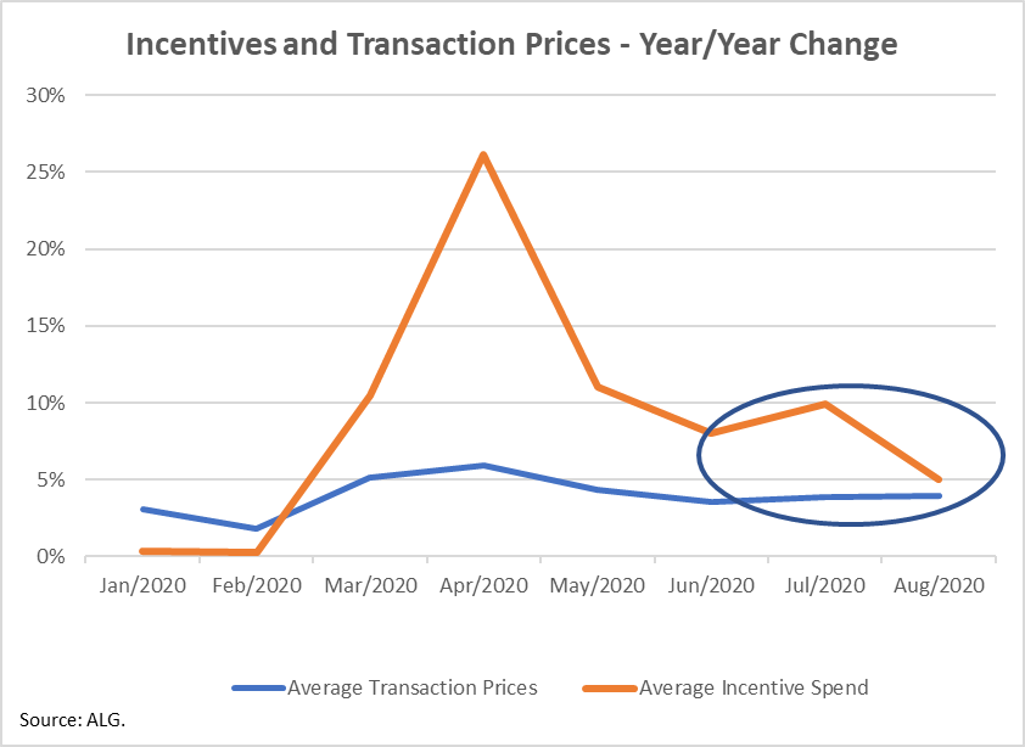 One consequence to the sharp growth in sales since April is that automakers are finding it tougher to restock dealers with new vehicles, leading to an extraordinarily high rate in turnover in recent months to meet demand. That culminated with August sales volume equaling roughly half of the nationwide inventory the month started with, compared with typical turnover closer to one-third.

Widespread vehicle assembly plant shutdowns in the spring caused inventory to drop to 9-year lows and, based on Wards Intelligence projections, is not expected to improve much above that level over the rest of the year. Indeed, U.S. light-vehicle inventory ended August at 2.6 million units, down 26% year-over-year and lowest for the month since 2011’s 2.0 million. 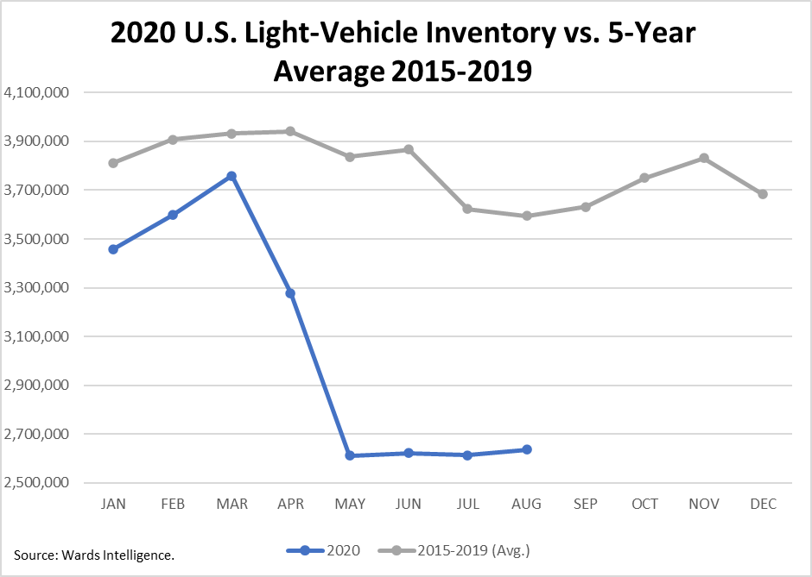 By the numbers, sales can run higher than projected depending on how much above normal dealers can continue turning over inventory – which might become more challenging when the ’21 models, with their mostly higher prices, become widely available in the fourth quarter. But, in theory, if dealers can continue turning over half their inventory, there is enough production in the pipeline for sales to track at an annualized rate of 16 million for the rest of 2020.

Such a surge could lift total 2020 sales to as high as 14.5 million units, and to the extent sales significantly outdo the current outlook, that would lead to an increase in 2021’s current forecast of 15.2 million units.

Still, what cannot be discounted is the possibility of a slowdown. Consumer confidence could continue to fall, and the pace of rehiring might not have enough strength to offset the impact of permanent job losses, including many recently announced corporate layoffs, to keep sales rising through December.

Also, pent-up demand from delayed purchases and deferred lease returns in the second quarter could be starting to play out.

Furthermore, there still is the issue of supply bottlenecks in key segments to contend with.

Vehicles most pinched for supply are pickups, which ended August with inventory down 44%, and that could worsen depending on how much Ford has to slow production for changeover to its redesigned ’21-model F-150 in September and October.

There currently also is extra thin inventory of sport/utility vehicles, mainly due to a slowdown in production of General Motors’ fullsize SUVs, which are being re-engineered for the ’21 model year. However, availability is projected to be adequate by November, possibly sooner.

Ironically, despite severely lean inventory, pickups are propping sales by outdoing all other segments over the past six months.

Volume sales of pickups since March declined only 16% year-over-year, compared with a 28% drop for the entire industry – 31% for the industry less pickups.

Initially, automakers reported that higher incentives from the manufacturers, juiced by generous offers of low-interest long-term financing, propped demand for pickups vs. other vehicles, but sales apparently stayed revved up over the summer from nationwide improvements in housing and construction – the latter thought to have been sparked by housebound homeowners doing more upgrades.

Heading into the final months of the year, especially the fourth quarter, lean inventory of fullsize trucks – the majority being large pickups - could become a more acute issue.

In recent years, combined sales of large pickups, SUVs and vans have been strongest in the fourth quarter. Fullsize-truck inventory is down 35% year-over-year at a time when demand could be about to get stronger.

While it could be good for overall sales, an increase in commercial fleet orders could strain the supply of fullsize trucks for dealers in the fourth quarter.

Commercial fleet volume is expected to rebound faster than rental volume, and Fiat Chrysler already announced it was putting more effort into satisfying fleet customers in the second half of the year. If others follow suit, more overall production volume could be allotted to accommodate fleet customers vs. retail.

Ultimately, what could excite consumers and prop shopper traffic - and maintain high inventory turnover - is the bevy of all-new and redesigned products still to come for the ’21-model year.

Although some intros were delayed to next year due to the impact from the virus, there was no significant reduction in the originally scheduled number of fresh vehicles coming to dealer lots in 2020 or 2021. In fact, from August Wards Intelligence expects 18 new or redesigned ’21-model cars and trucks hit the market in 2020, followed by an additional four intros in early 2021.

This article is sponsored by

The source of the Wards quantitative data on vehicle volumes is the automakers themselves who report their figures directly to Wards as part of a long-standing relationship.  In cases in which specific details or data is not made available, Wards Intelligence analysts estimate based on established, reliable quantitative inputs, historical knowledge and current trends analysis.

Wards has been a leader in automotive research and intelligence since 1924, providing data, forecasts and market interpretations to those involved in automotive businesses.  Our services are trusted to inform and aid the world’s largest automakers, tier 1 and other suppliers, governments, and the financial institutions investing in the automotive industry in their business decisions

Sponsored Content
EV growth not by mere chance – but the result of scaling choices
Jul 12, 2022