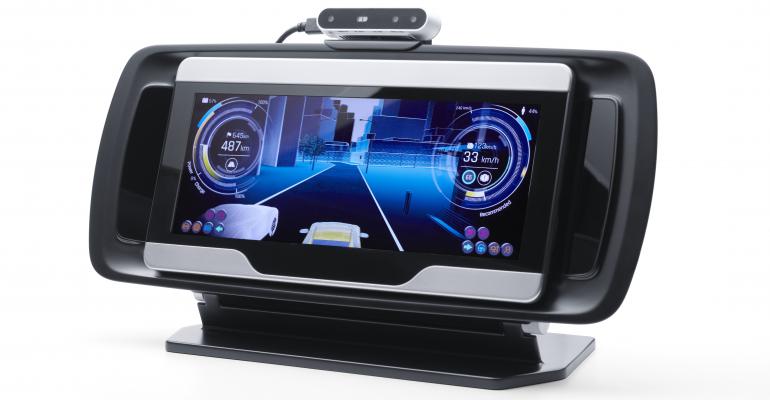 The supplier sees its two sophisticated domain controllers working together in future battery-electric and self-piloting vehicles to improve performance and offer a better user experience for drivers and passengers.

LAS VEGAS – The automobiles of the future will require massive brains – two of them, to be exact, according to Visteon.

The automotive electronics supplier believes next-generation vehicles due in the early 2020s – both more electrified and autonomous – will rely mainly on two high-powered computers, one to control the cockpit and user interface and another to regulate the vehicle’s movement, with the two sharing data and working in parallel.

“The shift toward electric cars and improved automated driving technology is an opportunity to rethink the cockpit in terms of how drivers and passengers interact with the vehicle and their surroundings,” says Visteon President and CEO Sachin Lawande. “As vehicles become more automated, there is a need for fresh approaches to the human-machine interface in the cockpit – to ensure control can shift safely and seamlessly between the driver and the vehicle, and to keep occupants informed, engaged and entertained.”

Here at CES 2019, Visteon shows how that will transform the vehicle interior, unveiling cockpit displays that not only will communicate better and more intuitively with the driver and passengers but also allow designers much greater creative freedom.

The exhibit marks what Upton Bowden, director-Advanced Technology Development for Visteon, calls the third wave of digital instrumentation. In the first phase, advanced, configurable electronic displays made their way into high-end luxury vehicles. They advanced into more mainstream models in the second wave.

However, in those first two phases, digital displays were restricted to flat, rectangular panels, while the new wave will see more creative shapes that fit better with the overall design of the interior and can provide greater brand distinction.

“The most cost-efficient display is a rectangle because it can be cut and there’s minimal waste,” Bowden says. “However, if you are able to tailor it in shape and form and function, you can have some enhanced styling. (Designers) can create a unique design by having curved display surfaces with rounded corners and edges – which ultimately gets to the styling differentiation of vehicles.”

Some of the high-resolution panels shown here stretch from steering wheel to center stack, bending to follow the shape of the potential interiors envisioned by vehicle designers.

“Across the board, automotive designers are very interested in enhancing the styling content of interiors and they’re very eager to work with something other than rectangular surfaces,” Bowden says, predicting the curved displays will be seen in production vehicles within two to three years.

But not only do the displays look better, they function better, because in Bowden’s third wave the cockpit evolves from a collection of largely discrete components to one with fully integrated displays that communicate with each other and the vehicle’s occupants. That transition is what will pave the way for even more sophisticated EV and AV applications.

“You have to set the stage for a cockpit experience by having a fully digital cockpit, upgradeable, integrated, all tied together with high-speed communication and advanced digital displays,” Bowden says.

The underlying technology is Visteon’s SmartCore domain controller that already is in use in Mercedes A- and B-Class models and is being introduced to the brand’s other model lines. It integrates the core instrumentation, head-up display and infotainment system operation into one electronic control unit that is connected to the cloud.

On display here is one concept that uses a single SmartCore controller to operate five screens, including the instrumentation, head-up display, center stack, and passenger-side and rear-seat displays.

Beyond the Mercedes application, several SmartCore programs are in the works with other OEs, Bowden says.

“When you go to a SmartCore approach, you can have a richer user experience,” the Visteon executive says. “You’re able to share virtually any content back and forth throughout the vehicle. You can put up critical messaging in front of the driver, you can share destination entry that maybe the passenger is putting in and getting turn-by-turn information. It can be a much more situationally aware experience in the cockpit. Not to mention it is continuously up to date because it is synchronized at the cloud.”

While SmartCore is focused on graphic displays, DriveCore pulls in and crunches data from onboard cameras, lidar, radar, GPS and other sensors, and it controls various ADAS features, such as lane-keeping, adaptive cruise control and automatic emergency braking.

When it first showed off DriveCore here a year ago, Visteon said it was talking to a number OEMs about 2020 production, and this year Bowden says several development programs now are in the works. 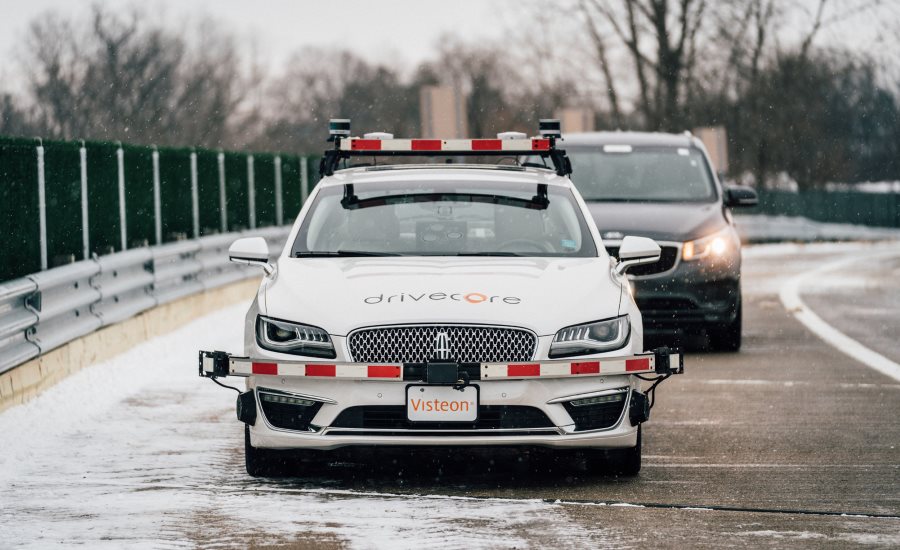 Ultimately, Visteon sees the two domain controllers working together to relay critical information to the driver. Bowden points to use in an EV, for example, noting the vehicle could work with the navigation system to calculate whether the vehicle has enough battery range to make it to the destination and then through SmartCore advise the driver on how to deactivate various systems to conserve power if needed.

“And both systems are designed to optimize for power efficiency in an electric-vehicle environment, meaning if you don’t need all the processing power or input from all the sensors happening, it is able to load-shed, which is to reduce power consumption, where a portion of the system essentially goes to sleep to minimize power drain.”

In the case of autonomous vehicles, the coordination between domain controllers will enable the car to communicate better with the passengers about what it sees and what it is about to do, Bowden says.

Also shown here are 3D displays. Visteon officials say 3D may be needed to provide sideview depth perception once cameras replace sideview mirrors, a movement already under way in Europe. The 3D displays also can put critical information – such as collision-avoidance alerts – right in the driver’s face, ensuring it gets the attention needed.