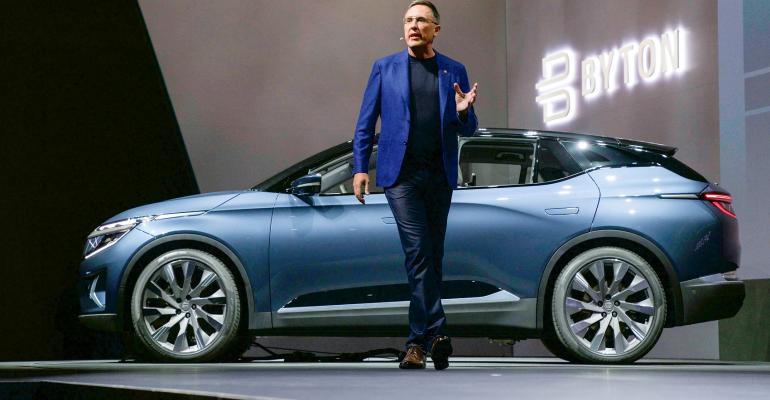 Is it legal to sell cars, circumventing the entrenched, franchised new-car system, even if some dealers are partners? Byton is confident it is.

“People are telling me they are ready for an alternative proposition, when it comes to a premium electric vehicle. And I believe Byton is ready to be that alternative,” says Daniel Kirchert, Byton CEO and co-founder, in a press conference here at CES 2020.

The press conference features what Byton says is a production-ready version of its M-Byte SUV. Its world market debut is slated for China in mid-2020. The U.S. market and Europe are to follow, about 18 months later, the company says. That would be late 2021.

The Chinese electric-vehicle maker says it would offer direct-to-consumer sales online in California, but it would also offer online sales to customers outside California, in states where such transactions are legal, without any involvement by a franchised, new-car dealer.

That’s bound to be controversial with franchised dealers, judging by the uproar Tesla factory stores created earlier in some states with strong franchise protection laws.

Another wrinkle is that Byton also aims to sign up retail “partners” with premium-brand auto-retail experience who would take online orders at their brick-and-mortar facilities.

Either way, such a transaction is legally an online, direct-to-consumer matter, whether the online transaction takes place at an actual showroom or at the consumer’s home, office or wherever, says Jose Guerrero, managing director for Byton Americas, Santa Clara, CA.

He insists Byton’s retail business model is something new and different from traditional franchised dealers, where retailers buy inventory at wholesale and sell it at retail, and different from Tesla’s preferred, direct-to-consumer model.

Byton is already narrowing down its search for a location and a partner for its “flagship” retail point, in the Los Angeles metro area, Guerrero says, in a quick interview on the sidelines of the Byton press conference here.

In California, Byton is initially looking for a total of about 10 physical stores, he says.

From California, Byton would probably expand its sales territory first into the Pacific Northwest, followed by markets in the New York metro area, Florida, and Texas, he predicts.

Ultimately, a total of about 20 U.S. states would account for the highest concentration of EV buyers, he said.

But is it legal to sell cars, circumventing the entrenched, franchised new-car system, even if some dealers are partners? “We’re confident it is,” Guerrero says.

The company saw it as a milestone for Byton in November winning approval for both a wholesale and a retail license to sell cars in California.

“This took a year-and-a-half of legal groundwork,” Guerrero says. “We have really done our homework on this.”