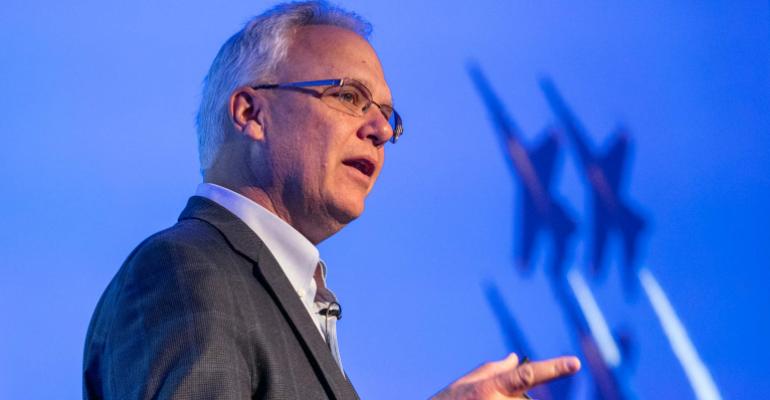 Joe Wilssens Photography, Inc.
“Educators have said, ‘This is what school should be like,’” Sheridan says of his company, Menlo Innovations.
Industry News

Unhappy With Tech Industry’s ‘Chaos,’ He Tried Something New

Menlo Innovations regularly draws visitors who are interested in an atmosphere that fosters amicable collaboration and bold experimentation.

TRAVERSE CITY, MI – CEO Rich Sheridan of software company Menlo Innovations has created an unconventional workplace environment that encourages employees to collaboratively try new things and not worry if they don’t pan out.

“Fight fear, embrace change and run with the experiment rather than form a committee to study it,” he says here during a keynote speech that opens the Center for Automotive Research’s annual Management Briefing Seminars.

“I tell our team if experiments aren’t failing at a 50% rate, we’re not experimenting enough,” Sheridan tells the audience. “Learn from failure.”

Employees of Sheridan’s Ann Arbor, MI-based company work in a big open room, two to a computer. They work in pairs that switch up regularly. They can bring their infants and toddlers to work.

A byproduct of the child-friendly office: “We discovered our customers behave better when you bring babies to meetings,” says the CEO, who has written two books, “Joy Inc.” and “Chief Joy Officer.”

Sheridan grew up in Macomb County, MI. He was a computer whiz kid who worked as a programmer before he could drive a car. He graduated from the University of Michigan in 1982. The career ahead “looked perfect” and was – for a while.

But he became disillusioned with what he calls the “chaotic” atmosphere of the tech industry in which employees work hard but accomplish little and customers often are unhappy.

“There’s an old saying, ‘To err is human, but to really foul things up requires a computer,’” he says.

When the internet bubble burst in 2001, he lost his top-level job at a tech company. He broke the news to his wife. “She said, ‘You’re unemployed?’ I said, ‘No, honey, I’m an entrepreneur now.’”

He considered opening a canoe park in Minnesota but instead went on to found Menlo Innovations, named for Thomas Edison’s research lab in Menlo Park, NJ. As a youth, Sheridan regularly visited a re-creation of that facility at Greenfield Village in Dearborn, MI.

Menlo Innovations regularly draws visitors, from business people to educators, who want to see what it looks like and are interested in a culture that fosters amicable collaboration and bold experimentation.

“Educators have said, ‘This is what school should be like,’” Sheridan says.