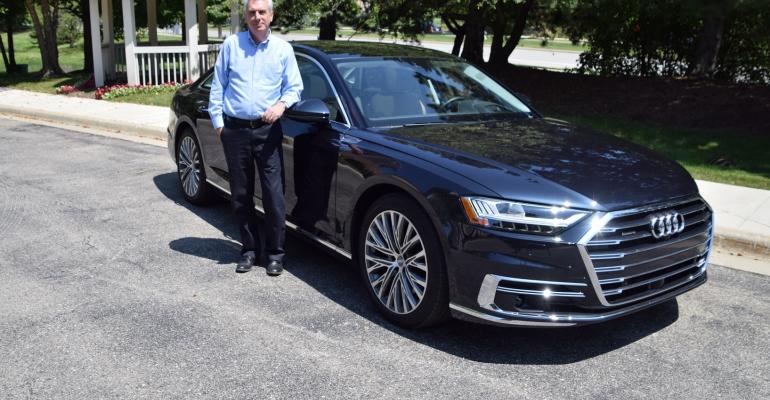 Road to MBS: With Audi A8, L Is for Limousine

The A8 L’s spaciousness, amenities and smooth-operating advanced driver-assistance systems make for a relaxing Detroit-Traverse City run to MBS.

TRAVERSE CITY, MI – I limo’d from suburban Detroit to the Management Briefing Seminars here. At least that’s what it felt like in the Audi A8 L, the long-wheelbase version of the German luxury automaker’s flagship sedan.

The $101,095 edition (including $17,000 in options) I drove is lathered in luxury, from its Alcantara headliner to Valcona Leather seats that massage in a variety of ways to the superb, 23-speaker Bang & Olufsen sound system and host of advanced driving features. All that made the 4-hour, 233-mile (375-km) trip go by quickly and effortlessly.

Off the freeway, its 48V stop/start system shuts down the engine at traffic lights and construction backups, working smoothly though not entirely imperceptibly.

Speaking of the adaptive cruise, the system in the A8 works about as well as any I’ve tested. It regulates the speed expertly, even as other vehicles cut in and out of the lane ahead. There were no panic-braking moments, and when room opened ahead, the Audi accelerated gradually, the way a human driver would, not all pedal to the metal.

Lane-keeping works well enough too, but the car could do a better job of centering itself. There was some pinballing from stripe to stripe, though with a footprint this large, the A8 doesn’t have a lot of room to travel. Still, it’s difficult to completely trust the system when another car is approaching from behind in the adjacent lane.

The controls for the ACC are a little awkward too, positioned on a stalk behind the steering wheel. That requires some concentration to set, resume and change speeds, but I warmed up to it as the trip went on. 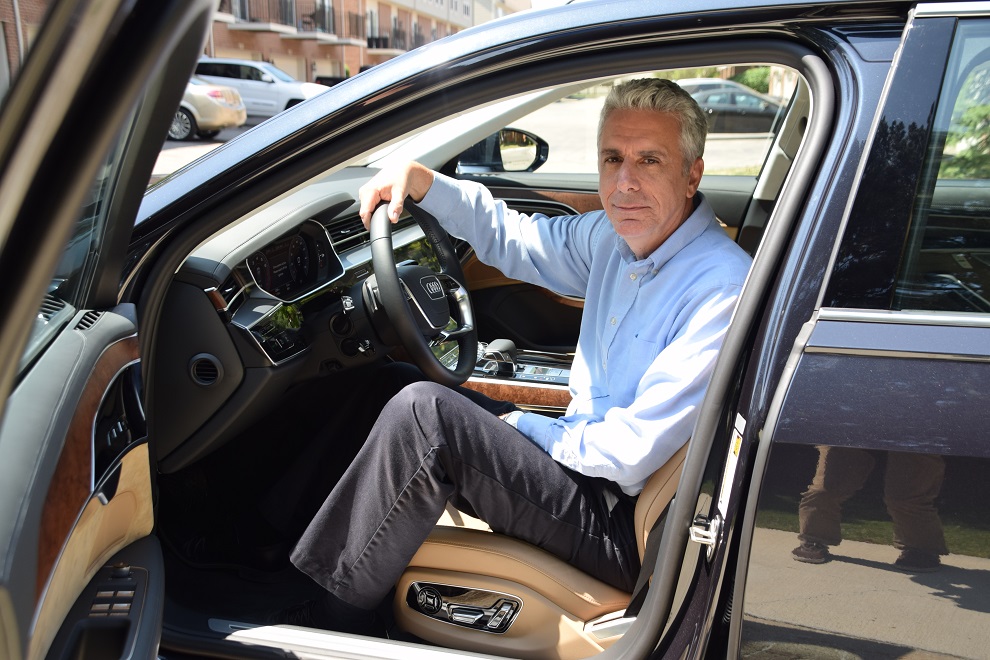 Zoia impressed with A8 creature comforts.

The ACC system makes sure there’s no mistaking its abilities for full auto pilot. It constantly monitored my driving, making sure my head was up, eyes on the road and hands on the wheel when it was engaged.

When I was working the pedals, the Virtual Pilot display warned me if I was getting too close to the car ahead and reminded me of the speed limits, even through temporary reduced-speed construction zones.

The driver-assistance systems are a big component of the Wards 10 Best UX competition now under way. The A8 is one of about 25 nominated vehicles. Winners will be announced next month.

Audi’s big move with its entire lineup has been the switch from console-mounted controller to touchscreen operation for its multi-media interface. While I’m a big proponent of the old dial, the new interface is arguably the best touchscreen out there, and it doesn’t take long to get accustomed to it.

The system is split into two, with the lower screen providing a series of quick-access “favorites” buttons and climate controls.

The larger, 10.3-in. (26-cm) upper screen covers most other functions, including the sound system, navigation and access to apps. Its design is simple and intuitive; buttons are big and easy to stab, even when the car is in motion. The haptic feedback you get when pressing one of them further assures you’ve hit the right mark. 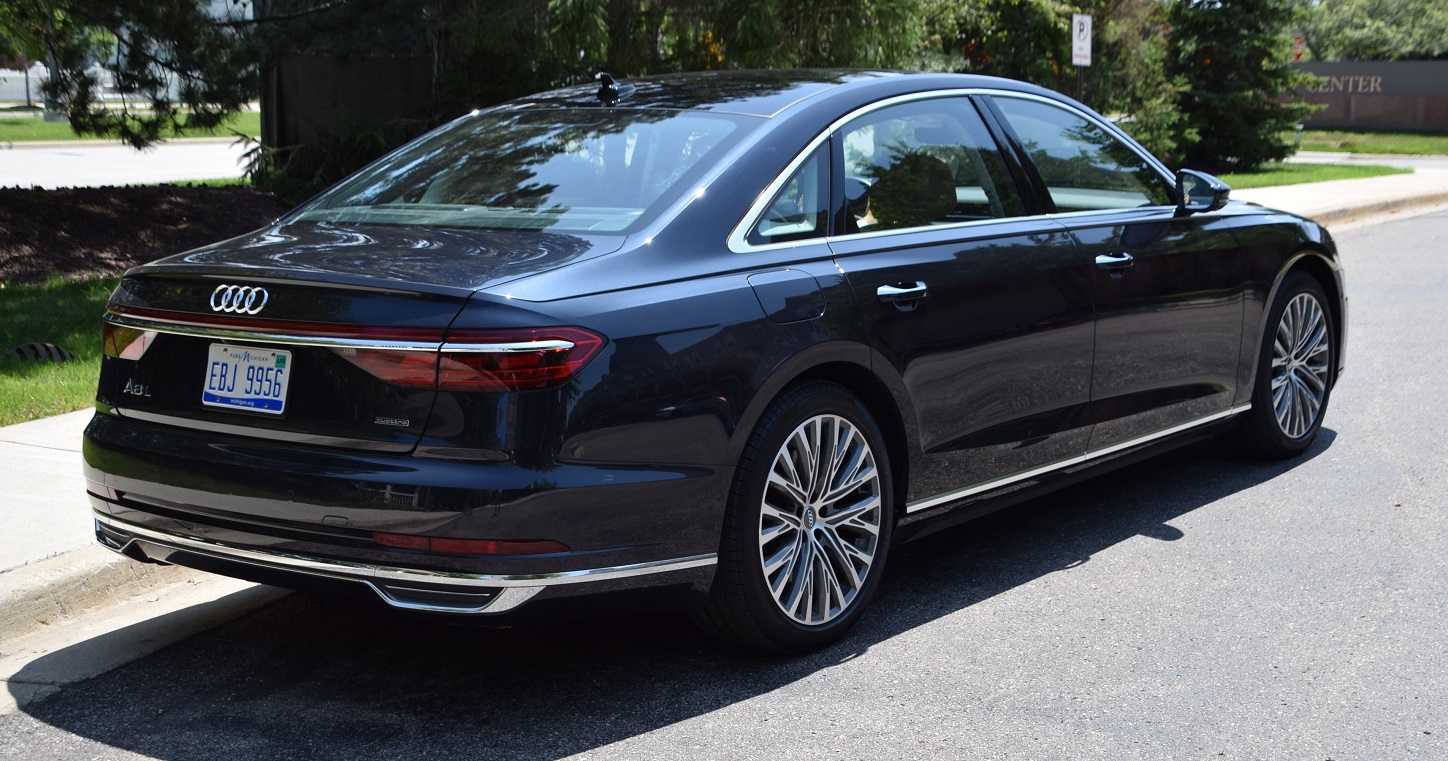 The display is complemented by Audi’s second-generation 12.3-in. (31-cm) Virtual Cockpit digital gauge package that offers various instrumentation views, including a generous display of navigation mapping. There’s also a heads-up display that helps keep your eyes on the road.

Another way to maintain your focus is to avoid the touchscreen altogether and use Audi’s excellent natural-speech voice-command system. It easily found the correct route when I asked it to “take me to the Grand Traverse Resort,” and it accurately changed radio stations and adjusted cabin temperature to my liking.

There are a couple things I couldn’t quite figure out and will have to keep working on this week. One is getting the wireless Apple CarPlay to connect with my phone. The other is to determine whether and how I might choose different “favorites” buttons to appear on the lower screen.

Did I mention the A8 L is roomy? Its trunk easily swallowed up my airline-size carry-on suitcase. On arrival, I had trouble fishing my laptop bag out of the cavernous rear compartment, which offers the best seats in the house.

Providing more legroom than the business-class section on a trans-Atlantic flight, the rear seats recline and massage. There are retractable shades to block out the sun and full remote control of the audio, lighting and climate systems.

I can’t remember ever arriving after a four-hour drive feeling as relaxed and fresh as this one. The only way to top it on the way home would be for someone else to do the driving. Then I could stretch out in the back.