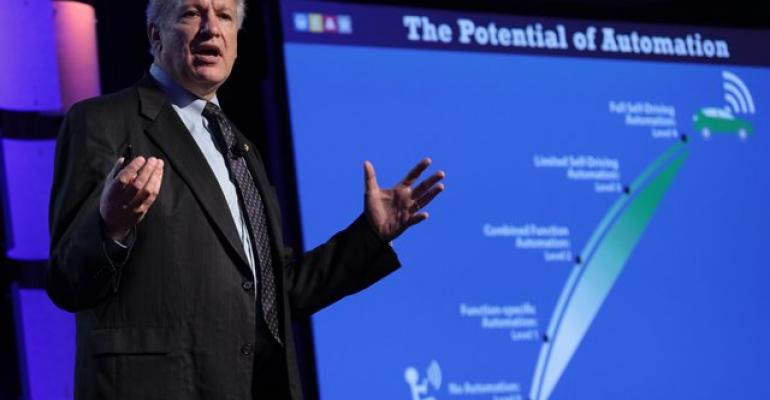 TRAVERSE CITY, MI – NHTSA Administrator Mark Rosekind says the agency wants to work more closely with the EPA and California Air Resources Board to harmonize fuel-economy and tailpipe-emissions rules, a growing bone of contention among automakers weary of answering to three regulatory masters.

“We are working at that,” Rosekind tells the CAR Management Briefing Seminars here. “It would benefit everybody. We really believe in harmonization.”

“When the companies embraced CAFE, we did so because we felt it served a public purpose,” he told the annual industry confab. “But (rules) are not harmonized.”

Automakers must bring their fleets to an anticipated average 54.5 mpg (4.3 L/100 km) by 2025 to meet the NHTSA mandate, while the EPA has set a carbon-dioxide emissions target of 163 g/mile in the same timeframe. California leads a group of states demanding zero-emissions vehicles account for 15% of sales also by 2025.

Rosekind says he recognizes the regulatory patchwork and suggests old-fashioned bureaucracy is one culprit. NHTSA, he says, does not want to give up its responsibility for setting fuel-economy standards, while Congress hands down the statutes for regulators to wrestle harmonizing.

“The challenge is when we get things that other people we don’t have control over tell us to do in a certain way,” Rosekind says. “We’re hoping from 2016 forward we can find more ways to (harmonize). There are discussions going on to figure that out.”

Rosekind also leaves the door open for automakers to voluntarily install alcohol-detection devices in vehicles to increase safety and reduce traffic fatalities. But he stops short of putting it entirely in the laps of automakers, saying there needs to be a balance between technology and personal responsibility.

Regarding soaring fatality rates, which jumped 7.7% last year according to NHTSA, Rosekind says the agency is a bit flummoxed.

“We are still figuring out what the causes are,” he says, citing a rise in miles traveled due to low fuel prices as one possible reason.