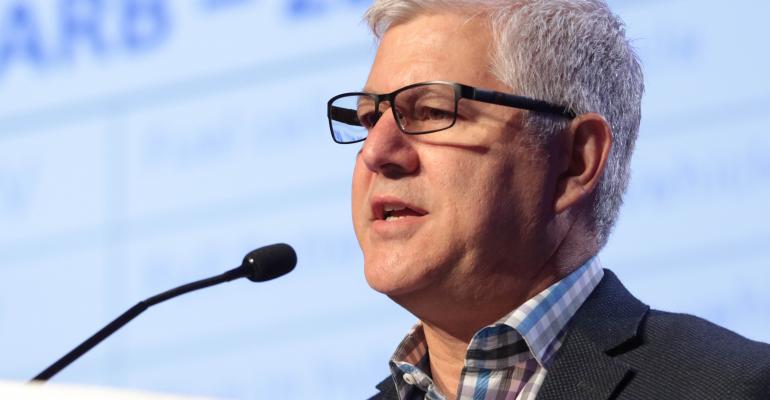 Battery-technology studies, including those by the Department of Energy, show PHEVs could have a range of 100 miles by 2050, Honda says. The Chevy Volt currently has an all-electric range of 52 miles, and others have ranges of about 20 miles.

TRAVERSE CITY, MI – As the midterm review of CAFE regulations leading up to 2025 begins, automakers are weighing in with suggestions for making the legislation less costly to consumers in an era when cheap fuel is changing buyer attitudes and behavior.

A Honda executive tells attendees at the CAR Management Briefing Seminars the automaker supports aggressive regulatory targets to improve vehicle efficiency 4% annually. However, Robert Bienenfeld says plug-in hybrid-electric vehicles are being given short shrift by some regulators planning fuel-economy and emissions rules all the way to 2050.

The EPA and NHTSA are creating one set with a technology-neutral approach with clear social goals for decreasing petroleum consumption and reducing greenhouse-gas emissions at the lowest possible cost to consumers, while the California Air Resources Board is developing another set with a zero-emissions mandate that would be addressed by technology favorites such as battery-electric and hydrogen-fuel-cell vehicles.

Less-expensive technologies such as PHEVs are treated like second-class citizens in CARB’s regulations, Bienenfeld says. “The real problem is that some of the ZEV goals wreak havoc with cost goals.”

The ZEV rule as now written will add about $356 per U.S. car sold in 2025, Bienenfeld says, and the amount of carbon emissions it reduces will come at a very high cost to some automakers.

“It is an enormous burden, and the burden is not shared equally. It falls most heavily on automakers that sell a lot of cars in ZEV states (which includes California and nine other states).” Honda is one of those companies, and it would end up shouldering double the burden of most other automakers, he says.

PHEVs deliberately are being undervalued in some of the new legislation by being allocated fewer incentives than technologies more favored by regulators.

And the rationale behind undervaluing PHEVs is based on CARB’s extremely optimistic forecasts for the electric technologies it prefers, lowballing potential PHEV advancements out to 2050 and not paying close attention to utilization studies showing the majority of vehicle miles traveled by most drivers are relatively short trips that could be achieved under electric power with a PHEV.

Battery-technology studies, including those by the Department of Energy, show PHEVs could achieve a range of 100 miles (161 km) by 2050, Bienenfeld says. The Chevrolet Volt currently has an all-electric range of 52 miles (84 km), and others have ranges of about 20 miles (32 km).

High-volume sales of such PHEVs would result in hitting 2050 targets for fuel efficiency and CO2 emissions at far less cost to consumers, Bienenfeld says.

He’s not promising it will happen exactly that way in 2050, but he argues that in 2016, the regulatory incentives should be neutral enough to consider PHEVs on an equal footing with fuel cells and BEVs.

“They have so many fewer compromises, less infrastructure requirements, and we think there is great potential there.”

The midterm evaluation of the proposed 2025 rules has arrived, and Bienenfeld is making his case. He is hopeful regulators will listen.

Most Disruptive Powertrain Gets Even Better
Feb 22, 2016