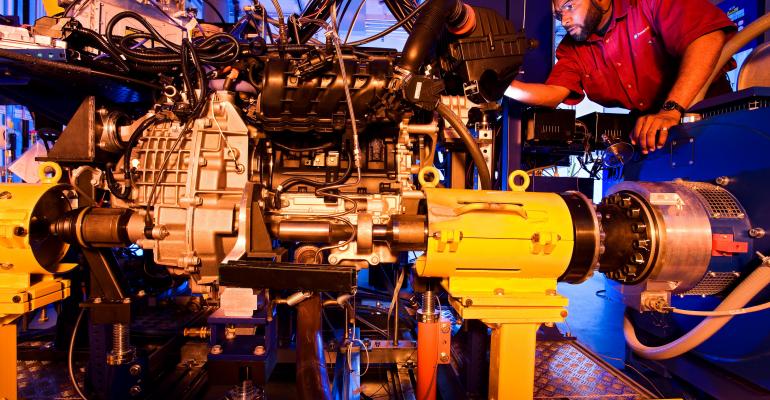 Pontiac Getting New Rig – And Days Off

Job security can be elusive in the auto industry, but a team of crack technicians and engineers running engine durability labs at the General Motors Powertrain technical center in Pontiac, MI, may have found it.

They haven’t had a day off since last Christmas and are about to enjoy a 4-day respite this Thanksgiving.

An enormous amount of physical and computer-simulated validation and testing is required to prove out an engine before it goes under the hood of a production vehicle.

The GM tech center test labs, like others operated by auto makers around the world, run 24 hours a day seven days a week because they can and because engines are enormously complex machines that must be tortured non-stop to see if anything snaps, hisses, ruptures, explodes or flat-out fails because a component couldn’t handle extreme heat or cold or extended runs at wide-open throttle.

GM welcomed journalists into this high-security world recently during the unveiling of the all-new fifth-generation LT1 small-block V-8, which will debut on the ’14 Chevrolet Corvette.

It’s here that GM patented a dynamic tilt test rig 12 years ago when the auto maker was validating the engine that would power the fifth-generation Corvette.

The large metal stand functions like a gyroscope, cradling a fully dressed engine like a hand would hold a baseball, then rotating it every which way, only with a lot more force, up to 1.3g, to simulate the extreme cornering and elevation changes a Corvette may endure on the racetrack and ensure oil is circulating properly.

Oh, and the engine is running all the while, often at the redline. To watch this robotic test rig in action is nothing short of remarkable as a hunk of metal weighing several hundred pounds does its business while being batted around like a ping-pong ball.

Never mind the huge pliable braided stainless-steel exhaust pipe smacking on the cement or the dozens of wires protruding wildly from the engine, like a head on a bad hair day.

All those wires are connected to sensors embedded within the engine to gather vital information the technicians tabulate and share with the powertrain team.

GM even lets out a bit of news during the tour: The facility has had only one of these dynamic tilt stands for more than a decade, but a second one is coming to Pontiac. Dave Mooty, who manages the Powertrain Engineering Development Center, says the new unit is long overdue but will be operational within six months.

He isn’t saying, however, whether the new testing equipment will be the same size or dedicated to conventional engines, electric vehicles, hybrids or alternative-fuel powertrains.

High-speed computers enable levels of testing and validation that were unimaginable 20 years ago. Back then, technicians with archaic computers gathered one bit of information (for instance, oil pressure) every 5 seconds. Today, these advanced systems capture 100 bits of data per second.

The process is much more automated, too. Two decades ago, operators sat up all night, charting numbers in spreadsheets. Three shifts ensured 24/7 tabulation. Today, information is gathered automatically, allowing operators to perform other functions.

And old-school evaluation methods are fading into memory for the 100 or so engineers and technicians who work here.

Engines are calibrated now with the help of as many as 60 sensors to track key operating parameters and listen for unseemly sounds such as spark knock. Twenty years ago, technicians crimped a hollow piece of copper tubing and screwed it directly to the engine block to listen for knock.

Engine tests that used to take two weeks now can be performed within three days.

Dean Guard, GM’s executive director-North America Engine Programs, says the new LT1 V-8 “is a reflection of our Engineering Development Center’s capabilities and the determination of the engineers working there to deliver the absolute best in the industry. We’ve significantly reduced both the cost and time to develop our next-generation products.”

Given the rapid pace of powertrain evolution to meet corporate average fuel economy requirements of 35.5 mpg (6.6 L/100 km) by 2016 – and even stricter mandates further in the future – durability labs such as those in Pontiac can plan on plenty of activity.

And although the center will close this Thanksgiving, it will continue operating 24 hours a day through the Christmas holidays, Mooty says.

So enjoy a drumstick and give thanks for a little job security.