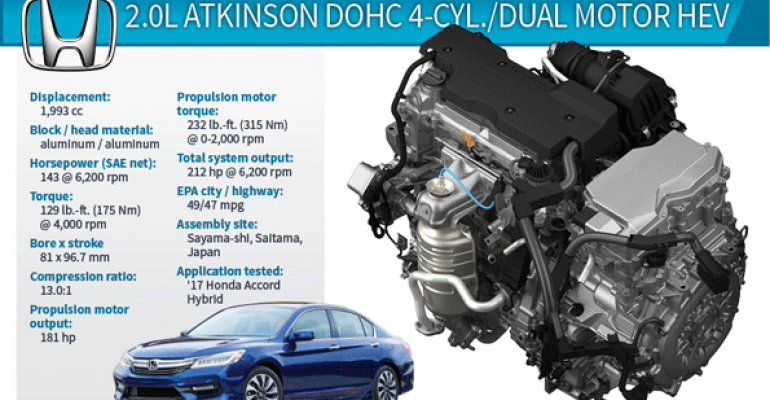 The &rsquo;17 Accord Hybrid touts impressive fuel-economy of 49/47 mpg city/highway. Not bad for a spacious, upscale 5-passenger sedan that&rsquo;s closer to large than midsize. &nbsp;

Despite beating arch-rival Toyota to the U.S. market with the industry’s first hybrid-electric vehicle in 1999, Honda’s eco-friendly HEVs never have enjoyed the popularity of Toyota’s iconic Prius models.

Even so, Honda has developed noteworthy HEV powertrains over the years, and its best to date was named to the 2017 Wards 10 Best Engines list last year.

Eliminating the need for a conventional transmission, this new system seamlessly transitions between three operating modes: EV Drive (short distances under light loads with the engine off); Hybrid Drive (series hybrid mode with the propulsion motor driving the front wheels while the engine powers the second motor/generator to supplement electrical current from the 1.3-kWh lithium-ion battery pack); and Engine Drive (engine power only with a lock-up clutch connecting the engine and propulsion motor for medium- to high-speed cruising). A new Power mode adds battery assist for a performance boost on demand, and its smaller, lighter components increase cargo capacity while enhancing performance and efficiency.

Naritomo Higuchi, Honda Motor Co. chief engineer and lead for powertrain, told us earlier this year the Accord Hybrid powertrain team’s primary design priority was “to achieve the world’s highest efficiency among midsize sedans, while maintaining the joy and freedom of mobility.” He adds that their targets for each component were challenging, and that achieving all of them was critical to success.

“The high-voltage units, including the two motors and inverters, require not only superior efficiency but also small enough size to fit in the standard engine space,” he says. “And while the engine already had top-class efficiency, we further improved it with new technologies such as electric VTC, cooled EGR, an electric water pump and high-tumble inlet ports.”

“We had several trade-off issues between these necessities and efficiency enhancement,” he says. “This system switches between three driving modes – EV, Hybrid and Engine Drive – to maximize efficiency.” If only efficiency were considered, these transitions would be accompanied by unacceptable noise and vibration due to engine start during EV Drive and clutch engagement during transition to Engine Drive, Higuchi says.

“The additional system components – two motors, inverters, high-voltage battery and several control units – also required advanced reliability testing compared with a conventional vehicle because when the number of components is increased, system reliability may be reduced because an overall value is determined by multiplication of individual values.”

Editor Dave Zoia pays it the highest compliment of all: “You could drive this and not know it’s a hybrid,” he says. “It’s a very normal drive experience, representing the best balance of performance and fuel economy.”

Higuchi claims the Accord Hybrid’s i-MMD two-motor system with its engine direct-drive clutch is an industry first, and that plug-in capability can be added to it fairly easily. Among its Honda firsts are an efficiency enhancing exhaust heat recovery system and a new high-voltage motor structure with a divided conductor stator that improves manufacturability.

But the powertrain’s primary competitive advantage is its unique power split, Higuchi says.

“Both Honda’s dual-motor system and competitive systems divide engine output into mechanical and electric paths to the drivetrain,” he says. “But while competitive systems always mix the two power transmission paths, ours completely switches them dependent on total efficiency.

“While the basic structure of our system is based on what’s known as a series hybrid, the most significant difference is the direct-drive clutch that physically engages the engine and driveshaft. If engine efficiency is greater than electric transfer, the vehicle can be propelled by engine power by engaging this clutch. And even in engine drive mode, the two motors assist regeneration to enhance overall efficiency.”

In Hybrid Drive mode, propulsion power is provided by the traction motor driven by on-demand-generated electricity as much as possible to minimize the size, weight and cost of the battery pack. “Outstanding overall system efficiency was achieved due to higher electric transmission ratio and drastic efficiency improvement of each component, including thermal efficiency of the engine,” Higuchi says.

Even so, there still is room for improvement in the future, he says.

“From a usability point of view, expansion of the utility space by miniaturization of the high voltage battery is one of the highest priorities for future development. And, as we demonstrated with the ’14 Accord Plug-in Hybrid, this system’s basic configuration can be used for a plug-in hybrid system, which will be the mainstream of powertrains in the near future, by installing external charging systems and a larger battery. Component and efficiency enhancement technologies of this system will be the platform for future electrification.”

Honda has another hybrid on the way, based on the all-new ’18 Accord, using an updated version of the 2-motor hybrid powertrain. But the vehicle goes on sale next year and won’t be available for 10 Best Engines testing this fall.