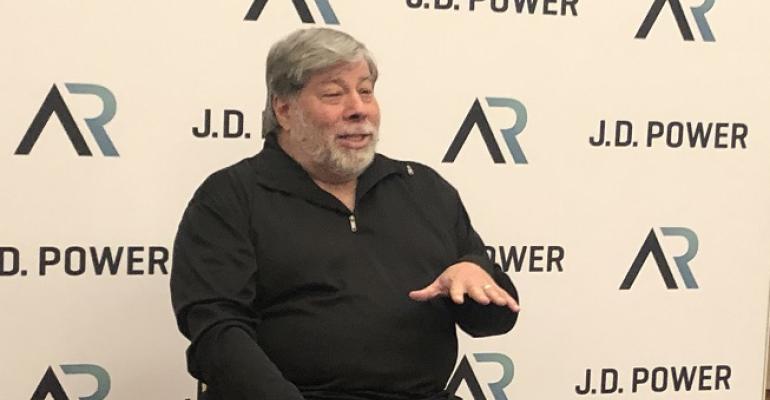 Apple co-founder Steve Wozniak backs off from his original prediction of how soon autonomous vehicles will rule the roads.

Steve Wozniak, an Apple co-founder and a volunteer teacher for many years, offers this advice, especially to young people of the near future: Go to driving school.

He says that because he has changed his thinking about how soon autonomous vehicles will make the scene in a big way. He, and many others, are dialing back from when they thought self-drivers would be ready for prime time.

Of predictions that self-driving cars were soon to hit the roads en masse, he now says, “I had totally bought into it a couple of years ago. But I gave up that thinking. I’ve stepped way back.”

Why? Because level 5 of autonomous vehicles – where the car drives itself, anywhere and under any circumstances with no human involvement – requires amazingly complicated technology.

There are just too many variables, Wozniak says at J.D. Power’s Automotive Revolution, an inaugural conference centering on the future of the auto industry.

“Nothing is ever predicable enough where you can’t have a person potentially jump in and take charge,” he says of the possibility that an autonomous vehicle fails to fully do its job.

“I don’t see reaching level five in my lifetime,” says Wozniak, a computer scientist who started Apple with Steve Jobs, the legendary master marketer. “You’ve always got to be ready to take over. And you know what that means? You’ve got to learn how to drive.”

At the conference, cited accidents involving vehicles with some form of self-driving capability include a Tesla that slammed into a police car, a Tesla that hit a truck and an Uber test autonomous vehicle that fatally injured a pedestrian in Arizona.

“Tesla has showed how many mistakes it can make that the dumbest driver wouldn’t,” says Wozniak, known as “The Woz” in Silicon Valley circles. He’s a native of that now-famous California area.

His vehicle ownership includes a big Hummer SUV that he bought years ago but basically sits in his garage. He also owns two electric vehicles that get a lot of yeoman use: A Tesla and a Chevy Bolt.

Because of its range and the Tesla recharging infrastructure, he takes the Tesla on long driving trips.

“Tesla has superchargers placed strategically across the U.S.,” he says. “The charging and the EVs themselves are equally important. Some people would say the chargers are more important. Of Tesla’s first six superchargers, five of them were between (Tesla founder) Elon Musk’s home and the Tesla factory” in California.

He says he has a “love-hate” relationship with its Tesla. The hate part comes from being “fooled too many times” by the company’s claims of its vehicles’ semi-autonomous functionality. Plus, “I wish the air conditioner worked (better). It takes 10 minutes to defog the windshield. But I still like Tesla.”

The Bolt is his daily driver. It lacks the “will-do-it-for-you” semi-autonomy but we still like it,” Wozniak says. “And it has a nice audio system.”

While there is much talk about automotive applications of artificial intelligence, Wozniak says the term often is misunderstood to be more than it is.

The idea that AI can someday replicate the complexity of the human brain is overreaching. “We’d be totally fooling ourselves. (We’ve) figured out how to build a brain – it takes nine months. We’ve misled the public into thinking a car could think and act like a human.”

He describes AI as “the high end of computers; it’s the best they can do.”

In the future, more than anything automotive, he looks forward to vehicles getting safer though not necessarily ruling the roads on their own. He adds: “I want my car to learn my (driving) behavior.”