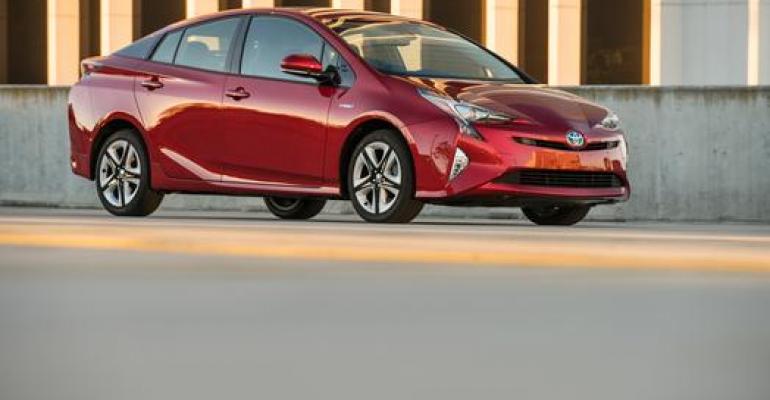 DETROIT – With Tesla and the push to battery-electric vehicles by automakers heavily in the news, Toyota Motor North America CEO Jim Lentz worries the industry has put the cart before the horse.

“(Tesla CEO Elon Musk) has excited a lot of people about (battery) EVs,” Lentz tells the crowd here at the 2019 Automotive News World Congress. “I worry a little bit we are over-stimulated in our belief that (battery) EVs are going to take over the world quickly. Today, if you look at just alternative(-powertrain) vehicles (hybrid, plug-in hybrid, BEV- or fuel-cell) there are 94 nameplates out there. And they sold about 600,000 (units) last year. But only seven sold more than 2,000 a month.”

Wards Intelligence data shows of the 17.215 million light vehicles sold in the U.S. in 2018, 16.042 million of them had just a traditional gasoline-powered internal-combustion engine. Another 496,000 had diesel engines in 2018, leaving 677,000 alternative-powertrain models sold.

“There’s not much growth in that industry,” Lentz says. “It’s going to be a battle (for share). The question is how are we going to be able to afford to get the share, because right now cost and range anxiety is still an issue for customers. And gas at $1.69 a gallon isn’t going to make things much easier.”

Lentz says he paid that low price for fuel in Texas, where TMNA is headquartered. Texas is one of the cheapest states to buy fuel right now, per AAA. The national average price for a gallon of regular unleaded was $2.42 on Jan. 16, although that’s well off the $4-per-gallon prices seen across the nation a decade ago.

The Toyota chief goes on to say the big worry among automakers is “how many dollars should I be investing today” to be prepared for the future, which promises not only electrified powertrains, but also autonomous and connected vehicles that may or may not be part of mobility-as-a-service fleets.

“No one wants to be left behind, but if I don’t invest enough today to take care of today’s business, I may not have a future,” he says.

When asked if Tesla is hurting Toyota’s luxury Lexus brand, Lentz says no, pointing to data showing 70% of Tesla buyers only consider vehicles from the Tesla brand.

“(Musk) is creating an entirely new segment of vehicles,” he says. “And by that, I don’t view Tesla products as luxury products. Those of us who only separate the world between luxury and non-luxury, we’re missing the point. Tesla has created this new category of a technology-driven product.”

However, Lentz says Tesla is having a negative impact on sales of Toyota’s Prius lineup, as many of the hybrid’s owners are trading it in for a Tesla. Prius sales, not including the subcompact Prius C, fell 17.7% in 2018 to 79,171 units. Toyota used to sell more than 150,000 units annually of the Prius in the U.S.

Lentz believes “short of regulation,” the acceptance rate of BEVs will continue to be low. Nevertheless, Toyota has announced plans to introduce 10 BEVs globally in the early 2020s.

He also says regulation may be the only driver of hydrogen fuel cells, which the No.1 Japanese automaker is a keen proponent of. “It’s going to be difficult for us to continue to push” fuel cells as “it’s difficult to see if and when we’re ever going to reach peak oil.”

Lentz says Toyota trying to create a business case around FC passenger cars, such as the current Toyota Mirai, was “maybe not the best place to start.” The automaker now is focusing on fuel-cell heavy-duty trucks, including via a demonstration project at the Ports of Long Beach and Los Angeles in Southern California in partnership with Kenworth and Shell.

Meanwhile, Lentz, in a wide-ranging conversation, says he expects cars to settle at 30% market share in the U.S., after years of declines as Americans flocked to light trucks; confirms there will be a new-generation Sienna, despite the decline of the minivan segment in the U.S.; says sales of the Tundra fullsize pickup should improve when Toyota opens its Tacoma midsize pickup plant in Guanajuato, Mexico, (Tundra and Tacoma currently share a line at Toyota’s San Antonio plant); and reveals Toyota potentially could assemble vehicles on Mazda’s production line at the two automakers’ new joint vehicle-assembly plant in Huntsville, AL. Toyota plans on building the Corolla at the plant, while Mazda has said it will assemble a new CUV.

LMC-Wards forecast data shows Mazda will build a new-generation CX-7 at the plant and Toyota will assemble a derivative of that vehicle beginning in 2022.