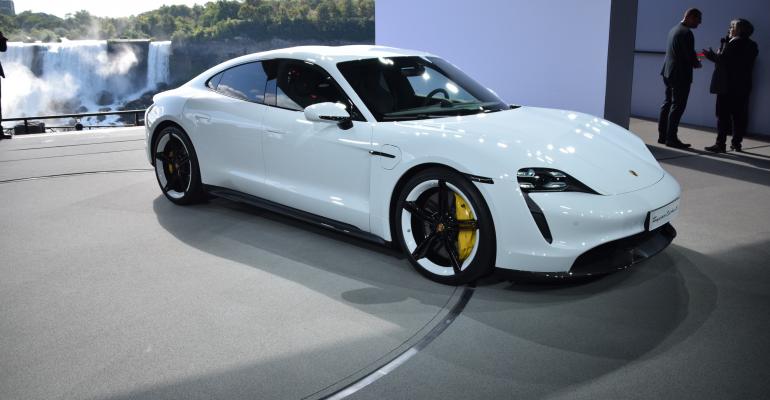 Available first in the U.S. by year’s end, the Taycan is the world’s first 800V battery-electric vehicle and represents Porsche’s bid to take EVs into high-performance realms, capable of 161 mph and likely priced below $200,000.

NIAGARA FALLS, Canada – Porsche takes a monumental step with its heralded brand by unveiling the Taycan, an all-wheel-drive battery-electric 4-door sport sedan generating up to 750 hp and able to sprint to 60 mph (97 km/h) in 2.6 seconds, with a top speed of 161 mph (259 km/h).

It is the first production Porsche launched without an internal combustion engine and the first electric vehicle using an 800V architecture at a time when the industry standard is 400V.

The 800V system reduces weight and improves packaging and allows the Taycan to reach 80% state of charge (from 5%) in 22.5 minutes with a dedicated fast charger. Peak charging power for the 93.4 kWh lithium-ion battery is up to 270 kW.

“Whether we like it or not, Porsche’s future is electric,” Klaus Zellmer, president and CEO of Porsche Cars North America, says during the dramatic unveiling here today in a temporary building constructed on the rocky bluff overlooking Niagara Falls, an unparalleled source of hydroelectric power.

Shortly after the gleaming white Taycan Turbo S rolled on stage in the darkened building before hundreds of journalists, two enormous doors swung open behind the car, revealing a spectacular view of the falls.

It was a simultaneous media unveiling coordinated with two other continents: a solar farm in Berlin and a wind farm in Pingtan in China’s Fujian province.

The vehicle name is pronounced (TIE-CON), a Turkish translation for a spirited horse. Even though the vehicle drivetrain does not use a turbocharger, Porsche is using the names “Turbo” and “Turbo S” as an extension of the brand’s other models and history.

Porsche’s electric future, which is costing the company more than $7.3 billion (€6.6 billion) by 2022, will include a less powerful (and less expensive) off-road friendly Taycan Cross Turismo at the end of next year, followed by an all-electric version of the Macan CUV. 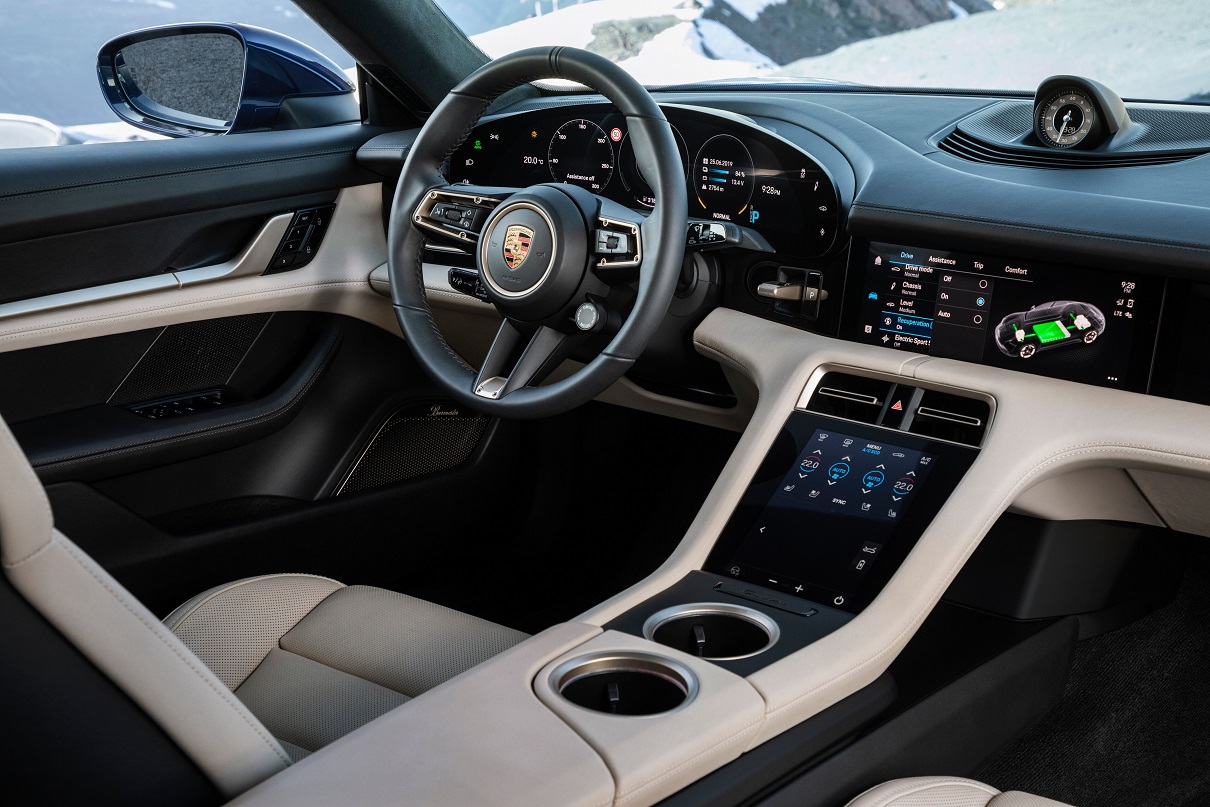 The Taycan (interior pictured above) springs from Porsche’s all-new J1 EV platform, while the Macan EV will be separate from the conventionally powered Macan and will come from an all-new PPE (Premium Platform Electric) architecture co-developed with Audi.

Before Taycan came along, Porsche’s electrified vehicle offerings have been plug-in hybrid versions of the Panamera sedan and Cayenne SUV.

Several years ago, Porsche launched the 918 Spyder, a high-performance 2-seat sports car with a hybrid-electric powertrain and priced up to $1 million. The automaker produced only 918 units, and they sold out in two weeks.

The Taycan places an electric motor on the rear axle and another on the front, with torque channeled to the wheels with a 2-speed transmission developed and assembled by Porsche. Rear-wheel steering is optional to enhance handling.

For Taycan assembly, Porsche has expanded its Zuffenhausen plant outside of Stuttgart where the 911 and 718 Boxster and Cayman are produced. The Taycan will run on a separate line with capacity for 20,000 vehicles annually. The Taycan has a dedicated body and paint shop.

A Porsche source says the automaker might be able to deliver by year’s end 500 units to the U.S., the first market to receive the Taycan. The U.S. is Porsche’s largest market, particularly California.

Customers buying a Taycan will have access to free charging for three years.

Porsche and its Volkswagen and Audi corporate siblings are connected with Electrify America, which is planning about 800 charging stations across the U.S. with about 3,000 DC fast chargers by the end of 2021. Currently, Electify America has 484 charging stations installed or under development with over 2,000 individual chargers.

There are no Electrify America chargers at Porsche dealerships yet. 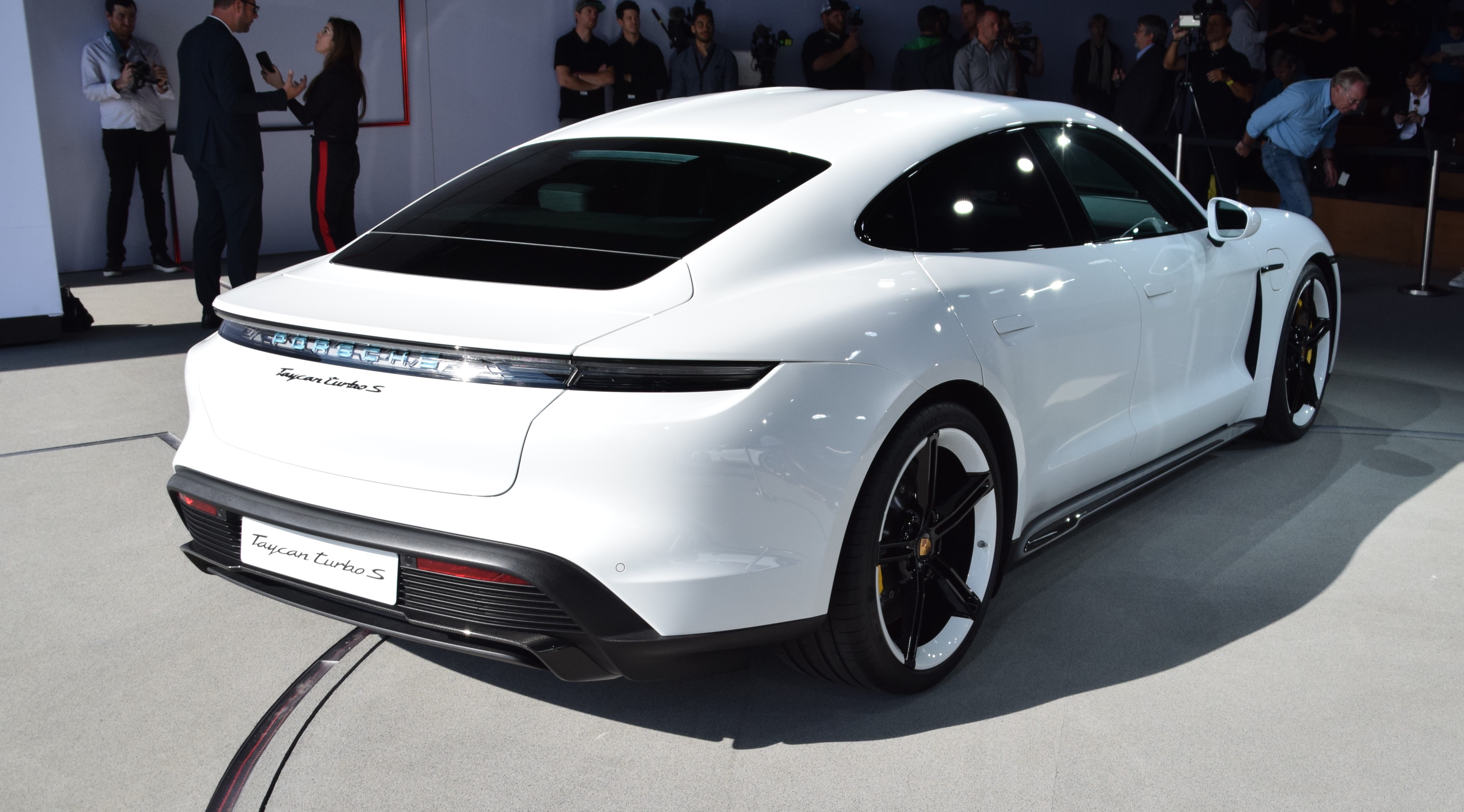