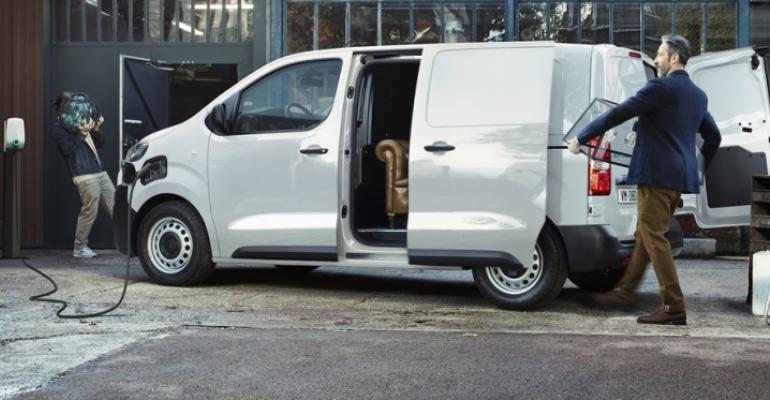 The Peugeot e-Expert, Citroen e-Jumpy and Opel Vivaro-e will be offered with two types of batteries, 50 and 75 kWh, that offer ranges of 142 miles to 205 miles, respectively. PSA also is looking into hydrogen fuel-cell technology.

MADRID – French automaker PSA, which manufactures the Peugeot, Citroen, DS, Opel and Vauxhall brands, aims to have a full range of electric-powered light-commercial vehicles by 2021.

PSA estimates 70% of buyers will seek to alleviate range anxiety by opting for the longer-range models, despite research showing 80% of users travel less than 124 miles (200 km) a day.

The height of the vehicles will be 75 ins. (1,900 mm) to allow access to underground parking – something that, according to PSA, users of these vehicles do an average three times per week.

Orders for the electric LCVs will be taken starting this month, with deliveries in the fall.

In September, orders will be taken for the passenger versions of the LCVs – the Peugeot e-Traveler, Citroen e-SpaceTourer and Opel Zafira e-Life – with first deliveries expected later this year.

Besides battery-electrics, PSA is looking into hydrogen fuel-cell technology but has ruled out hybrids, says Xavier Peugeot, senior vice president-LCV.

“We are going to continue working on this solution, as fuel-cell technology has great advantages over batteries, such as greater range and a much shorter recharge time, although it has the counterpart of being much more expensive,” he says during the media presentation of the battery-electric LCVs.

PSA in November will begin producing the first prototypes of electric versions of the K9, the automaker’s smallest LCV, at its plant in Vigo in northwest Spain. It will join the Peugeot Partner, Citroën Berlingo and Opel Combo as well as a version built for Toyota called the ProAce City.

Concern has increased among Vigo workers that a European Commission investigation into the pending merger between PSA and Fiat Chrysler Automobiles may find the automakers forming a monopoly in the LCV segment.