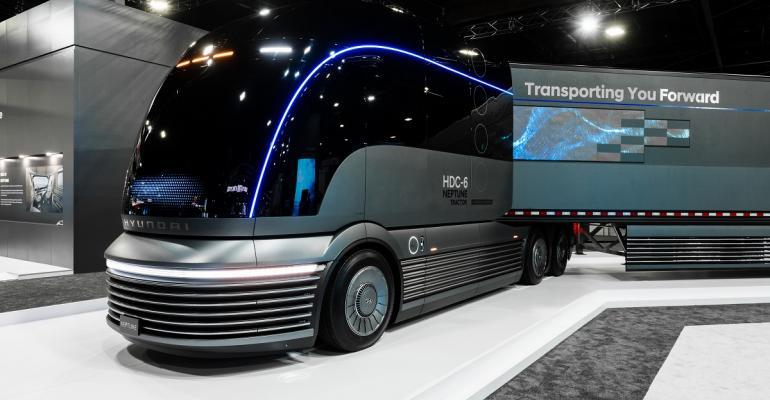 For U.S. market, Hyundai says Neptune concept tractor would have space for eight hydrogen tanks and range of 800 miles.
Vehicles>Powertrain

“You have to consider it logically,” Kim said at the Hyundai press conference here. “If you see all of the constraints and boundary conditions, you’ll come to the conclusion that we need hydrogen fuel cells in commercial vehicles.”

The tractor-trailer combination provides a window into the future of transportation in the U.S. and around the world, and the concepts add product detail to the company’s Fuel Cell Electric Vehicle 2030 Vision for widespread deployment of hydrogen-powered fuel-cell technology, a team of Hyundai CV representatives explained.

The HDC-6 Neptune envisions the future of the Class 8 truck in design, in-cab technology (see interior photo below) and propulsion system. The concept also introduces Hyundai commercial vehicles to the U.S. market. While Hyundai’s commercial offerings are well-known elsewhere, the global vehicle supplier notes this is the first time they have been shown in the U.S.

“By showing HDC-6 Neptune, the first hydrogen-only concept for HMC’s commercial vehicles, we will start exploring opportunities in the United States commercial vehicle market,” said Edward Lee, head of Hyundai CV business division. “Furthermore, we are willing to work with other partners to pave the way to establish a hydrogen ecosystem for CV.” 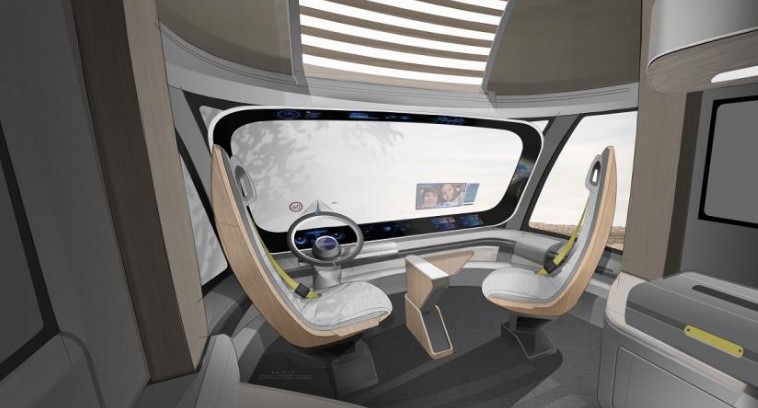 The Neptune concept is not to be confused with “the maturity level” of HMC’s fuel-cell products already on the road in Asia and in Europe, emphasized Maik Ziegler, CV R&D strategy group head.

“You may have seen a lot of prototype fuel-cell trucks at different shows,” Ziegler said. “But let me explain to you the big difference between a show truck and a real working tool.”

He then detailed the development of the first series production of a heavy-duty long-haul FC truck worldwide.

Hyundai Hydrogen Mobility, a joint venture between HMC and Switzerland’s H2 Energy, plans to deliver 1,600 fuel-cell electric heavy-duty trucks by 2023, marking the entry of the automaker into Europe’s clean mobility commercial vehicle sector. The U.S. market is an important next phase of the company’s FCEV 2020 vision.

It delivers a single-fueling travel range of about 249 miles (400 km) with a fully loaded trailer. It carries seven large hydrogen tanks with a storage capacity of almost 77 lbs. (35 kg) of hydrogen.

The gross combined vehicle weight is 34 tons (30,844 kg). Production is underway and the first trucks will be handed over to customers in early 2020, Ziegler added.

Hyundai Hydrogen Mobility also has partnered with Hydrospider, a joint venture of H2Energy, Alpiq and Linde, to promote a green hydrogen ecosystem and refueling infrastructure in Switzerland and European countries in the future.

Based on the experience with hydrogen fuel-cell vehicles in Korea, a hydrogen refilling station needs to service 200 cars a day to be profitable – and a single FCEV is the equivalent of 20 cars.

“Again, this truck is designed to earn money and not for marketing purposes,” he continued, saying customers want the fuel-cell truck rather than a battery-electric vehicle. “First is the refueling time which is obviously much faster for fuel-cell vehicles compared to battery – so 15 minutes is an acceptable time for that. But what’s probably even more important is the higher drive range, the higher payload and lower cost.”

He said the drive range of battery-electric vehicles depends on the number of batteries stored, and therefore greater range entails greater vehicle weight and reduced payload.

“So, with this project, Switzerland is the first country which is changing to a hydrogen society. This is the beginning of a technical revolution. What was vision, is now reality.” 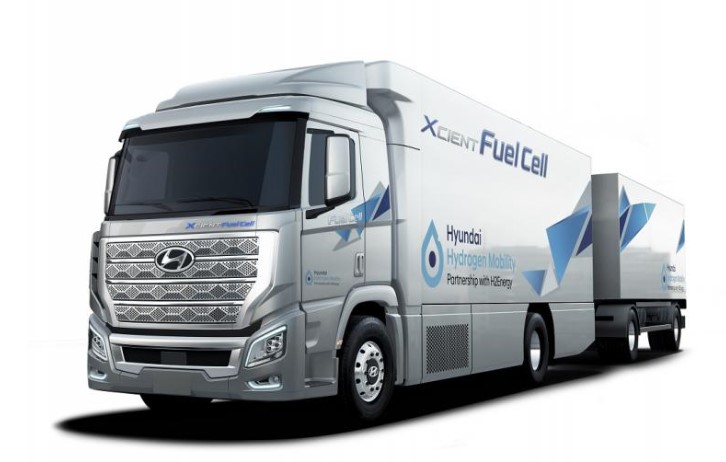 One of the key design inspirations for the HDC-6 Neptune Concept was the streamliner railway trains of the mid-20th century, a prime example of Art Deco industrial design, explained Haksoo Ha, head of the CV and interior design group.

HDC-6 Neptune employs this inspired function-driven design, with new ways to combine both form and function to create an entirely unique new solution within the commercial vehicle industry, while offering a holistic global approach.

“In the case of most steam locomotives, the firebox and boiler made up most of the mass, leaving very little room for style. Still, some trains from the period managed to become rather distinctive and memorable,” Ha said. “Even though fuel-cell components are not easy to package, our designers took up on the challenge of turning them into a valuable source for creativity.”

On HDC-6 Neptune, the design team took packaging challenges and found new ways to combine both form and function. Due to increased cooling requirements, the grill of the concept commercial vehicle is applied as the theme across the entire lower portion of the 6 Neptune.

Ha also noted truck size and weight regulations have led to the development of different CV platforms on either side of the Atlantic. But “compatibility is vital” as the world moves toward cost efficiency and parts sharing. The primary purpose of the Hyundai Neptune is to develop a single platform that can be the basis for multiple vehicle configurations.

And the Neptune design draws from both.

“We compared cab-over-engine truck versus conventional trucks for their strengths and shortcomings in order to come with an ideal future truck package with improved ergonomics,” Ha said. “The Neptune marks the beginning of a completely new era, not just for Hyundai, but also for the entire transport industry.

“This is a truck that is built for the future where we venture into new frontiers through innovation and clean sustainable technologies. While revolutionary, the Hyundai Neptune is just a beginning. Large-scale collaborations and advanced research efforts are the key to realize the full transformation of the mobility and logistics industries.”

This article written by Kevin Jones first appeared in Refrigerated Transporter, a sister publication of WardsAuto.