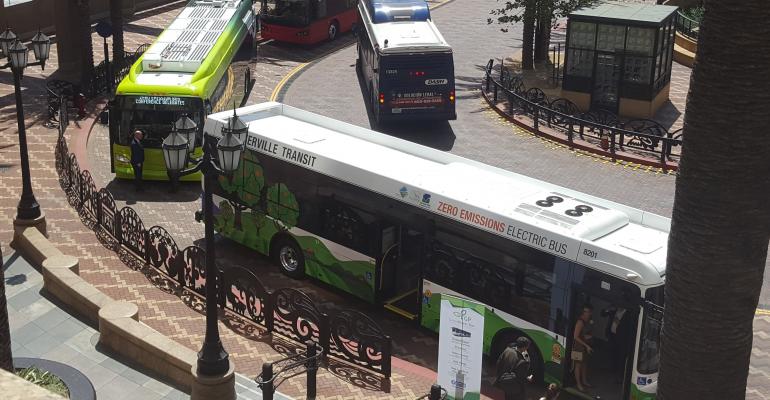 Although expensive, hydrogen-fueled buses have up to twice as much range as battery-electric buses. They also can refuel quickly, and they are easier to scale up because one hydrogen refueling station can handle larger volume than a single charging post.

LOS ANGELES – Battery-electric buses get most of the press these days, but there is another type of electric bus that transit industry professionals say should be getting more attention: hydrogen fuel-cell electric buses, or “the other electric bus,” as they like to call the technology.

Fuel-cell buses use hydrogen to generate electricity, as opposed to battery-electric buses, which store electric energy on board. So, hydrogen fuel-cell buses refuel rather than recharge.

HFC electric buses have up to twice as much range since more energy can be stored in a tank than a battery, he says. They can be refueled quickly. And they are easier to scale up because one hydrogen refueling station can handle a much larger volume than a single charging post.

“The cost is the impediment to market entry,” he says.

A fuel-cell electric bus costs some $1.2 million compared to $750,000 to $900,000 for a battery- electric bus, according to a report by the Alameda-Contra Costa Transit District.

Under the right conditions, however, the cost of operating hydrogen fuel-cell buses is the same or less than compressed natural gas or diesel buses, participants say.

The Sunline Transit Agency of Thousand Palms, CA, figures its total coast per mile for the fuel- cell buses is $0.42 compared to $0.48 for CNG buses, says Lauren Skiver, CEO and general manager.

Sunline operates out of Thousand Palms, CA, in the desert county of Riverside. It has a fleet of 10 hydrogen buses operating now and six more on order.

A key to keeping costs down:  Sunline invested in hydrogen refueling infrastructure and makes its own hydrogen fuel. So, its cost per kilogram is $5 compared with up to $30 if it had to buy the fuel on the open market, said Skiver.

“This has been the smartest thing the agency ever did,” she said.

Transit agencies in California have a special interest in zero-emission buses because of current and upcoming regulations. The state’s 2018 Zero Emission Vehicle Action Plan Priorities Update, issued by the governor’s office, calls for 5 million electric vehicles – including hydrogen-powered buses – to be on the road by 2030.

And, the California Air Resources Board on Sept. 28 held hearings on the Innovative Clean Transit Regulation. It would require all transit fleets in California to be zero-emission by 2040.

The Orange County Transportation Authority anticipates the regulation will go into effect. It currently runs one hydrogen fuel-cell bus, but will boost that to 10, replacing CNG buses at a cost of $12 million. The funds come from a combination of OCTA and CARB grants, according to a report in the Orange County Register.

The OCTA figures scaling up its fleet will bring down its hydrogen fuel costs, which currently run at $16 per kilogram on the spot market, says William Habibe, manager of transit technical services for OCTA.

Producing hydrogen for large fleets is the way to bring costs down, says Steve Syzmanski, of NEL Hydrogen of Norway. NEL plans to build the largest hydrogen plant in the world in Norway.  Fleets allow the best utilization of the electrolyzer used to create hydrogen fuel, he said.

“You can achieve fossil-fuel parity under certain conditions,” Syzmanski says.

As with all new technology, there are worries about the reliability, maintenance and safety of hydrogen-powered buses. Fuel-cell stacks have proven to be extremely reliable, running up to 30,000 hours, according to a report by the National Renewable Energy Laboratory.

“We have proved to the world that a fuel cell can run up to 30,000 hours and beyond,” says Salvador Lamas, COO of the Alameda-Contra Costa Transit District.

Located in the San Francisco Bay Area, AC Transit runs 13 hydrogen electric buses with plans to grow that to 24 by mid-2019.

It has 270 mechanics trained to work on the buses. Having a team of trained mechanics who regularly work on them is crucial to keeping maintenance costs down, says Sunline’s Skiver.

There will be performance issues, she said. The key is to determine if they are new technology issues or regular bus or human issues.

If Sunline discovers a problem was a human issue, management addresses it with the employee.

When it first added hydrogen-fueled buses to its fleet, its drivers were scared of the vehicles, says H.E. Christian Peeples, a director at large for AC Transit.

“They talked about the Hindenburg,” he says. “With education, they loved them.”