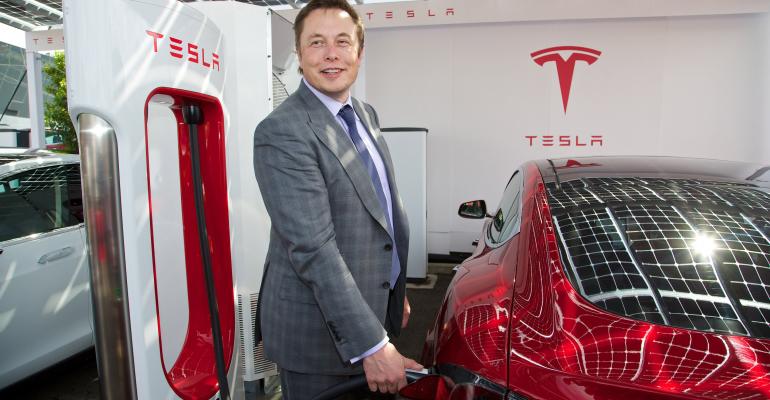 CEO Elon Musk has long sought to evolve Tesla into more than a manufacturer and seller of automobiles and position it as part of a greater campaign to promote clean energy. That could explain his recent bid to purchase, and fold into the Tesla brand, the largest installer of residential solar-power systems in the U.S., SolarCity. &nbsp;

Ten years since introducing its all-electric Roadster, three months after unveiling the 5-seat Model 3 sedan and days before the July 29 opening of its battery “gigafactory” in Nevada, Tesla Motors keeps market experts guessing about its ultimate impact on the auto industry.

Not that there’s much doubt about the upstart automaker’s current market strength. The all-electric, 5-door luxury Model S which, via its high performance, advanced technology and elegant styling, helped Tesla revolutionize the way the public and the auto industry itself view EVs.

Tesla topped the U.S. electrified segment in 2015 with 25,245 sales and in this year’s first six months with about 13,540, according to WardsAuto estimates.

But CEO Elon Musk long has sought to evolve Tesla into more than a manufacturer and seller of automobiles and position it as part of a greater campaign to promote clean energy. That could explain his recent bid to purchase, and fold into the Tesla brand, the largest installer of residential solar-power systems in the U.S., SolarCity, which he helped found in 2006 and continues to serve as its chairman.

Musk announced earlier this month the automaker’s website now is simply Tesla.com, instead of teslamotors.com, which it had been since its launch. In a recent statement the company says in part: “Tesla’s mission is to accelerate the world’s transition to sustainable energy. Tesla is not just an automaker, but also a technology and design company with a focus on energy innovation.”

Staking claim to the eco-friendly high ground deeply resounds with Tesla’s growing fan base, many of whom are young, upwardly mobile professionals who are tech-savvy and highly motivated by environmental issues.

Tesla buyers “firmly believe technology can solve our environmental problems,” Charles Morris, author of the book, “Tesla Motors: How Elon Musk and Company Made Electric Cars Cool and Sparked the Next High Tech Revolution,” tells WardsAuto.  “Naturally, you would be attracted to Tesla,” says Morris, who also is senior editor of Charged magazine.

Protecting the environment was central to “The Secret Tesla Motors Master Plan (just between you and me),” a blog entry Musk posted in 2006, when he chaired the company’s board of directors and two years before he became CEO.

Musk on July 20 published another blog entry, “Master Plan, Part Deux,” in which he further explains his vision for energy sustainability and Tesla’s role in advancing the cause.

“The point of all this was, and remains, accelerating the advent of sustainable energy, so that we can imagine far into the future and life is still good,” Musk writes. “It's not some silly, hippy thing – it matters for everyone.”

Most of the 373,000 people who slapped down $1,000 deposits earlier this year to reserve their turns at owning Tesla’s Model 3 undoubtedly were influenced by the car’s $35,000 price, 215-mile (345-km) single-charge range and advanced apps and gadgets, notes an Associated Press story.

When researchers from the University of California, Davis, and Carnegie Mellon University asked consumers to share what they knew about EVs, they learned the Tesla brand was well known nationwide, even among those not planning on buying electrics, the AP says.

And Tesla hasn’t sacrificed performance for the sake of panache.

“Tesla has an advantage in that its EVs have significantly better acceleration performance than other EVs on the market,” Kate Whitefoot, an associate professor of mechanical engineering at Carnegie Mellon, tells WardsAuto.

Tesla claims on its website the Model 3 will go from 0-60 mph (96 km/h) in less than six seconds, whereas General Motors’ first-generation Chevrolet Volt had a 0-60 time of 9.2 seconds in electric mode and the new Chevrolet Bolt ramps up in about seven seconds.

“Tesla has been putting more emphasis on acceleration. They have already proven that they can make a sporty EV that is fun to drive,” Whitefoot says. “It is a very interesting strategy, attracting auto enthusiasts that may not have normally been interested in purchasing an EV but will consider a Tesla.”

At the same time, Morris contends GM and other, bigger OEMs “could be selling a lot more EVs...these are excellent automobiles that they’re building.”

Had the big OEMs established separate brands for their EVs and other alternative-fuel vehicles, much like GM launched the Saturn nameplate in 1985, Tesla’s EV competitors could have developed identities distinct from the familiar names of their manufacturers, Morris says.

Gil Tal, a UC-Davis research professor who specializes in transportation technologies and policy, wonders if automakers really would benefit from separating their electrified models from other product lines.

For instance, he tells WardsAuto, Nissan opted to sell the all-electric Leaf under the Nissan nameplate “to differentiate itself from other OEMs,” yet “I don't have any strong evidence they will sell regular cars by showing they are innovators.”

Morris grumbles the bigger OEMs aren’t selling more EVs “because they're not really choosing to sell them.”

The bigger automakers simply don’t feel compelled to sell more EVs at this stage of the market’s development, says Jeremy Michalek, an engineering professor and director of the Vehicle Electrification Group and Design Decisions Laboratory at Carnegie Mellon.

“Clearly, there’s a lot of enthusiasm for Tesla,” he says, but “you have different firms playing different roles. Sure, Tesla focuses on EVs exclusively. When compared to GM and Ford, they have a different situation.

Although “Tesla is creating more excitement, EVs are still a tiny, tiny part of the market,” Michalek notes.

“In the last two or three years, you saw the very early innovation and adopters who were drawn because it was new,” Tal says. “The ones who put down their $1,000 deposits were already the second and third waves of adopters...They see that other people have it and they like to follow a good story.”

No doubt “Tesla is a great innovator, something people are drawn to,” he says. “But I can tell you for sure” that a significant number of those who initially thought to purchase Model 3s “will buy different cars in the end.”

That’s because, as Tesla leads advance of automotive technologies, the number and variety of product options will grow, along with potential buyers in the consumer pool, Tal says.

“I do think Tesla will have a positive effect,” he says, but instead of establishing an exclusive market, as some think is happening, its individual successes will leave more room for other brands to thrive.

“I hope and believe in Tesla, but it’ll be a win-win situation.”