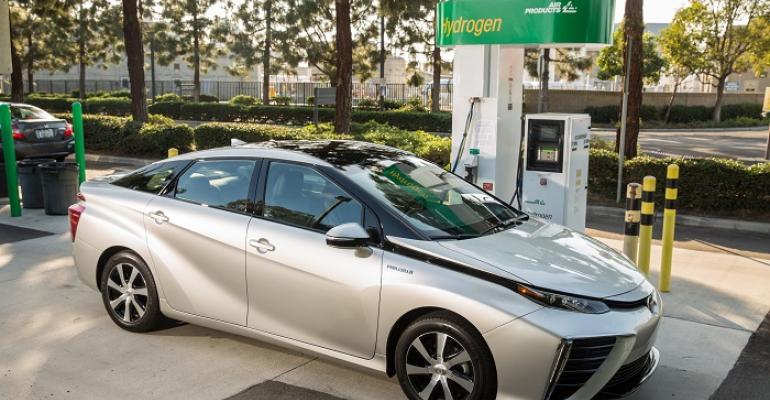 In order to purchase a Toyota Mirai a potential buyer must live near a hydrogen refueling station, but there still are few publicly accessible stations in California.

DETROIT – Toyota is limiting deliveries of its Mirai hydrogen-fuel-cell car as hydrogen-refueling stations have been slow to open in California.

“It’s not a stop-sale, we have just asked (dealers) not to make deliveries until we have a station open,” Jim Lentz, CEO-Toyota Motor North America, tells media on the sidelines of the 2016 Automotive News World Congress here.

Toyota has been retailing its Mirai FCV since Oct. 21 in California, the only U.S. state with a relatively decent amount of hydrogen refueling stations.

However, while the California Energy Commission once wrote it hoped 50 stations would be operational in the state by late 2015, as of early 2016 there’s still fewer than a dozen.

A map on the California Fuel Cell Partnership website shows roughly 50 stations are in the permit process.

“There are fewer stations than we would have preferred right now,” Lentz tells the crowd in a Q&A session following a speech here.

For instance, Lentz tells media a station in Santa Monica still is under construction, so Toyota has instructed its dealership there not to deliver the Mirai. Only eight Toyota dealers in the state are selling the Mirai, four in Southern California and four in Northern California. All were selected based on their proximity to stations that are open or were to open soon.

Toyota will work with a customer who  is employed, rather than lives, near an open station, Lentz says.

“I’m pretty confident by the end of the year we’re going to get to 48. It’s just growing pains,” he says.

“Growing pains” is the rough assessment of the situation as well by American Honda Executive Vice President John Mendel, who tells WardsAuto he’s not worried as the automaker approaches the launch of its own FCV, the Clarity, later this year.

Because of their long range on a full tank, FCVs don’t need as many stations as gasoline-powered vehicles, Mendel notes

The Mirai has a 300-mile (483-km) range on a tank of hydrogen, while Honda has said the Clarity’s range will be somewhere north of 300 miles.

Meanwhile, Lentz says he expects 62%-64% of Toyota’s U.S. employees who are eligible to work at its new Plano, TX, headquarters to do so.

Toyota is offering jobs to any employee who can and wants to move to Plano.

He tells the crowd here some 75% of workers eligible to make the move have requested more information.

“Everyone has a job if they want it, so it’s basically finding out who’s really interested in making this move,” he says.

The majority of employees eligible are based in Southern California. Lentz says 3,000 of Toyota’s 5,200 SoCal workers have the chance to move.

The remaining 2,200 jobs, at parts, port and field-sales operations, will remain in the region.

Lentz was one of the first 50 Toyota employees to move to Texas, doing so in late-summer 2014. The automaker now has 420 workers in the Dallas region in temporary office space.

Toyota’s under-construction campus in Plano should be ready by early 2017, Lentz says.

The consolidation of Toyota’s sales, manufacturing administration and holding-company functions into one campus is not easy, the CEO says, noting Toyota has to make common various functions that currently are disparate.

Toyota has been one of the more cautious automakers on the topic, citing last week at CES 2016 in Las Vegas the need for “trillion-mile” reliability of autonomous vehicles.

“We don’t see a day soon when you can just hop in the backseat and pull out your newspaper,” Lentz tells attendees.

He also cites the plummeting price of oil, and subsequent cheap gas, as one of the biggest challenges automakers face in coming years. Automakers are working toward higher fuel-efficiency standards, spurred by U.S. government mandates, but American car buyers are enamored with thirsty light trucks, sales of which rose 12.7% last year to 9.86 million units, WardsAuto data shows. Car sales fell 2.1% to 7.52 million.