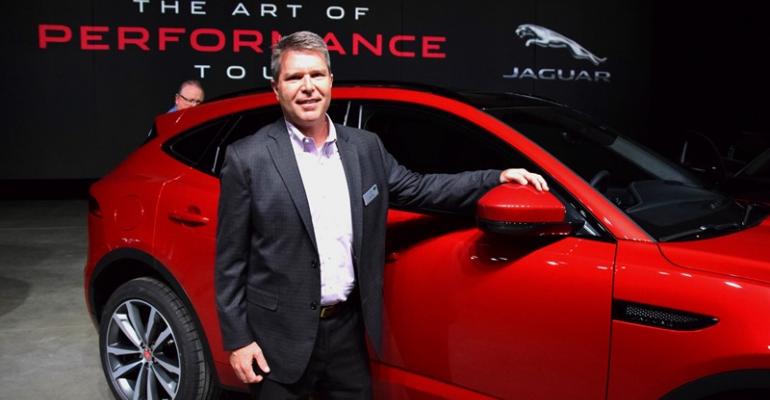 For now, a 48V electric system isn&rsquo;t in the plan, but JLR engineers are pursuing electrical components that can be shared between Jaguar and Land Rover, yet are capable of being tuned to reinforce each brand&rsquo;s identity, Larsen says.

NOVI, MI – Jaguar and Land Rover, two brands that not long ago relied heavily on gasoline V-8s, continue to recast their powertrain strategies with a migration toward 4- and 6-cyl. gasoline and diesel engines and a pledge of widespread electrification.

“As of 2020, every all-new product will have some form of electrification,” Dave Larsen, director-product planning at Jaguar Land Rover North America, says during a recent Jaguar event here. It will take several years before all vehicles in each portfolio are affected.

Vehicles announced so far include Jaguar’s first all-electric car, the I-Pace, which debuted in concept form at last year’s Los Angeles auto show and will go on sale next summer with a 90-kWh battery capable of driving the 5-passenger utility vehicle 240 miles (386 km) on a single charge, Larsen says.

Also getting the green light are plug-in hybrid versions of the Range Rover and Range Rover Sport luxury SUVs, launching in mid-2018. The automaker has yet to reveal technical details about those powertrains but ensures an electric range of about 31 miles (50 km).

Larsen says a high-output version of JLR’s new Ingenium 4-cyl. gasoline engine, rated at 296 hp, can be paired with electric motors in the plug-in hybrids to produce about 400 hp.

Oddly enough, while other automakers are developing 48V electrical architectures as a low-cost solution for powering turbochargers, accessories, steering, stop/start systems and much more, JLR has yet to confirm interest.

For now, engineers at the automaker are pursuing electrical components that can be shared between Jaguar and Land Rover, yet are capable of being tuned and adapted to reinforce each brand’s identity, Larsen says.

Selling electrified Jags and Land Rovers to consumers who only know the brands for their internal-combustion engines is another matter.

“I think we’re really on the cutting edge because we are basically going to be the first luxury manufacturer to come out with a full battery-electric vehicle,” Larsen says, although BMW launched the i3 four years ago.

From the beginning of the I-Pace program, Larsen says the intent was to design it as an electric vehicle rather than merely adapt an existing platform or product for electrification.

“It has the interior volume of a class above. The wheels are pushed out to the corners, maximizing interior space,” he says.

“And I really think once this vehicle comes to market next summer, you’ll look at it and say, ‘That’s a beautifully styled vehicle.’ Oh, and by the way it’s a battery-electric. It’s not a vehicle that looks dorky or looks different. It’s a thrilling design and it’s green. I think we have a unique situation there.”

At the recent Art of Performance Tour event here, Jaguar invited media and consumers to immerse themselves in the brand with test drives and virtual video experiences.

The 5-passenger all-wheel-drive E-Pace is smaller than the F-Pace, with a starting price of $38,600 and a 246-hp Ingenium 2.0L gasoline turbo-4 and 9-speed automatic transmission. Also at launch, the E-Pace is available with a 296-hp version of the Ingenium, also with the 9-speed automatic.

“We’ve made a commitment with diesel,” Larsen says, touting the fuel economy and torque of both engines. The highest take-rate for any of the offerings is the Discovery, which is achieving a 20% diesel sales mix. The Range Rovers and F-Pace are running about 10%, he says.

He attributes much of Jaguar’s success to the F-Pace, the brand’s best-selling vehicle ever, and says Jaguar customers keep getting younger, with an average age of 54 – below that of rivals Mercedes-Benz, Porsche and Lexus.