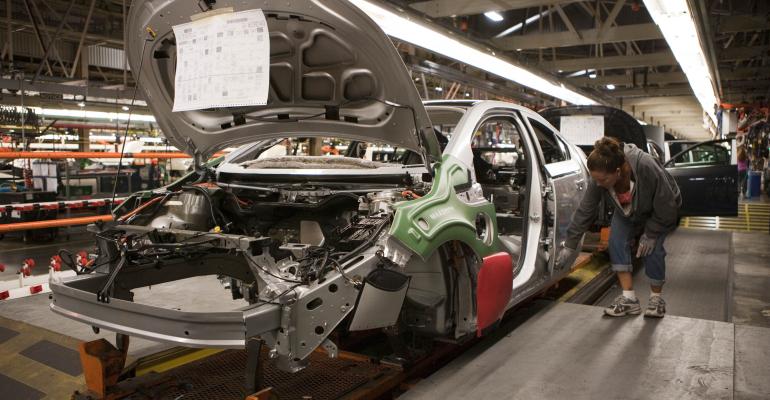 Confused Koreans Have Their Say on Chevy Bolt, Volt

In the Korean language, V and B have a common pronunciation, and the Hangul written or printed symbols for Bolt and Volt are identical. To distinguish the two marques&rsquo; names, GM Korea is adding the English letters &ldquo;EV&rdquo; after the Hangul spelling of Bolt.&nbsp;

When is a Volt not a Volt?

When it’s a Bolt.

That’s the misconception facing GM Korea, which is dealing with two electrified vehicles whose spellings and pronunciations are exactly the same and are written identically, as well.

The automaker is getting something of a reprieve, however: The second-generation Volt goes on sale in South Korea next month, while GM Korea is denying media reports the new Bolt is coming as well.

“There is no plan to launch the Bolt in Korea,” a GM Korea spokesman tells WardsAuto. “It will launch in the U.S. and likely in two international markets sometime after that, and Korea may be one of them.”

Despite the linguistic similarities, the two cars operate with different propulsion systems. The Bolt runs only on battery power, while the Volt is a plug-in hybrid-electric vehicle augmented by a small internal-combustion engine.

In the Korean language, V and B have a common pronunciation, and the Hangul written or printed symbols for Bolt and Volt are identical. To differentiate the names of the two marques, GM Korea is adding the English letters “EV” after the Hangul spelling of Bolt.

The automaker is relying on English spellings of Volt and Bolt EV to identify the products in dealerships and in brochures and advertising, but in the Korean vernacular the vehicle names are still the same.

The Volt, shown earlier this summer at the Busan auto show, is new to the Korean market.

Initially it will be marketed not to the general public but instead to the country’s major car-sharing companies, which will make the PHEVs available for rent by the hour, and seldom for more than one or two entire days.

GM Korea Has Hand in Bolt Development, But Not Final Word

Although the Bolt was designed at GM Korea’s Bupyeong Design Center and the vehicle was engineered there in collaboration with LG Electronics, virtually all advanced prototyping and development work has been done in the U.S., the spokesman says.

Complicating the picture was an LG Electronics news release saying a production line for Bolt components is starting up this month at the company’s Incheon campus next to the Bupyeong plant.

The LG facility will manufacture several components for the Bolt, including electric motors, the onboard charging system, battery pack, high-power distribution modules and some infotainment systems. The car contains so many LG components that some local industry observers have dubbed it the “LG Bolt.”

The LG Electronics release did not explain the parts produced in Incheon would be exported to GM’s U.S. operations where the Bolt will be assembled. The GM spokesman says if and when the Bolt comes to Korea, the vehicle will be imported fully assembled and ready for the market. Production begins later this year at GM’s Orion Township, MI, plant.