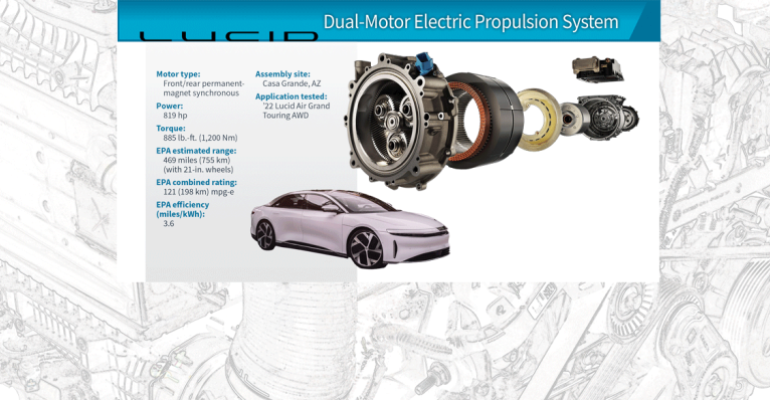 The Lucid Air lands on our 10 Best list in the first year of eligibility thanks to extraordinary on-road performance and technical innovations.

In the electric era, powerful things can come in small packages. Proving that adage is the Lucid Air Grand Touring’s front and rear permanent-magnet AC synchronous motors, which muscle onto our Wards 10 Best Engines & Propulsion Systems winners list for 2022.

While many already are familiar with the Air’s impressive battery pack, enabling roughly 500 miles (805 km) of range, fewer may know the car has one of the smallest but mightiest motors available right now in a mass-production battery-electric vehicle.

After testing and learning about the Air Grand Touring all-wheel-drive grade with 21-in. wheels, which now has a price of $154,000, Wards 10 Best judges were impressed with both the on-road performance of the vehicle and the technological breakthroughs achieved with its propulsion system.

Various advancements, including a single continuous-wave copper winding in its stators, make the Air’s propulsion system, in the words of Judge Dave Zoia, the “pole sitter” among BEVs today.

Another innovation for the Air’s motor are eight stacked rectangular conductors per slot. Compared with traditional rounded wires, this configuration creates maximum copper surface area in the slots and minimizes electrical resistance.

Replacing conventional water-cooling of the stator at the surface, which can raise resistance, Lucid has brought heat extraction close to the copper by inserting small slots in the teeth of the laminations making up the stator. Through these slots or microchannels Lucid runs automatic transmission fluid to extract heat nearest the copper.

At the end of the windings, slots shrink in size to create a sprayer-jet effect of the fluid onto the copper.

Lucid also improves motor efficiency by housing the differential inside the hollow shaft of the 6-pole permanent-magnet synchronous motor.

Altogether, these innovations allow the Air Grand Touring’s motors to achieve 819 hp and 885 lb.-ft. (1,200 Nm) of torque in the car’s blistering Sprint mode, which reportedly pulled one of our judge’s cheeks around the back of their head during a test drive.

That said, the car also can be driven economically, with another judge achieving a great 3.7 mi./kWh on one test run.

The Air’s power and torque are even more incredible given one of its motors weighs just 68 lbs. (34 kg), roughly 1/3 lighter than competitors’ motors. With the capability of 670 hp per motor, each of the Air’s motors can churn out an astonishing 10 hp per pound.

The car’s drive unit also is a relative lightweight. The differential, inverter, reduction gear and the motor itself clock in at a mere 163 lbs. (74 kg).

All these advancements, plus the Air Grand Touring’s 0-60-mph (97-km/h) time of 3.0 seconds and its 900V electrical architecture allowing it to add 300 miles (483 km) of range in 22 minutes on a DC ultra-fast charger, make the BEV sedan’s propulsion system a technical tour de force and, in the words of Judge Drew Winter, “the pinnacle of BEV performance.”