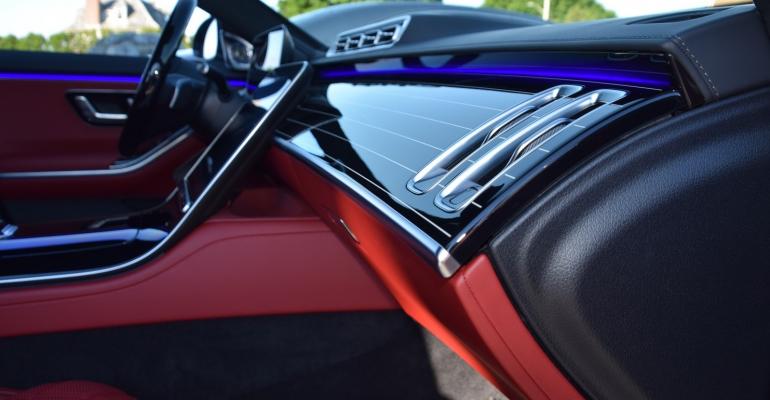 The 2021 Wards 10 Best Interiors are being revealed in random, non-alphabetical order one per day until Oct. 15. This is the third winner profile. Winners will receive their trophies Nov. 16 during Automotive TechWeek in Novi, MI.

Until Mercedes-Benz develops a flavor profile for its vehicle interiors, we’ll have to settle for experiencing its all-new ’21 S-Class sedan by touch, sight, sound and smell.

Even without tasting it, the S580 sedan (pictured below, left) is a multi-sensory feast, right down to the Air Balance cabin fragrance spritzer, the Burmester 4D surround-sound system and the custom massage to sooth one’s troubles away. 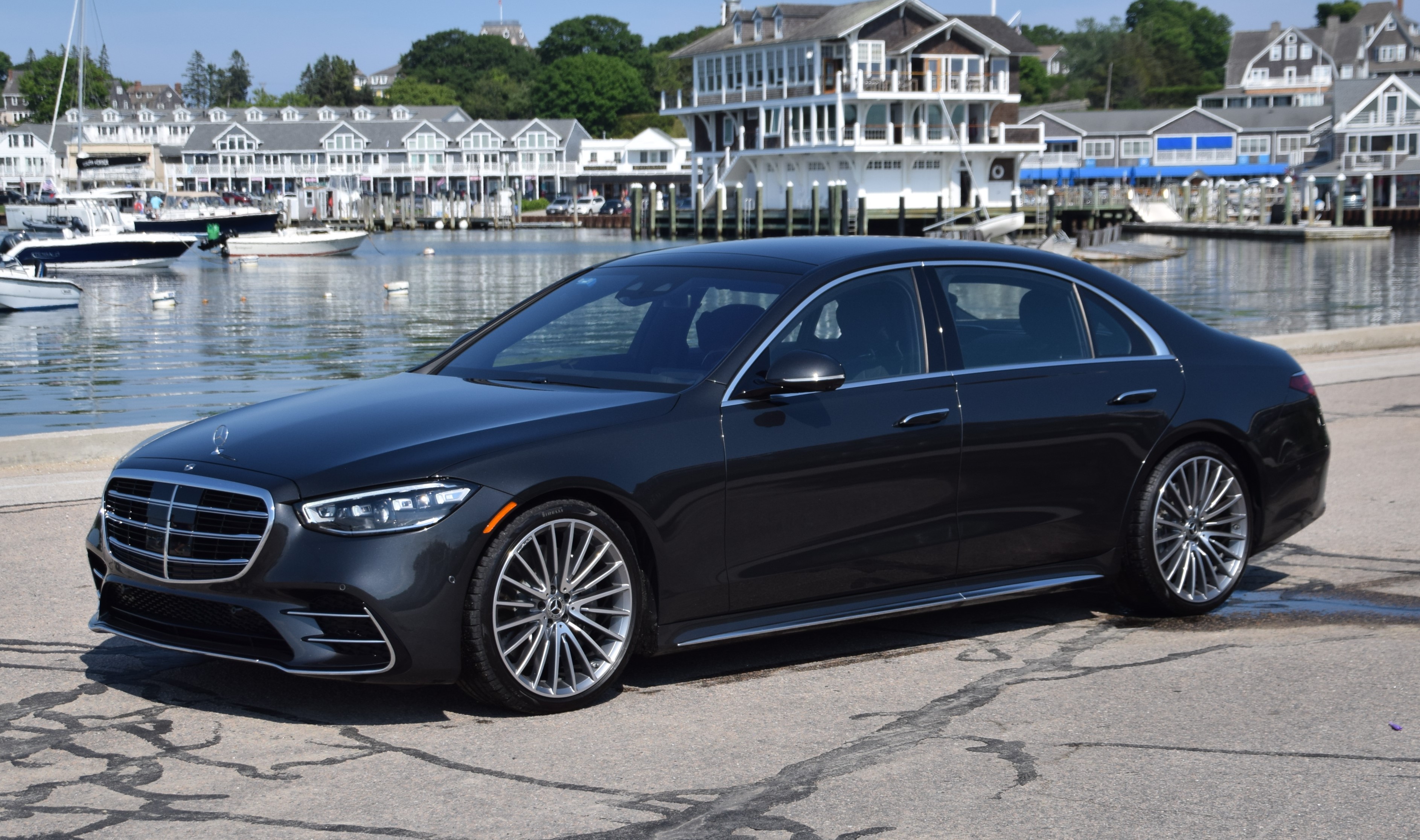 And, of course, visually the S-Class interior is stunning, whether captivated by the pinstriped instrument panel, the swirling rainbow of ambient lighting, the augmented-reality head-up display, the hot red leather (pictured below) used for the first time in an S-Class or the vertically oriented central display screen that can be viewed in 3D.

These are just a few reasons justifying this year’s placement of the Mercedes S-Class on the 2021 Wards 10 Best Interiors list.

Our judges were duly impressed by the fully redesigned S-Class, the sixth Mercedes-Benz to earn a 10 Best Interiors trophy since 2014.

That was the same year the prior-generation S-Class made the cut, setting a successful template for just about every new Mercedes to come, with two wide horizontal display screens set edge to edge, extending from behind the steering wheel to above the center stack.

With the new S-Class, only the horizontal digital instrument cluster remains directly in front of the driver, while an all-new vertical 12.8-in. (33-cm) OLED touchscreen cascades from the center stack and is more ergonomically positioned as a touchscreen that controls all manner of comfort, performance, navigation and infotainment options.

One could spend a half-hour sitting still in the driveway, fully engaged, sorting through scads of menus without frustration.

But there’s so much more to experience beyond screens. During media test drives this past summer, we also got to drive the S-Class with an all-black leather interior, as well as a cabin trimmed in caramel leather with black edge piping. 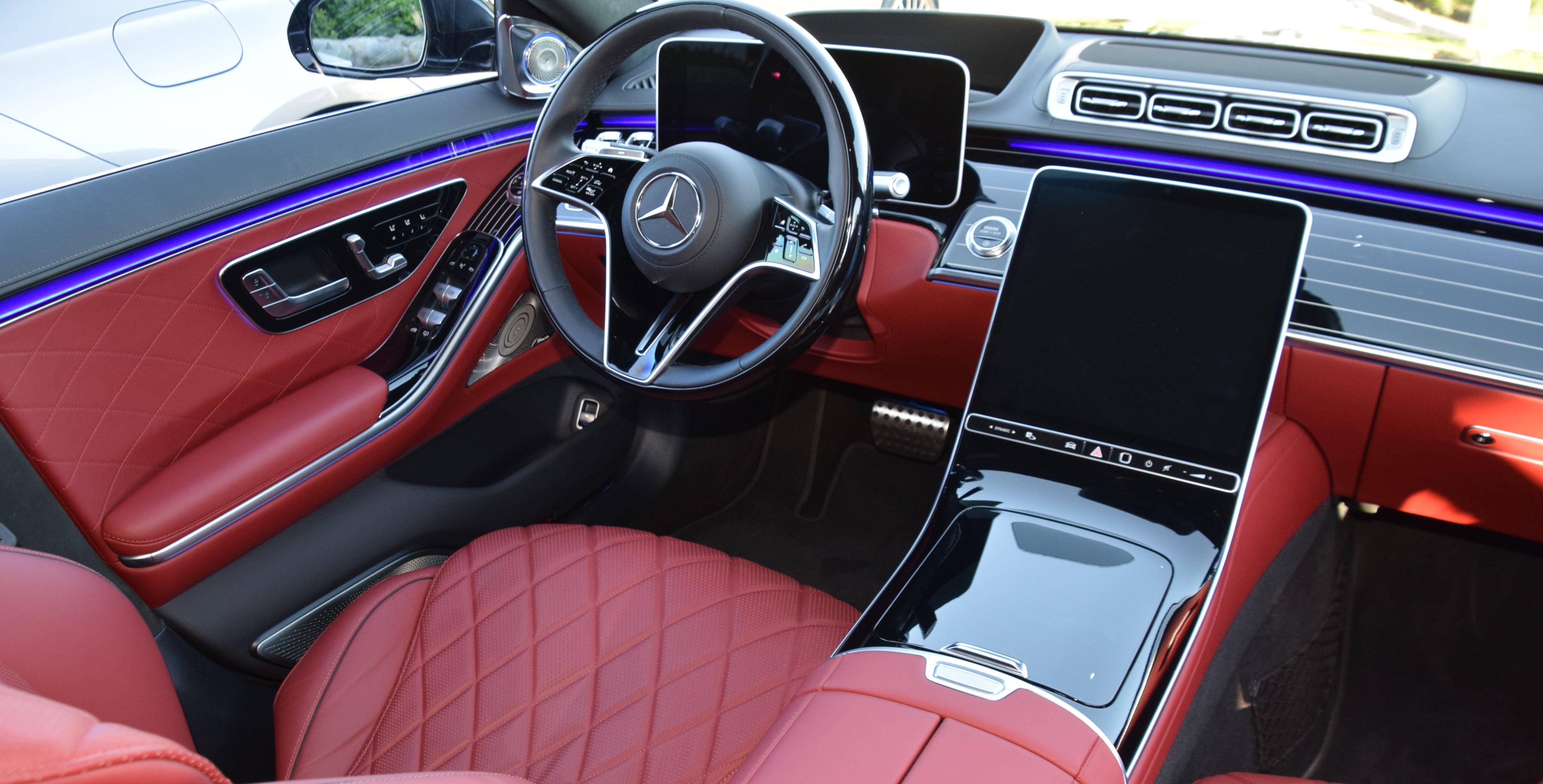 All were equally alluring in their own way, with perforated and diamond-pattern seating surfaces that fit like a glove, topped off with head restraints with attached soft pillows (pictured below) for ultimate comfort.

Approaching the car and opening a second-row door is like arriving at a swanky restaurant you’ve always dreamed of trying.

Legroom is more than ample, and the eye wanders to the artistic, brushed-aluminum Burmester speaker grate overhead, the fastidiously machined window switches, the metallic-trimmed grab handles overhead and the beautifully trimmed microsuede headliner.

Yes, our test car was expensive: $143,240, including about $30,000 in options. But this is Mercedes’ longtime flagship sedan for the executive set, and the pricing is competitive with rivals. 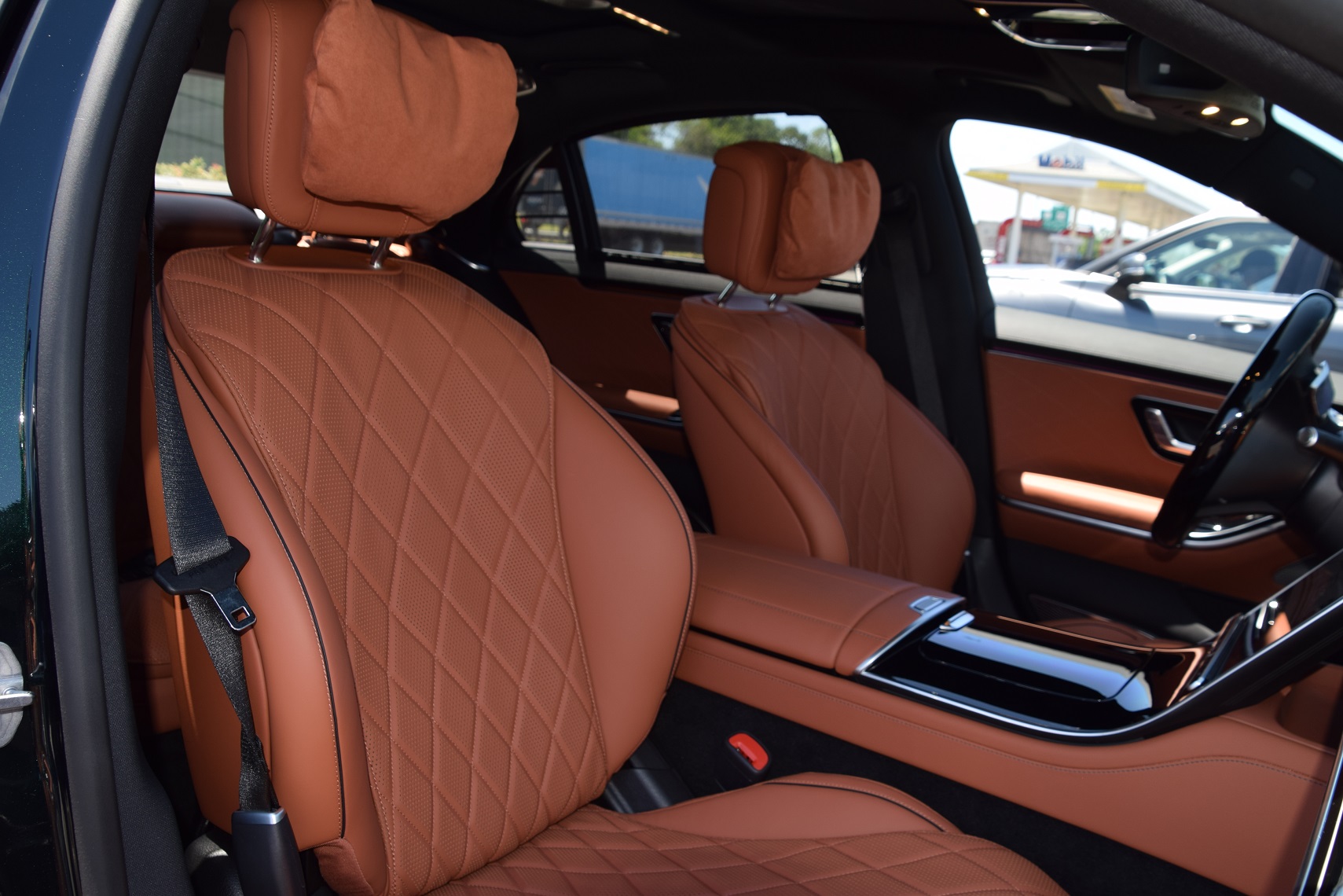 There are so many details that deserve a closer look, particularly the black-and-white pinstriping that is both modern and retro at the same time.

On the vehicle sticker, the feature is listed as a “Piano Lacquer Flowing Lines” option priced at $1,300. It’s a high-gloss surface that some might mistake for plastic, but it’s actually walnut veneer that has been precision cut or drilled so the underlying metal carrier shows through in horizontal lines before being filled with clear coat.

To watch these lines sweep across the instrument panel, then align perfectly as they make a make a gradual 90-degree turn down the door panel (pictured below) and armrest, is nothing short of remarkable.

Throughout the interior, metallic trim is warm and matte-finish, stitching is impeccably applied and high-grade carpet extends upward to door sills.

The overall design minimizes hard buttons for a visually soothing cabin while still creating an ideal user experience with touchscreen and steering-wheel controls that are intuitive and user-friendly. 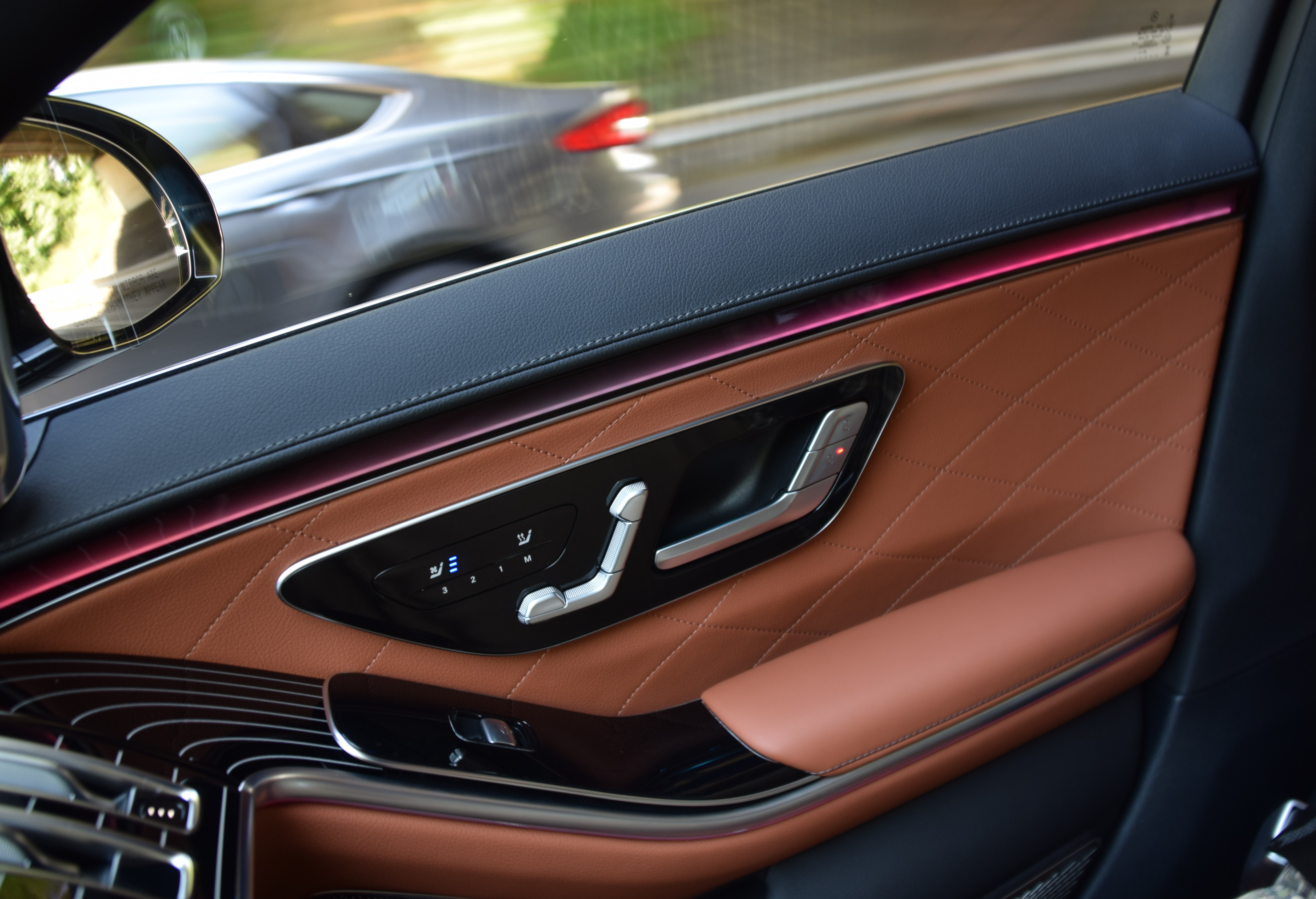 We’ve soundly praised Mercedes over the years for its groundbreaking ambient lighting, pioneered in the last-generation S-Class. But this new version takes the lightshow to a new level.

At night, thanks to a seemingly infinite array of ambient colors, the S-Class cabin can be as visually engaging as a fireworks show or as soothing as a sunset stroll.

And in swirl mode, the colors change as they flow across the instrument panel, along the door trim and along the second-row door panel, too, enveloping every occupant (pictured below).

Judge Drew Winter was dazzled by the S-Class. “Mercedes is the benchmark for seamlessly blending luxury with the latest technologies,” he writes on his scoresheet.

Judge Bob Gritzinger admits the S580 4Matic we tested is expensive “but worth every penny.”

And Judge Christie Schweinsberg has the final word on her scoresheet: “I do think this raises the bar in the ultra-luxury sector.” 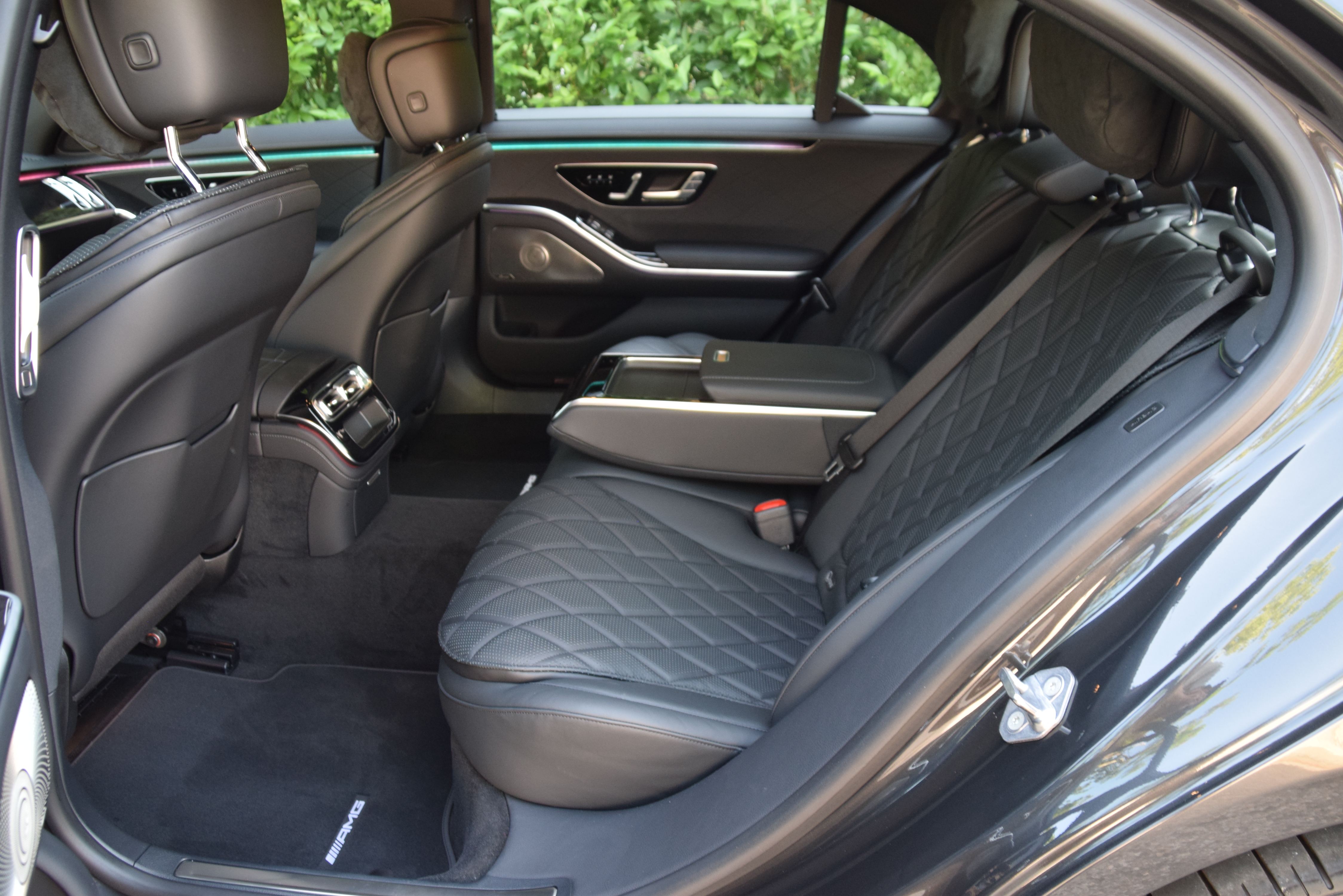