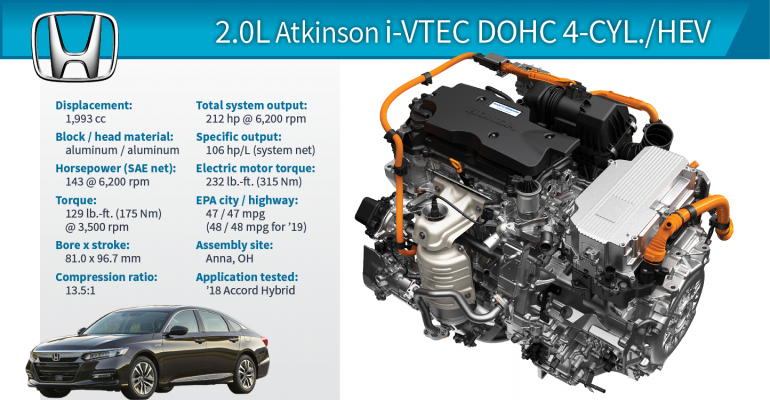 This powertrain is one smooth operator, delivering power and torque in such seamless fashion that it may have you asking, “Is this really a hybrid?”

Unless somebody tells you, or you happen to notice the discrete badging on the front fender or trunk lid, you might not know you’re driving a gasoline-electric vehicle when you get behind the wheel of the ʼ18 Honda Accord Hybrid.

And that’s just about the biggest compliment we could give any hybrid vehicle.

Typically, these fuel-efficiency kingpins fall victim to the annoying, back and forth tug-of-war for control between the internal-combustion engine and electric motor. Then there’s the addition of the heavy battery pack over the back axle that can upset the car’s weight balance, making it feel as if there’s too much junk in the trunk.

We’re thrilled to say there are none of those characteristics with the Accord Hybrid, winner of a 2019 Wards 10 Best Engines award. This car is one very smooth operator.

Of course, the fuel economy is the sedan’s big draw. Although we didn’t quite hit the 47 mpg (5.0 L/100 km) EPA rating, most judges achieved close to 40 mpg (5.9 L/100 km) in the cold-weather test drives during their daily commutes in metro Detroit. That’s nothing to sneeze at in a package the size of the Accord, which features seating for five and still-generous cargo room, despite its extra powertrain gear.

And the performance from the combination of the 2.0L iVTEC Atkinson-cycle gasoline engine and two electric motors is all anyone could ask for in a midsize sedan in this price category.

“Great midrange power and torque for navigating traffic,” reads one judge’s scoresheet. “And it really feels ‛sporty’ in sport mode.”

It also emits a pleasant note – somewhat unusual for a hybrid, with a unique futuristic sound that is both techy and friendly.

“I love the noise it makes when creeping around under EV power,” notes one editor.

But it’s the way the powertrain’s combined peak 212 hp gets to the front wheels that really wowed us.

There’s a lot of complexity here, with the propulsion system quickly shifting between electric, hybrid or engine drive as required, accounting for whether the driver has opted to run in normal, sport or economy mode.

Most of the time, the powertrain works as a serial hybrid, with the gasoline engine acting like a generator to drive the wheels via the two electric motors. Other times – on the highway at steady speeds, for example – it switches to parallel-hybrid mode with a lock-up clutch connecting the engine directly to the wheels. The system can also work as an EV for about a mile with the gasoline engine off and the battery providing electricity to power the propulsion motor.

But the operation is all very seamless, nimble, quiet, amazingly responsive and affordable (just – $34,710 well equipped in Touring trim) – making believers out of even our staunchest hybrid skeptics.

“I can’t believe it, but this makes me like hybrids,” confesses one of the converts among us. 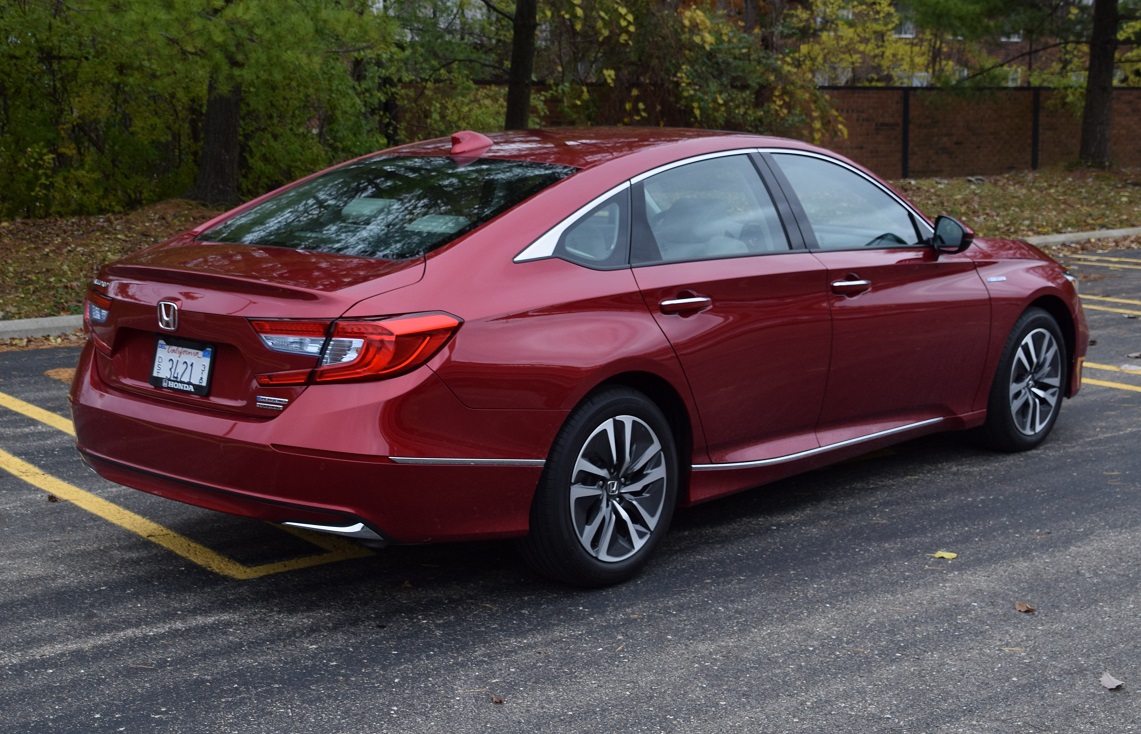 Honda Accord Hybrid both stylish and efficient.