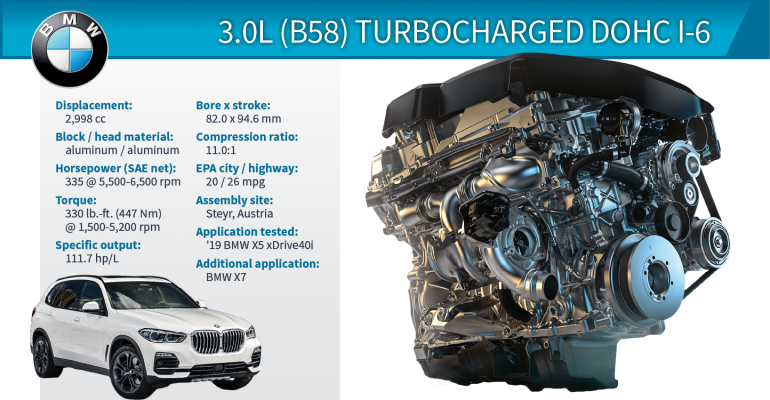 This engine’s so good, BMW expects 90% of X5 volume in the U.S. to carry the improved B58. It strikes the ideal balance between power and efficiency, propelling the generously proportioned X5 to 62 mph in 5.5 seconds.

BMW has won 34 Wards 10 Best Engines trophies over the past quarter century, and 28 of those were for inline 6-cyl. engines. It’s no coincidence that year after year, Munich finds ways to improve the modular inline architecture to deliver unparalleled refinement, high efficiency and effortless revving.

In the case of the all-new fourth-generation X5 crossover, the updated B58 turbocharged inline-6 is rated at 335 horsepower, but it feels like so much more during spirited runs to the redline.

Our judges raved about their seat time in the new X5, and nearly all of them topped 20 mpg (11.7 L/100 km), despite heavy-footed testing.

On his X5 scoresheet, judge Bob Gritzinger calls the B58 turbo-6 a “perfect fit for the car and its buyer,” and he awards perfect scores for both torque and NVH mitigation.

That’s high praise for an automaker whose earlier versions of stop/start were often criticized for being unrefined at restart.

The new B58 engine (code number B58B30M1) also will power the forthcoming X7 three-row SUV, while the earlier version of the B58 (code number B58B30M0) remains the Bavarian workhorse, seeing high volume in the 2-Series, 4-Series, 5-Series, 6-Series and 7-Series cars, as well as the X3 and X4 utility vehicles.

BMW’s massive engine plant in Steyr, Austria (see photo below), produces the B58, along with more than half of all BMW engines used around the world.

BMW had a stellar crop of nominees for this year’s Wards 10 Best Engines competition. In addition to the winning B58, we enjoyed thrilling all-electric battery propulsion in the i3s and the potent, efficient 2.0L B48 turbocharged 4-cyl. in the X2 compact CUV.

But it was the improved B58 engine, in our opinion, that strikes the ideal balance between power and efficiency, propelling the generously proportioned X5 to 62 mph (100 km/h) in 5.5 seconds. And that’s the base engine in the U.S., easily ushering the X5 under our price cap. 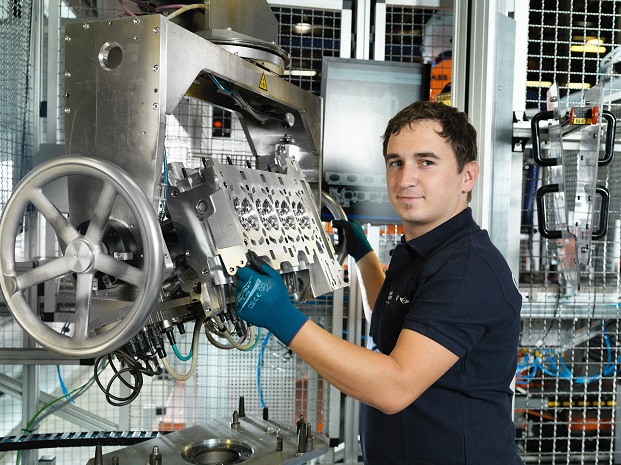