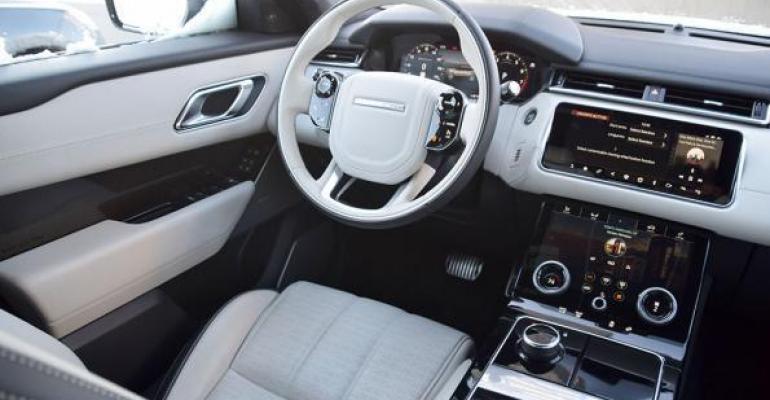 The Velar interior finds itself in the winners’ circle for sleek elegance, its Touch Pro Duo capacitive touchscreens and two large multi-function dials that change purpose quicker than a chameleon changes its colors. (Scroll to bottom for 10 Best Interiors video profile.)

When Tata acquired Land Rover and Jaguar from Ford in 2008 for $2.3 billion, no one could have predicted the steady and even-handed stewardship provided by the Indian automaker for these heralded British brands.

Within four years, Range Rover would launch the Evoque, a smaller, nimble, more-affordable luxury ute that was well received and, by the way, earned a 2012 Wards 10 Best Interiors trophy.

A decade in the Tata fold has resulted in a flourishing product pipeline for both Jaguar and Land Rover, including the new Range Rover Velar, a sleek and lovely 5-seat cruiser that stared down rivals from Alfa Romeo, BMW, Infiniti, Volvo – and even the Jaguar E-Pace – and walked away convincingly with a 2018 Wards 10 Best Interiors award.

From the brushed aluminum ring separating the Light Oyster and Ebony leathers on the steering wheel to the black horizontal stripes with contrast white stitching that runs just below shoulder height across all four outboard seats, the Velar is a case study in restrained, straightforward design, beautifully illustrating that less can be so much more.

Editor Christie Schweinsberg, who has an eagle eye for any hint of shoddy workmanship, couldn’t find a misfitting seam, an uneven gap or a substandard material from headliner to floormats. “Even the door pockets are devoid of flashing,” she writes on her scoresheet.

The Velar interior finds itself in the winners’ circle for attributes that go well beyond aesthetics. The rear seats recline at the touch of a switch, affording an easier view out the sliding panoramic roof. And don’t forget the spectacular 825-watt Meridian sound system or the spa-worthy front-row massaging seats.

But what really sets the Velar apart is a new interface that is probably years ahead of its time. Land Rover calls it Touch Pro Duo, and the system consists of two 10-in. (25-cm) capacitive touchscreens, one positioned above the other on the center stack, sloping away toward the windshield.

The upper screen, which looks familiar and features many of the fonts and colors of previous JLR vehicles, is the entertainment hub for controlling phone, media and navigation. The lower screen controls climate, vehicle settings and seats. When the upper screen is used for something else, the lower screen also can be a conduit for media and phone calls.

But the most ground-breaking feature of this new interface are two large dials positioned underneath the lower screen and integrating digital display screens. The left dial, closer to the driver, can be used to choose from among seven powertrain and suspension settings, including Dynamic, Sand and Mud Ruts.

Both dials also control cabin temperature and fan speed for each side of the vehicle, as well as temperature for heating and cooling the front seats. Plus, the dials serve up as much massage intensity as front-row occupants can handle.

This is nirvana for instrument-panel designers who often must sacrifice their desired clean, sleek look when the engineering department provides a lengthy list of all the functions that need to be accessible. Who needs so many knobs and switches when these uber dials change roles faster than a chameleon changes colors?

The multi-function strategy carries over to the steering wheel, where the driver’s left thumb can browse the big, bright reconfigurable digital display in the center of the gauge cluster. One second, that thumb pad is a volume slider with channel-selector arrows, and the next it has given the driver access to a series of menus in the digital cluster, as an array of four arrows replaces the volume and channel controls.

It all sounds crazy and overly complicated, but these systems are surprisingly intuitive from the start and play an important role in minimizing clutter and driver distraction.