/sites/all/themes/penton_subtheme_wardsauto/images/logos/footer.png
Recent
Featured
Experts Share Tips for Countering Dealership Fraud
Sep 28, 2020
Do not use
brought to you by 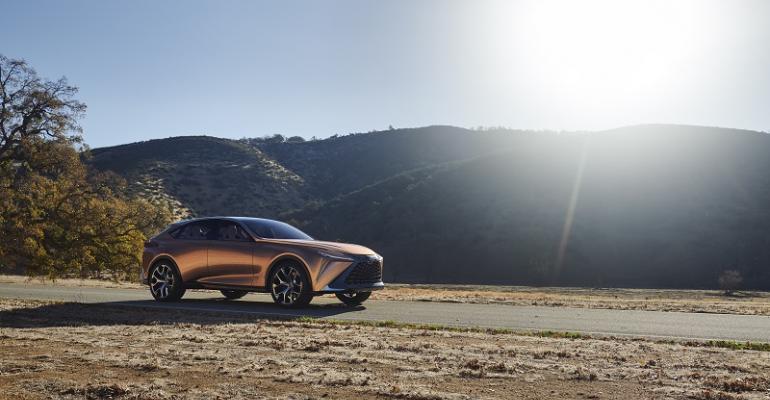 The luxury brand describes the look of the LF-1 Limitless concept as fusing &ldquo;the organic shapes of liquid metal with the sharp edges of a traditional Japanese sword.&rdquo;

“This is our vision for a new kind of flagship vehicle that embraces crossover capability without giving up the performance and luxury delivered by today’s top sedans,” Kevin Hunter, president of Toyota’s CALTY design research center, says in a statement to media ahead of the concept’s debut.

Lexus describes the look of the LF-1 Limitless concept as fusing “the organic shapes of liquid metal with the sharp edges of a traditional Japanese sword.”

Prominent design cues include an exaggerated dash-to-axle ratio for a sports-car-like proportion, a low roofline, a deep-sitting cabin and 22-in. wheels with flared fenders.

The concept wears Lexus’ current brand face, the spindle grille, but the look has been tweaked, giving the impression spindles start at the rear of the vehicle and continue to the nose. The grille uses an LED light surround instead of chrome, with illumination to greet the driver upon arrival.

The LF-1 Limitless has a front fender line extending to the base of the C-pillar and scalloped front doors.

The CUV’s rear has a split spoiler and corner vents, the latter directing air away from wheels, as well as a large glass window extending above the rear seats. 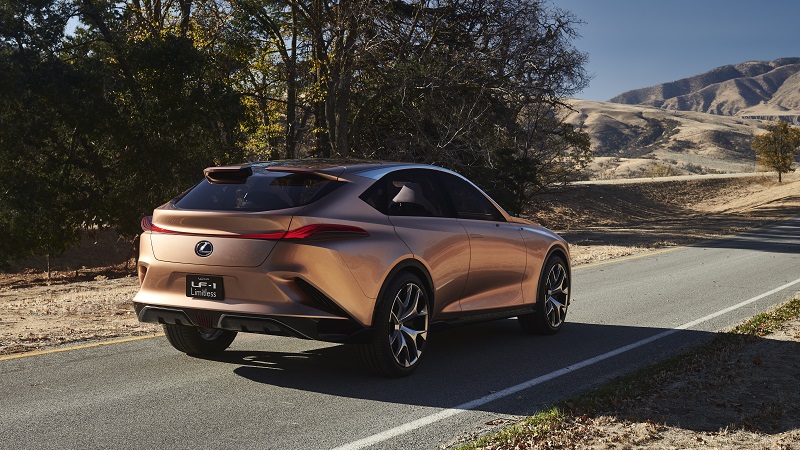 The vehicle’s interior promises comfort for every passenger. For the driver, motion-activated controls and a simple display take the place of knobs and buttons, while the front passenger area has a wide dashboard for an unobstructed view.

Lexus says all powertrain controls are on the steering wheel, including park and reverse buttons and acceleration-controlling paddles, so drivers don’t have to look away from the road for too long.

Ambient lighting is used extensively in the concept CUV’s interior, including at startup when a sequence plays that corresponds to what drive mode is in use.

In theory, parent Toyota’s Chauffeur autonomous technology drives the LF-1 Limitless when drivers want to take their hands off the wheel. This is accomplished via by-wire acceleration, braking and steering, Lexus says.

A 4D navigation system anticipates occupants’ needs based on a programmed route, suggesting restaurants and hotels, while haptic controls are located throughout the vehicle.

The champagne color of the exterior is repeated on interior trim, albeit in a satin finish. Leather seats are covered in a perforated “Chiffon” white leather and trimmed in “Cocoa Bean” dark brown leather. 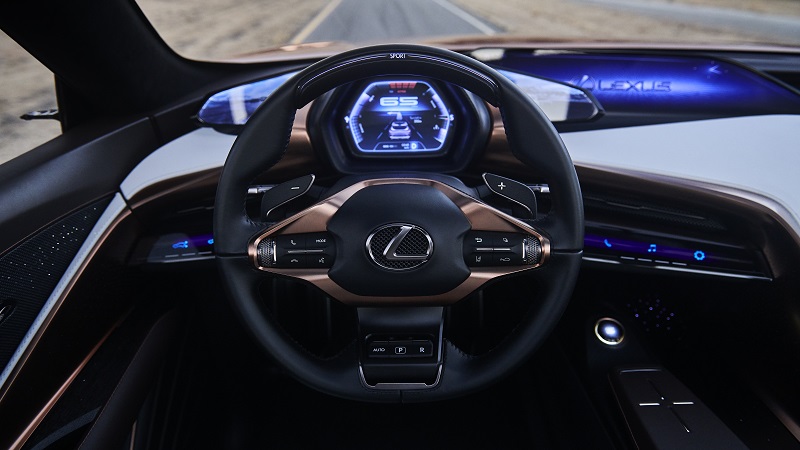 Lexus U.S. General Manager Jeff Bracken notes the LF-1 Limitless is a design study, not an indication of a future model. However, the brand has been tossing around the idea of a large CUV for years to match the Audi Q7, Mercedes GLS and Volvo XC90. The RX, Lexus’ long-standing best-selling model in the U.S., is considered midsize although it now offers a long-wheelbase version with three rows.

Lexus envisions the LF-1 Limitless as running on an electrified powertrain, and reiterates by 2025 it plans to have an electrified (hybrid, plug-in hybrid, fuel-cell, battery-electric) variant of every Lexus model worldwide, as well as some dedicated electrified models.