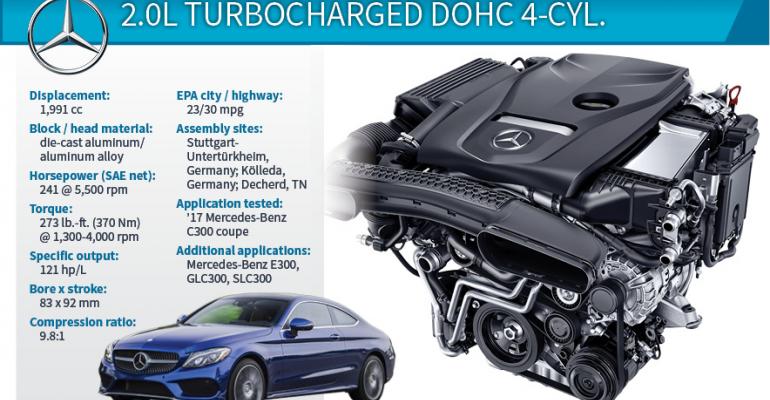 The BlueDirect 2.0L turbo-4 first appeared on our radar during a test drive last spring of the larger E-Class, a highly intelligent sedan with autonomous capabilities but whose most impressive feature might be the unassuming but exceedingly capable 4-cyl.

Three European luxury sport sedans and one coupe, all sporting 2.0L turbocharged 4-cyl. engines, were duking it out for a spot on this year’s Wards 10 Best Engines list.

The most powerful of the bunch was the 280-hp Alfa Romeo Giulia. Fuel economy was OK, but it was too noisy for some of us. The 252-hp Audi A4 is the ideal engine in so many ways, except it comes up short in observed fuel economy. The 248-hp BMW 330i led the pack in mileage, topping 28 mpg (8.4 L/100 km) for several editors.

This methodical process of elimination led us to one engine that does it all – smooth and quiet at startup and idle, rev-happy and ready to run and capable of 27 mpg (8.7 L/100 km) under an occasionally heavy foot.

The BlueDirect 2.0L turbo-4 (internal codename M274) first appeared on our radar during a test drive last spring of the larger E-Class, a highly intelligent sedan with autonomous capabilities but whose most impressive feature might be the unassuming though exceedingly capable 4-cyl.

The M274 engine is fast becoming the go-to workhorse in a wide array of Mercedes-Benz vehicles, from the high-volume C- and E-Class to the SLC roadster and GLC utility vehicle.

In all these rear-wheel-drive vehicles, the engine is longitudinally oriented, as opposed to the transverse application of Mercedes’ M270 engine in the entry-level front-wheel-drive CLA250 sedan that arrived three years ago.

But the M274 holds the trump card in output with an extra 33 hp and 15 lb.-ft. (20 Nm) of torque, and it also has a unique cylinder head made of high-strength aluminum alloy. Its crankshaft is hollow-cast to reduce mass and uses eight counterweights. A modular balance shaft in the lower part of the block reduces inertia.

Fast-acting piezo injectors centrally positioned above the combustion chambers spray in fuel up to five times per cycle at pressures of up to 2,900 psi (200 bar). The process was engineered to ensure air and fuel “tumble” within the chambers, enabling higher combustion speeds.

enables up to four sparks to be discharged in succession within one millisecond, creating larger spatial expansion (and a more complete burn) than conventional ignition. A key result is reduced fuel consumption, which improves even further with the car’s standard stop/start system.

Variable camshaft adjustment ensures optimized valve timing for easier breathing on both the intake and exhaust sides of the engines.

Mercedes-Benz engineers contend the BlueDirect 2.0L turbo-4 is one of the lightest gasoline engines in its class.

The M274 is an extremely versatile powerplant, springing from an engine family that also sees duty in Daimler’s extensive fleet of cargo vans. Three plants (two in Germany and one in Decherd, TN, owned by joint-venture partner Infiniti) make this engine for use around the world.

Such diverse applications make this engine all the more appealing to WardsAuto judges.