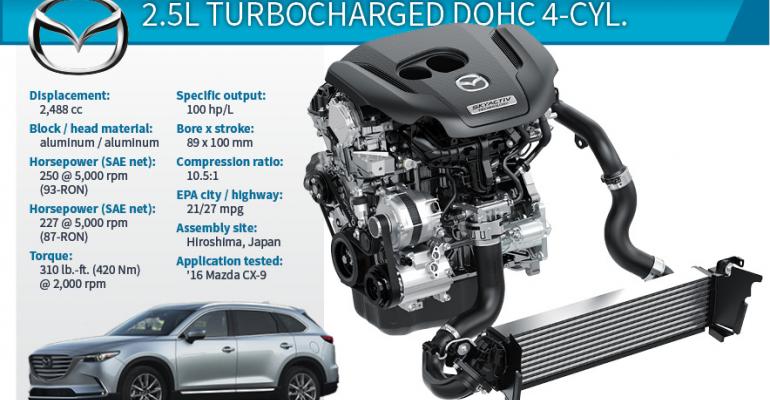 Many automakers are great at combustion engineering, but Mazda is turning it into an art form.&nbsp;

Imagine putting your thumb over the end of a garden hose, and you know the secret to how Mazda’s Skyactiv-G turbocharged 4-cyl. engine fools you into thinking the 7-passenger CX-9 CUV has a V-6 under the hood.

Replacing a heavy V-6 engine with a 2.5L I-4 turbo helped Mazda engineers to chop 250 lbs. (113 kg) from the new-generation CX-9 and improve EPA fuelefficiency 25% compared with its predecessor. But these factors alone would not have made it a better vehicle if it felt underpowered.

Mazda answered this challenge with the ingenious Dynamic Pressure Turbo system, which uses a butterfly valve in the 2.5L engine’s exhaust stream that creates more pressure by funneling exhaust gases through a smaller orifice when the engine is spinning at low rpms; just like holding a thumb over the end of a hose creates a hard spray.

The increased pressure causes the turbo to spool up quickly even under light throttle, giving the smallish engine a boatload of low-end torque that makes the 4,000-lb.-plus (1,814 kg) vehicle responsive and as fun to drive as a mainstream CUV with three rows of seats can be.

WardsAuto Editor Christie Schweinsberg summed up all our thoughts about the engine’s near-instantaneous 310 lb.-ft. (420Nm) of torque when she wrote this on her score sheet: “This is a 4-cyl.? Damn!”

But this isn’t the engine’s only novel engineering feat . Mazda has a reputation for squeezing extra efficiency out of naturally aspirated engines with higher than average compression ratios.

With the Skyactiv-G, it found an inventive way to do the same with turbocharging, even though forced induction is not sympatico with squishing air-fuel mixtures really hard.

Typically a high 10.5:1 compression ratio with a turbocharger will require extra fuel to be “dumped” into cylinders for cooler temperatures and knock prevention. This process, called enrichment, hurts efficiency, especially real-world fuel economy.

But in a first for Mazda – and perhaps for all mass-market turbocharged engines – engineers took a different look at cooled exhaust gas recirculation and used a 4-3-1 pulse-converter manifold design that positions the four exhaust runners closely together so cooler air from one cylinder gets vacuumed up by high-flow hot exhaust gas exiting a different combustion chamber like paint gets sucked up and streamed through the nozzle of an airbrush paint gun.

The four runners unite into three and then into one, where they converge at the turbocharger.

The benefit of this 4-3-1 layout is enough suction (or “scavenging”) to draw residual hot exhaust gases from each combustion chamber, in sequence, resulting in lower temperatures in each cylinder as it prepares for the next combustion cycle.

The lower cylinder temperatures allow the engine to run at the higher compression ratio without requiring lots of enrichment to prevent knocking.

This year WardsAuto editors were impressed by the mind-boggling power density and performance of some engines and by the extreme efficiency and low emissions achieved through electrification of others.

But the Skyactiv 2.5L I-4 stands out for the superb performance and efficiency it delivers in the real world of mainstream vehicles and for the extreme ingenuity of Mazda’s powertrain engineers.

Many automakers are great at combustion engineering but Mazda is turning it into an art form.