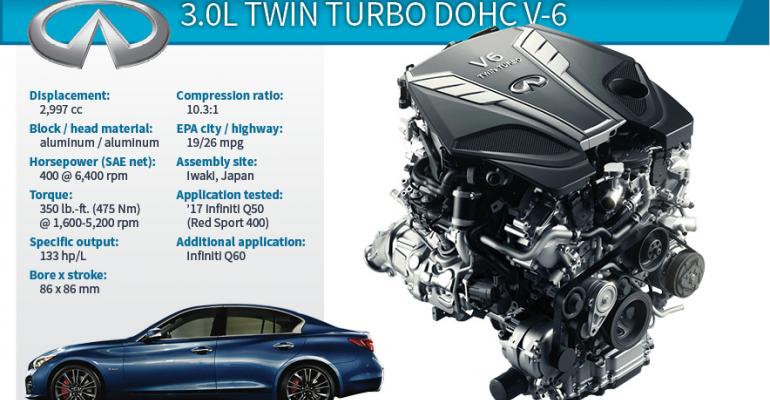 By strapping a turbocharger to each cylinder bank of an engine nearly half the size of the Hemi V-8 &ndash; and incorporating lots of compelling technologies &ndash; Infiniti has displaced displacement while compromising nothing.

In the powertrain world, the term “downsizing” might conjure images of impatient drivers with furrowed brows, doubtful that a certain engine under the hood can reach highway speed by the end of the on-ramp. Skeptics with a need for speed want triple-fudge ripple, not vanilla.

In the upper reaches of the powertrain world, the concept of downsizing can and should be viewed much differently – even embraced – because luxury sports cars that once relied on V-8 power now get the job done most capably with only six cylinders, direct fuel injection and forced induction.

For context, let us consider the evolution of high-output powerplants earning recognition on our list. Ten years ago, two naturally aspirated V-8s made the cut – a 340-hp 5.7L Hemi in the Chrysler 300C and a 325-hp 4.6L SOHC job in the Ford Mustang Shelby GT. Those engines were big and heavy and sure had bark, and observed fuel economy of around 17 mpg (13.8 L/100 km) seemed pretty good at the time.

You can see where this is going. Infiniti punishes these engines from a decade ago by producing a lot more power and torque (although the Hemi was supreme with 390 lb.-ft. [529 Nm]), while simultaneously dusting them in fuel efficiency.

By strapping a turbocharger to each cylinder bank of an engine nearly half the size of the Hemi – and incorporating lots of compelling technologies – Infiniti has displaced displacement while compromising nothing.

Who needs a V-8 when this brilliant example of downsizing, combined with diligent efforts to reduce friction and vehicle weight, can allow a midsize sedan with six cylinders of motivation to move so swiftly, smoothly and effortlessly?

The Q50’s 3.0L (internal codename VR30DDTT) cruises with serene confidence and is docile around town. But find an open back road, crack open the throttle and this engine begs for high-rev flogging. Traction control will even let you light the tires in second gear with a pinned accelerator pedal.

The unique arc-spray mirror-bore coating on cylinder walls reduces friction, prevents knock and boosts fuel efficiency, while the exhaust manifolds are integrated within the heads, shaving weight and shortening the distance to the catalyst, which results in quicker light-off and reduced emissions.

In this year’s competition, Infiniti’s VR stared straight down the barrel of another excellent 400-hp 3.0L twin-turbo V-6 in the Lincoln MKZ and all-new Continental. These two engines feel like twins separated at birth, both capable of a 60-mph (97 km/h) sprint in under 5 seconds. The Ford engine actually makes more torque.

But Infiniti’s V-6 has the higher 10.3:1 compression ratio, which contributes to better fuel economy, based on our tests and EPA ratings. And it also scored higher for its ultra-silky NVH profile.

For that reason, Infiniti’s powertrain engineers are celebrating a shiny new object in their trophy case.