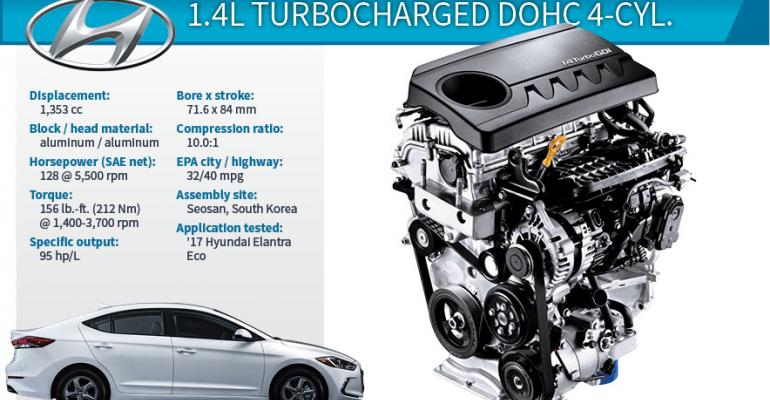 Time and again, Hyundai has demonstrated its ability to transform an engine that could be pedestrian in a modest grocery getter into something so much more. Its new pint-sized powerplant checks all our boxes.

It’s not a rule set in stone, but each year the budget-minded editors at WardsAuto are on the lookout for nominees among the Wards 10 Best Engines pool that are uncommonly refined and robust in their performance while being within reach for most American households.

Not everyone can afford (or wants) a BMW or Porsche, and yet all consumers are entitled to first-rate powertrain technologies, no matter how little they spend. Finding one of these – as we describe them – bread-and-butter engines that is wholly competent without hybrid-electric assist makes it all the more attractive.

This year, an engine fitting this description hails from Hyundai in the Elantra Eco compact car, priced out the door for $21,610, with floor mats, heated front seats, a rearview camera and destination charges included.

This 1.4L direct-injected turbocharged DOHC 4-cyl. from Hyundai’s new Kappa engine family is an absolute pleasure to drive. It makes 128 hp and 156 lb.-ft. (212 Nm) of torque, which doesn’t sound like much but is more than adequate for passing or freeway merging.

It faced stiff competition from the Chevy Cruze, which also bears a 1.4L turbo-4 that is extremely smooth. On paper, the Cruze engine actually makes more horsepower and torque, but it did not feel stronger than the Elantra Eco.

So the tiebreaker between these two champions of everyday motoring was fuel economy. In our testing, the best observed mileage in the Cruze was 33 mpg (7.1 L/100 km).

All the while, Hyundai’s new Kappa engine was poised, unobtrusive and exhibiting the maturity of a fully grown maple tree. Its noise levels are astoundingly low, sounding more like a smooth V-6 than a clattery 4-banger.

Today, the Elantra Eco, with a sophisticated and sporty 7-speed dual-clutch transmission, achieves the same 40 mpg and an impressive specific output of 94.6 hp/L. Feeling frisky? Switch on sport mode and take note as transmission shift points are delayed, allowing the engine to rev more freely, while maintaining its smooth demeanor.

Also meeting our demand for new technologies, the Hyundai engine’s cylinder head has an integrated exhaust manifold, while an electric wastegate actuator improves low-end torque and part-load fuel economy. The new fuel-injection system operates at pressures up to 200 bar (2,900 psi), and the company says a 350-bar (5,075-psi) system is in the works.

Two thermostats govern separate cooling channels for the head and block. The main thermostat for the head opens at a coolant temperature of 190º F (88º C), cooling the head and suppressing knock. The block thermostat shuts off coolant flow to the block until it reaches 221º F (105º C), resulting in reduced friction.

Time and again, Hyundai has demonstrated its ability to transform an engine that could be pedestrian in a modest grocery getter into something so much more. Its new pint-sized powerplant checks all our boxes.