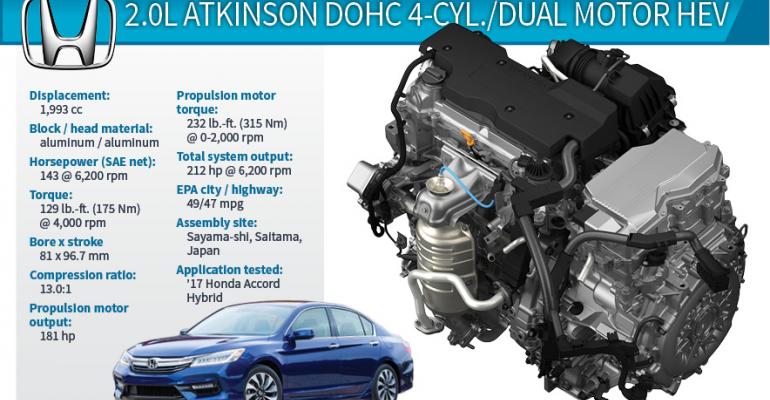 If Honda engineers suffer from an inferiority complex because rival Toyota gets all the hybrid love, the new Accord Hybrid gives them reason to stand taller today.

Engineers might disagree, but science plays merely a partial role in determining if a powertrain is truly great.

One of our scoring criteria for Wards 10 Best Engines is what we call “intangibles,” because some aspects of an evaluation just aren’t quantifiable. We can really like (or dislike) a powertrain and not know exactly why.

Over the past 23 years, we have tested dozens of hybrids and plug-ins, and some have made the cut with breakthrough technology and a pleasurable driving experience.

Now, some of these green vehicles are demonstrating improvements in power delivery and refinement to the point that “fun to drive” and “hybrid” can be uttered in the same sentence.

A case in point is the all-new Honda Accord Hybrid, one of three excellent gas-electric fuel-sippers making the cut in 2017. (Three made the 2016 list as well. For context, as recently as 2013, the Wards 10 Best Engines list had no plug-ins, hybrids or hydrogen-powered fuel cells – just good ol’ internal combustion.)

The Accord Hybrid impresses us with excellent throttle response, seamless transitions between gasoline and electric operation and a continuously variable transmission that – we’ve said it before and will say it again – is unrivaled in its ability to turn the wheels in a familiar, linear fashion without fuss and obtrusive noise levels.

Editor Dave Zoia says the Accord was the best hybrid tested this year and pays it the highest compliment of all: “You could drive this and not know it’s a hybrid. It’s a very normal drive experience, representing the best balance of performance and fuel economy.”

That’s not in a wonky subcompact but in a spacious, upscale 5-passenger sedan that’s closer to large than midsize. By the way, the EPA proffers a combined fuel-economy rating for the Accord Hybrid of 48 mpg (4.9 L/100 km) – a bogey totally within reach.

Motivation comes from a naturally aspirated 2.0L Atkinson-cycle 4-cyl. mated to a propulsion motor for total output of 212 hp. A second, smaller motor functions as a generator, feeding electricity to the propulsion motor and/or to charge the car’s lithium-ion battery pack.

Need more power for passing or sowing oats on a wide-open road? Experiment with the Accord Hybrid’s new Power mode, which adds battery assist to the traction motor for punchier acceleration.

This is only the second Honda hybrid to win a Wards 10 Best Engines trophy, following the 3.0L V-6 IMA gas-electric Accord in 2005. At the time, one editor topped 28 mpg (8.4 L/100 km), which was commendable back then but is downright lame by today’s standards.

If Honda engineers suffer from an inferiority complex because rival Toyota gets all the hybrid love, the new Accord Hybrid gives them reason to stand taller today.